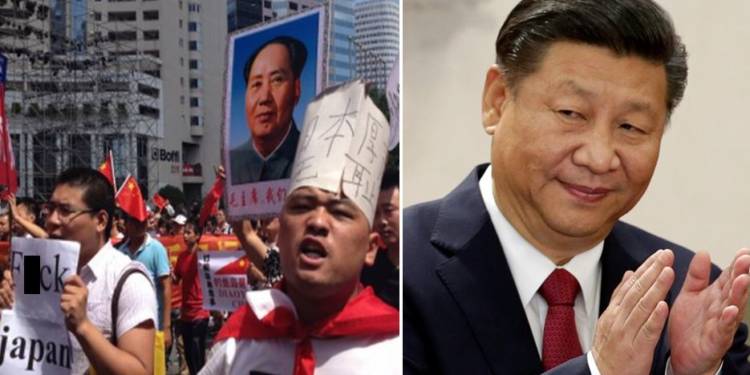 In 2012, when the Japanese government purchased the Senkaku Islands, a disputed island chain from a private Japanese citizen, widespread protests gripped China as hate-filled demonstrators took to the streets of almost every Chinese city against Japan. Protesters in many cities got violent and the Chinese government had to arrest demonstrators and put a ban on demonstrations.

Right from the beginning of the Chinese civilization, the geographical area that is today known as mainland China, resided primarily by Han people, had been under very nationalist and inward-looking rule historically. For centuries, successive Chinese generations promoted the idea that China is at the centre of the world and its ruler is “divine”.

So, contrary to Western countries where nationalism is forced from the top-down and is based on the enmity with neighbouring countries, China’s nationalism starts from the bottom-up. The Chinese people are so patriotic and high on nationalism that many times the Chinese government gets into trouble while catering to these overwhelming sentiments. 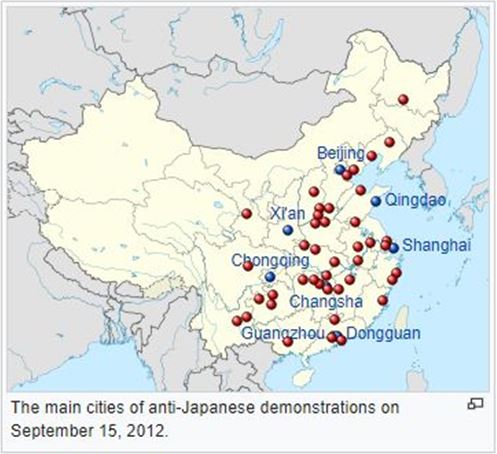 For a simplistic comparison, imagine protests in every Pakistani city after the abrogation of Article 370 by the Modi government. But, despite the fact that Kashmir is such an important issue for Pakistani domestic and foreign policy, the Pakistani people were not on the roads after India abolished Article 370.

But, in China, most of the citizens were on the roads with flags of Mao after the Japanese government purchased uninhabited Senkaku islands which China calls Diaoyu islands. This is just one example of Chinese nationalism that starts from the bottom-up.

After widespread protests in China, the Japanese vice foreign minister dubbed the furor as “unacceptable” and both countries were at the verge of war due to Chinese nationalism. The Communist government of China uses Nationalism to legitimize curbs on freedom and its corrupt single-party rule. But, many times, Chinese nationalism puts the interest of China in foreign countries in trouble, and post-COVID-19 pandemic, the nationalist surge is leading to the same frenzy.

“This is the great irony of Chinese nationalism,” said Florian Schneider, director of the Leiden Asia Centre in the Netherlands.

“The authorities rely heavily on nationalism as part of their legitimation strategy at home … [but] at the same time, that strategy risks derailing the national rejuvenation project that the authorities have promised their citizens.”

In the last few days, many articles that evoke the ultra-nationalist emotions of Chinese people are viral on Chinese social media- WeChat, QQ, and Weibo. Wechat had to delete thousands of social media accounts every week for sharing hyper-nationalistic fake news. In the last few months, many articles which claimed that China’s neighbouring countries want to unite with the country were viral on Chinese media.

One such article, titled “Why is Kazakhstan eager to return to China?” which claimed Kazakh people share deep historical ties with the Han people and want to unite with China, caused outrage in Kazakhstan. Zhang Xiao, China’s ambassador to Kazakhstan was summoned by Kazakhstan’s foreign ministry to answer on the article.

Another such article, titled “Why is Vietnam eager to return to China?” which was described by Chinese state media as “fabricated and misleading” caused diplomatic friction between the two countries.

According to Schneider, nationalism, and irredentist stories sell in China, as they re-emphasize deeply held beliefs of the Chinese people. “If some people find these statements click-worthy, it is likely because such stories of national glory confirm deeply held beliefs about China and its place in the world,” he said.

“Ironically, even though the authorities are now trying to curb the spread of nationalistic misinformation, they are responsible for having created the very context in which such misinformation now seems plausible.”

The deeply embedded nationalism has sailed in the country despite the authoritarian one-party rule, but it also pushed China to the brink of war with Japan. Now, in a pandemic-struck world, Chinese nationalism is leading to anger and resentment against the country and its people in many nations.

Riding on the nationalism wave, the Communist government is picking up trouble with every neighbouring country including powerful ones like India. The Chinese government has become very aggressive with its wolf-warrior diplomacy and this is turning the countries around the world, including former friends like Australia to turn against China.

But, this harms Chinese interest as countries around the world are uniting against China. Smaller countries like Vietnam are convincing other partners in Southeast Asia for a coordinated response against the dragon. The Trump-led United States is already waiting for the first provocation to act against China.

Even if bullets are not fired, the rising Chinese nationalism and the Communist government’s arrogance is causing tremendous damage to the Chinese economy as people around the world are rejecting Chinese goods. Given the fact China is an export-dependent country; the anti-Chinese sentiments would lead to the collapse of an already troubled Chinese economy. It would also accelerate the global movement against China’s ambitious Belt and Road Initiative (BRI), with the help of which it seeks world domination.

“If foreign public sentiment turns anti-Chinese, it threatens those projects that China is trying to launch across the region and the world,” said Schneider.

“Other governments, whether in Vietnam or Kazakhstan or elsewhere, might find it difficult to justify collaboration with a China whose angry keyboard warriors keep offending their citizens.”

Therefore, Chinese nationalism, if not checked, would pave the way for Chinese isolation, and would cause immense damage to its global ambitions. In 2012, Chinese authorities avoided a war with Japan by cracking down on demonstrators, but a Xi Jinping led China is more reckless than it was in 2012.