Italy wants ITALEXIT! Italy is raging against the EU and Giuseppe Conte may not be able to stop Italy now 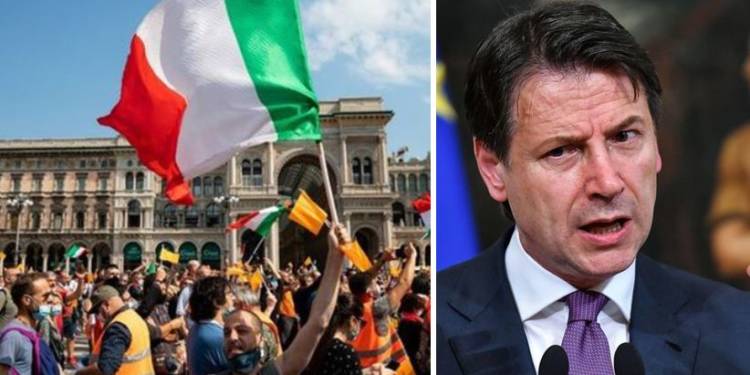 The European Union has failed its member-States. The bloc could neither stand up to Chinese bullying nor could it withstand Turkish aggression in Libya. The Brussels-based organisation has also failed to assuage Coronavirus-battered economies. The third-largest EU economy, Italy for example, kept asking for financial aid and Corona bonds but the intergovernmental bloc dominated by Berlin has refused to rescue it.

Consequently, Euroskepticism is on the rise within Italy. Opinion for leaving the EU is building up within the country, and an Italian Senator Gianluigi Paragone has even decided to launch an Italiexit-styled party next month which will aim “to take Italy out of the EU and the eurozone.”

The Italian Prime Minister Giuseppe Conte, who is an ardent supporter of the European Union, is now finding it hard to check the growing anti-EU sentiment within his country.

The demands for Italexit are not new. Since around 2017, there has been a constantly growing opinion within Italy about leaving the intergovernmental bloc. The left-liberal policies of the European Union have disenchanted people across the EU. They blame these policies for every crisis that they have faced in the recent past. This has led to the ascendancy of right-wing sentiment in all countries including Italy.

Be it the financial crisis in the EU or the immigrant crisis that the intergovernmental bloc brought upon itself, conservative sentiments have been bolstered every time EU made catastrophic decisions. Italy’s case has been that much more exacerbated. It might be the third-largest economy in the regional organisation, but it’s heavily indebted with the Debt to GDP Ratio hovering around 130 per cent. The Italian economy is in bad shape.

The Coronavirus Pandemic has further debilitated an already fragile Italian economy. Italy is amongst the hardest hit, not only in terms of COVID-19 casualties but also in terms of economic damage. According to the International Monetary Fund (IMF), the Italian economy is going to shrink by 9 per cent this year as opposed to the average of 7.5 per cent in the Eurozone.

One of the reasons why the Italian economy has been ravaged is that the most productive region in the country- Lombardy that accounts for 22 per cent of the Italian GDP has been disproportionately hit hard by the Pandemic. Further, the high Debt-to-GDP Ratio has limited Rome’s ability to tackle the economic downturn. It is for times like this that a country joins an intergovernmental bloc like the EU. However, the EU has let Italy down accelerating calls for exiting the bloc.

Conte who has always asserted that Italy will grow within the larger European Union fold looked up to EU for help. Along with countries like France, Conte has been pushing for the issuance of debt, that is, Corona bonds, to raise long term finance that would help the markets devastated by the COVID-19 outbreak.

But the EU is divided sharply over this issue. There is another faction within the EU which opposes the issuance of long-term bonds. A broad consensus from Vienna to Berlin to Helsinki against Corona bonds. Led by Germany, this faction of the bloc has long been opposed to raising debt at the European Union level.

Only 43 per cent of Italians want to stay within the EU and also retain the Euro.

Support for leaving the EU & Euro increases in Italy; more than one in three now want to exit both (+1.2 on last week)

According to a survey conducted by Tecnè, an Italian consultancy group also 42 per cent Italians want to exit the EU. The numbers have risen sharply from 26 per cent in November 2018. The anti-EU parties within Italy have stepped up the heat on Conte. They have also been opposing the idea of European Stability Mechanism (ESM) loans and this limits Conte’s options.

Conte himself seems to be giving in to the growing sentiment against EU, which is at odds with his otherwise passionate support for the bloc. Last year, he had said, “I remain firmly convinced … that it is within the confines of the European Union and not outside, that we must work for the good of Italians.”

However, earlier this year, he warned that the EU could fail over the COVID-19 outbreak.

For the far-right parties within Italy, the Brexit has shown the way. The UK has become a model for anti-EU Italian parties. They can now vouch for the benefits of expanding sovereignty and independent State policy after exiting the EU.

As the EU continues to ignore Italy’s plight amidst the Coronavirus Pandemic, the anti-EU sentiment in the country will only grow further and the ruling dispensation will have to ultimately give in. This could be EU’s biggest nightmare coming true. The third-largest economy exiting the bloc could set in a domino effect with other disillusioned countries also moving out of the EU. An Italexit could thus be the precursor of the EU disintegration.

Amid outrage over China claiming Vladivostok, a desperate Xi Jinping reaches out to Putin to ask for help against USA