Too bad for Xi Jinping 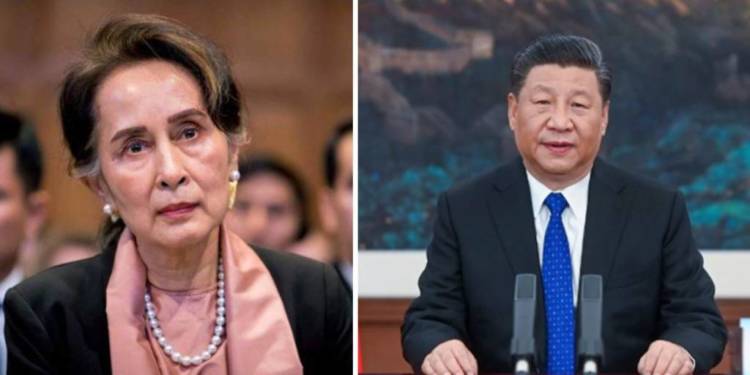 China has an eye for resource-rich countries. To fuel economic growth and manufacture goods for its 1.4 billion people, China needs an abundance of natural resources, and therefore, the Communist government traps the countries rich in natural resources. Myanmar, the country which shares borders with both India and China, is known as Suvarnabhumi (Golden land) in Sanskrit, given its richness in oil, gas, minerals, timber, forest products and hydropower potential.

Since 2010, China has worked on many projects in Myanmar. The people of Myanmar have repeatedly raised concern over the National Security Threat posed by Chinese projects and protested against them. A few of the projects got cancelled due to people’s protests.

The Myitsone dam project, a huge hydroelectric dam on Myanmar’s Irrawaddy River that is the largest source of fresh water in the country, was stopped due to widespread protests. State-owned Chinese companies started work on the project back in 2009 when Myanmar was ruled by military junta and West has imposed sanctions on it. The Communist government of China was the only supporter of Myanmar’s military junta in the international forums. But, as Myanmar transitioned to civil-military democracy in 2011 and West loosened the sanctions against the country, the civil-military regime stopped the project.

If the “people’s will” is against it, we cannot go ahead with the project, said Thein Sein, former President of Myanmar (2011-2016), who looked after the transition of the country from military junta to semi-democracy. Myanmar credited the suspension decision to the “people’s will, and many analysts have thus attributed the unexpected suspension to the victory of popular anti-China sentiments and anti-dam movements, following Myanmar’s domestic political transition.

Two other Chinese projects- Letpadaung copper mine and Kyankpyu port- have also witnessed widespread protests from the people of Myanmar. The problem with China and its sponsored projects is that the people of Myanmar are inherently anti-China and they do not trust Chinese with anything, given the historical tension between two countries and People Liberation Army’s support to separatist and Maoist groups in Myanmar.

The expansion of the copper mine, for which Chinese companies grabbed thousands of acres from farmers without suitable compensation, met with stiff resistance in 2011 and 2012. Police were forced to use brutal force to disperse the protesters. In 2017, Amnesty International, in a report, stated that the project was “plagued by human rights abuses” and urged the Myanmar government to suspend the operations. If the “people’s resistance against the project continues, the government led by Aung San Suu Kyi might suspend it soon, and Kyankpyu project would have met the same fate given the popular uprising against it.

In 2018, the Myanmar government signed MoU to establish China Myanmar Economic Corridor (CMEC) on lines of China Pakistan economic corridor. But, now the government of Myanmar is considering unilateral suspension of CMEC projects amid the reports that the Chinese businessmen are defrauding its people to fund the terrorist organizations in Myanmar which have waged war against the government. Crisis Group, a Belgium based think tank that specializes in conflict watch, reported that a Chinese businessman defrauded a million Chinese investors through a Ponzi scheme to provide financial support to United Wa State Army (UWSA), Myanmar’s largest ethnic armed group.

Brig Gen Zaw Min Tun- the spokesperson for Tatmadaw (Myanmar military) said that– Arakan Army, Ta’ang National Liberation Army, the Kachin Independence Army the Shan State Army-North, and United Wa State Army (UWSA) – all of which are ethnic rebel armies based in Myanmar’s northern province which share a border with China’s Yunnan province- are being supported by Chinese businessmen and the Chinese Communist Party.

As per a report by WION, “Myanmar seems to be fairly cautious (about CMEC), learning from past bad experience of $3.6 billion proposed Myitsone Dam project, which got suspended nearly 10 years ago due to strong local opposition and doubts over Chinese infrastructure policy of leading the countries to debt trap.”

China has little respect for the sovereignty of neighbouring nations. It actively supports terrorist groups that wage war against the government of neighbouring countries. Even if the Chinese Communist Party has to loot its people to finance terror operations in the neighbouring state, as in the UWSA case, it is not going to hesitate. And therefore, countries like Myanmar are willing to dump China’s Belt and Road Initiative and seek closer ties with India.

China harasses Vietnamese fishermen with impunity. Not anymore. US has come to its rescue