Pakistan has become a headache for China 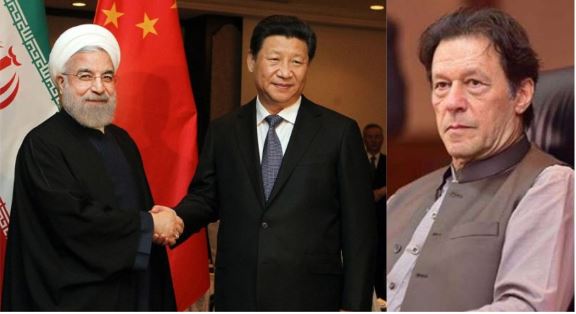 Following the inaccurate reports about Iran pushing India out of the Chabahar-Zahedan rail project, Pakistan’s Foreign Minister Shah Mahmood Qureshi couldn’t hide his obsession with India. Qureshi said that India was dropped out of the key rail project due to India’s “wrong policies”. The Foreign Minister of the terrorist country claimed that India was spoiling its relations due to its “Hindutva mindset”.

Qureshi’s claims are wrong. Tehran has maintained that it is very much clear that it is still engaging with New Delhi for the Chabahar project. Meanwhile, Islamabad was celebrating false reports of India’s reduced role in Iran due to Chinese intervention, but the Imran Khan government fails to realise that Beijing’s increased influence comes at the cost of snubbing Pakistan.

As the Xi Jinping regime invests in Iran, the China-Pakistan Economic Corridor (CPEC) faces the risk of getting jeopardised.

China has realised that Iran is a much better deal compared to Pakistan. Beijing wants to invest in this part of the world because it offers direct connectivity to the Indian Ocean via the Persian Gulf. This allows China to bypass the Strait of Malacca and Indian influence in its oil supplies and trading routes. In this sense Pakistan holds equal, or in fact, lesser strategic value than Iran.

Iranian ports are closer to the most important oil choke-point of the world- the Strait of Hormuz and this gives China an added advantage. From a geo-strategic point of view Iran is slightly better positioned than Pakistan.

Moreover, from a practical standpoint, Iran is in a much better option than Pakistan. The China-Pakistan Economic Corridor (CPEC) stands threatened due to the Baloch struggle for independence and India’s growing assertiveness about Gilgit-Baltistan. China’s main investment in Pakistan is the 62 billion Dollars CPEC initiative, which is also a part of Xi Jinping’s flagship- BRI.

The CPEC originates from China-occupied Xinjiang passes through the Indian territory of Gilgit-Baltistan which is presently under the illegal occupation of Pakistan military and finally moves into the Balochistan province of Pakistan, connecting China to the Gwadar port. CPEC stands on thin ice because India reserves the right to reclaim Gilgit-Baltistan. The day this happens, the CPEC itself would get dysfunctional.

Moreover, the Chinese interests and investments in the Balochistan province have come under attack of the Baloch freedom fighters. Earlier, the Balochistan Liberation Army (BLA), an armed organisation that wants to liberate Balochistan from Pakistani occupation, used to attack Pakistani security personnel and Pakistan Punjabi settlers or encroachers. But now they have started targeting Chinese nationals too.

Even in Gwadar which is really the main object of the CPEC investments has witnessed BLA attacks. Baloch freedom fighters now view the Chinese as the real occupying force, which is why they have started attacking Chinese investments.

Iran might be a disturbed country too, but at least it doesn’t have many territorial disputes to handle. Pakistan, on the other hand, mostly consists of occupied territories where investments regularly face the threat of getting jeopardised due to military conflicts or liberation struggles.

Moreover, Beijing has more to milk out of Iran than it can derive out of Pakistan. Iran is an oil-rich country and China is the biggest importer of Iranian oil. And as per the roadmap of a comprehensive 25 year-long Sino-Iranian strategic partnership, China is looking to invest $280 billion in the development of Iranian gas, oil and petrochemical products.

Beijing would want lucrative discounts to make the maximum out of its partnership with Iran. On the other hand, what can a debt-ridden Pakistan offer apart from the proposal to sell its territories to China?

Again, Pakistan’s political equations are something that endangers foreign investment. The relations between the civilian government and the Pakistan Army/ ISI remain complicated. Imran Khan isn’t really the man leading Pakistan, and the intervention of Pakistan Army/ISI exposes the CPEC to extensive corruption.

Pakistan’s foreign policy has a desperate anti-India streak attached to it. Before celebrating fake claims of India getting thrown out of the Chabahar rail project, Qureshi should have considered that the interests of his own country are getting jeopardised. India is a growing power and has sufficient diplomatic leverage in West Asia. But it is Islamabad which will be left to fend for itself, once Beijing dumps the terrorist country for a more comfortable option in Iran.