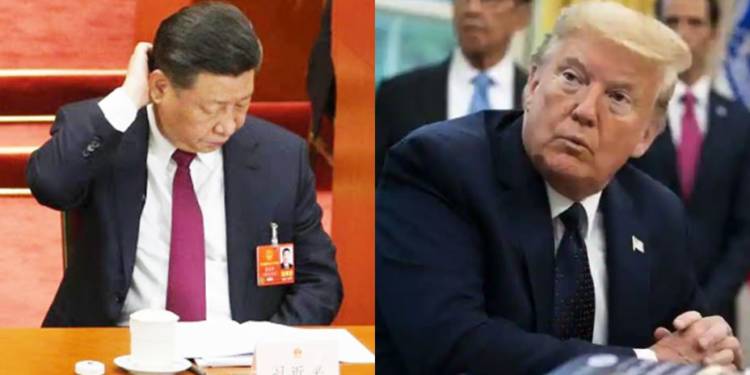 The feud between Trump administration and the Xi Jinping regime is getting uglier by the day. After the US drew first blood by asking China to shut its Consulate in Houston, Beijing on Friday retaliated by ordering the United States to shut its consulate in Chengdu. The Coronavirus pandemic has made a marked impression on the 41-year-old diplomatic ties between the US and China which seemingly have reached a point of no return. What started as a trade war has now metamorphosed into a full-blown cold war.

US senator of state for Florida Marco Rubio had mentioned that the consulate of Houston had become a massive spy center and the shutters that came down on it were long overdue. News reports had come in that the consulate members were burning important papers to possibly bury dirty secrets of espionage, just before the consulate was shut down.

#China’s Houston consulate is a massive spy center, forcing it to close is long overdue.

However, one cannot help but wonder why in retaliation to America’s move, China has closed a consulate which, to begin with, has been unheard of and why Beijing didn’t close other well-known American consulates when it had the chance.

In total there are six US consulates in China, along with one embassy in Beijing. The others are located in Chengdu, Guangzhou, Shanghai, Shenyang, and Wuhan. Not only this, but there is also an American consulate for Hong Kong & Macau too.

Closing the Chengdu consulate was the lowest level of retaliation that Xi Jinping could have chosen, perhaps after the weighing in on the consequences of the closes a more high profile American consulate like the one for Hong Kong and Macau.

Here are the possible retaliatory moves that Xi Jinping must have considered before being reminded of the ugly spat and the endgame of the trade-wars.

THE MOST AUDACIOUS ONE

The USA has been at China’s tail ever since it brought the highly controversial National Security Bill in Hong Kong. The US has time and again threatened China that it will take the special status of Hong Kong away if China continues to tread down this path. And therefore if China wanted to send a strong or rather audacious message to the US, it could have closed the US Hong Kong and Macau consulate.

Such a move would have sent a strong message to the US, but China could not afford to do so as the first phase of the trade deal is far from completion. Donald Trump and Mike Pompeo have previously warned China that if it didn’t honor the first phase of that deal then the repercussions could be heavy.

Hong Kong is the financial hub of the world and America by all means would have come down heavily on Hong Kong and its implications would have been felt far and wide to mainland China. Keeping these permutations and combinations in mind, China backtracked from closing US Consulate for Hong Kong and Macau.

Interestingly, more than 65 percent of people who took part in an online poll in China’s mouthpiece Global Times voted for the US consulate in Hong Kong to be closed a retaliatory measure. While the one in Chengdu that China ultimately closed only got 7 percent of the votes.

The other high-risk consulate that could have been closed were those in Shanghai and Guangzhou. Most financial and tech companies from the US operating out of China need access to these consulates to continue their business. Closing this consulate would have meant irking the business owners.

Also, the Guangzhou Consulate is the only US mission inside mainland China that sees American adoptions and immigrant visas. For this reason, the US State Department considers Guangzhou as the busiest consular post.

Closing any of these would have ended the Phase 1 deal and US action would’ve been imminent. The readers’ poll in Global Times had got 10 percent votes for closing the Guangzhou branch. In a separate poll by the news portal, Guancha 18 percent voted to close the US consulate in Guangzhou.

The embassy in Shenyang is an important consulate considering its geographical location. Shenyang in layman terms is America’s gateway to North Korea.

The closeness to North Korea is the reason this embassy remains extremely important for the Trump administration.

Due to the proximity of the border with North Korea, the American consulate has previously worked with local Chinese counterparts on issues related to North Korea, including nuclear non-proliferation.

If China had targeted Shenyang embassy then America’s two avenues would have been closed and it would have agitated Trump and invited further retaliatory measures.

The Wuhan consulate has assumed greater importance in recent times for being the epicenter of the global pandemic. The investigations that have started by America to trace the origins of the virus will surely go through the Wuhan consulate and cracking down on it would have insinuated that China is trying to cover its tracks.

If the US consulate in Wuhan were closed, America would have been provided the required ammo to attack China.

The Chengdu consulate that has been closed by China, out of the lot was the safest bet for China. Although the embassy lies close to Tibet and the US is moving along in the direction to raise its voice for Tibet, but in a pandemic world, freeing Tibet isn’t really up there in America’s plan of action list.

China took note of this and sacrificed the one consulate that would have invited the least amount of wrath from Trump administration.

China opted for a cautious approach when Washington DC closed a consulate that has the utmost strategic importance to Beijing. Xi Jinping and his army of wussies send their students/United Front activists to steal intellectual property and modern gadgetry from America using the Houston Consulate. According to an American Communist survey, over 72,320 China residents live in Greater Houston which should be enough to tell you the importance of the embassy.

China has been dealt a heavy blow and it so far has been measured but taking Beijing lightly can be a big fault as it always has some dirty trick up its sleeves.