China floods its villages to save its cities. Chinese media praises the supreme sacrifice of the villages 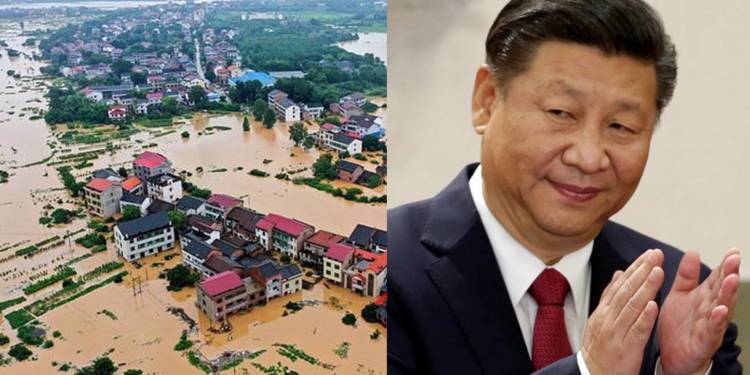 China is facing the worst floods since 1998, with water levels in the Yangtze river rising to record highs and putting the gigantic Three Gorges Dam at the risk of getting collapsed. Chinese authorities recently released seven spillways of water from the Dam although the downstream areas were already submerged. Unable to save its citizens, China has come up with brutal plan- submerge rural areas and save the bigger cities.

According to a shocking Epoch Times report, the Chinese Communist Party (CCP) authorities in Central China have started discharging excess rainwater getting accumulated in reservoirs and rivers into villages. Consequently, farmlands and houses in Jiangxi, Hunan, Anhui, and Hubei provinces are now inundated.

CCP authorities feel that if they do not divert floodwater into the countryside, then cities like Wuhan would become Ocean cities. Those living in rural areas are thus being made to sacrifice. Many flood victims are now without shelter, and with no help from the Communist authorities, they have set up tents in elevated areas.

Epoch Times has quoted locals as saying that in some cases the CCP authorities gave only a few hours to evacuate, therefore all that the victims of the man-made flood could manage was to take some clothes and valuables along with them.

Many flood-victims from the Jiangxi and Anhui provinces blame the local CCP authorities. The victims noticed that water is secretly discharged at night in order to alleviate the threat of floods in urban areas and sacrifice villages instead. Case in point being the Mengwa region of Anhui. Home to 1,95,000 people, Mengwa got submerged in floodwater after the authorities chose to discharge water from the Wangjia Dam in Funan County.

If you think that the CCP authorities are doing this clandestinely, then you are grossly mistaken. The CCP has no qualms about risking the lives of millions of villagers along the Yangtze river. The State media coverage reveals that there are 100 designated “flood storage” areas in China. These are low-lying areas that are prone to flooding due to their proximity to ferocious rivers.

The CCP allowed the authorities to discriminate between urban areas and the “flood storage” areas back in 2012, when China’s State Council noted that the local governments were free to discharge floodwater into these “flood storage” areas as and when needed. This virtually means that the CCP authorities reserve the right to decide which areas get submerged in floodwater in case of an emergent situation.

The State-run media has been unabashedly praising the ‘sacrifice’ of villages getting submerged in flood-water. And they also claim that it is only natural for people of the storage areas to encounter flooding. A TV anchor said, “Storing the floods means you need to open your door and let the flood enter your house. The homes of hundreds of thousands of Anhui people have been submerged.”

The anchor then tried to rake up shallow Chinese nationalism, and “praised” the Anhui people for “saving the country” by sacrificing their homes and property.

China Daily reported, “Villagers Make Sacrifice as Floodwaters Rush In,” thus reiterating the idea that Chinese villagers should sacrifice their lives and property for the sake of bigger Chinese cities. Such blatant discrimination in human life is peculiar to China.

Chinese authorities haven’t also tried rescuing villages from the artificial flood. Liu Gang, a business owner in Guzhen, Anhui said, “It is like a ghost town now.” He added that many of his neighbours are missing and are feared to have been washed away by the recent floods.

Therefore, mainstream media like Al Jazeera is only able to report “thousands evacuated” in China. There is literally no information about the hundreds of thousands facing the scourge of the devastating floods even as we speak. By submerging largely unknown villages, China is hiding its shocking incompetence.

The floods in China are turning out to be a stark reminder of how a Communist dictatorship works- human life doesn’t have much value and the administration gets to discriminate rather brutally. China is failing to save its citizens despite being the second-largest economy in the world and the diverted floodwater into rural areas reaffirms the level of inequality in the country.

The CCP works on the single-point agenda that every Chinese citizen is supposed to make the Party stronger. It may be a villager or a PLA soldier, the CCP reserves the right to discriminate and exploit at will for its own interests.

China had almost colonised Africa but then came US, India, Japan and Russia to kick it out

Countering China in its backyard: India’s soft diplomacy with North Korea will have a far-reaching impact