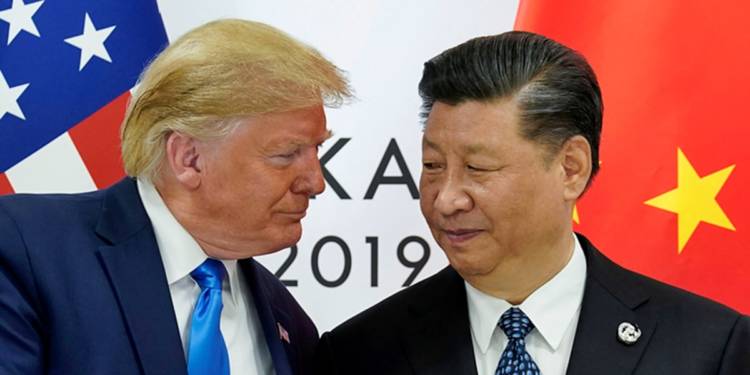 The US-China rivalry for tech dominance has entered the final stage, as the US President Donald Trump has started issuing ultimatums to Chinese tech companies. Trump has started with TikTok, but his crusade might soon end up consuming other Chinese apps also. The message is loud and clear- the US will not just protect itself from Chinese apps, but will also consume the gigantic markets built up by Chinese tech companies.

As per Economic Times, sources have said that the US President has agreed to give an ultimatum of 45 days to ByteDance, which owns the video-sharing app- TikTok. The ultimatum makes it clear that ByteDance will have to negotiate a deal with Microsoft Corp. within 45 days, otherwise TikTok will end up getting banned.

Trump has also said that any deal would have to include a “substantial amount of money” coming to the US treasury. He added, “Right now they don’t have any rights unless we give it to them. So if we’re going to give them the rights, then … it has to come into this country.” He added that TikTok owes its success to the US. The US President said, “TikTok is a tremendous success, but a big portion of it’s in this country.”

Not only is the US consuming a major Chinese asset, but also claiming a cut in the entire deal. China is visibly shaken with the latest manoeuvre and the Global Times Editor-in Chief, Hu Xijin expectedly suffered a meltdown.

Xijin tweeted, “This is an open robbery. The world is watching and God is watching that how President Trump is turning the once great America into a rogue country.”

This is an open robbery. The world is watching and God is watching that how President Trump is turning the once great America into a rogue country. pic.twitter.com/FaL3MkwsYe

Under the proposed deal to buy TikTok, Microsoft will take over the video-sharing app’s operations in the US, Canada, New Zealand and Australia. Moreover, Microsoft will ensure that the data of American users stay within the United States.

Trump recently announced that he was planning to ban TikTok, as the popular video-sharing app owned by a Chinese company faces the allegations of posing a national security threat due to the piles of personal data that it handles.

The Trump administration would fancy an American tech major buying the Chinese tech giants, as it would allow the US to avert security risks from the paper dragon without having to impose outright bans on apps that have millions of active users across the United States of America.

Moreover, such acquisitions also allow the US to create a more competitive digital world environment. If Microsoft acquires TikTok, for example, the ‘uncool’ tech giant will be able to challenge the two leading internet ad behemoths- Google parent Alphabet Inc. and Facebook Inc.

However, it would be naïve to believe that the US-China rivalry for dominance in the tech world has ended with the TikTok episode. TikTok is just one chapter in the larger economic and political battle between the US and China. And there are more Chinese apps on the Trump administration’s radar.

A group of 24 influential Republican Congressmen have insisted that the US President bans TikTok and other Chinese apps. They have drawn inspiration from the recent ban on 59 Chinese apps by the Modi government.

The letter written by the 24 lawmakers led by Ken Buck read, “In June, India took the extraordinary step of banning 60 Chinese-affiliated mobile apps, including TikTok, due to national security concerns. However, the CCP’s systemic campaign to collect and illicitly transmit user data for the Chinese government’s purposes is not unique to Indian consumers.”

However, now we understand that Trump will not ban dozens of Chinese apps in a single stroke, unlike India. The US President will handle one Chinese company (or app) at a time and ask them to choose between getting sold or getting banned.

It is also relevant to note that the US Secretary of State, Mike Pompeo too has talked about the Trump administration taking action against the ‘other’ Chinese tech companies doing business in the United States of America. Pompeo claimed that some Chinese companies are “feeding data directly to the Chinese Communist Party.”

Therefore, we do know for a fact that the Trump administration wants to take action against other Chinese tech companies too. The only name Pompeo has taken till now, apart from TikTok, is WeChat. Owned by the Chinese giang Tencent, this app describes itself as a social network, but it also facilitates payments, runs mini-programs and publishes news. WeChat could be Trump’s next big target.

The Trump administration has an entire action-plan ready. He will shatter China’s big tech dream by buying Chinese tech companies operating in the US, and he will also take a cut from Beijing in such acquisitions. If Chinese companies refuse to sell, they will get kicked out of the US. In the process, Trump is also telling the world that he wants the US to remain the internet king and it is not going to be a cakewalk for anyone to dislodge the US from this spot.

Forget Saudi Arabia, move over Iran and ignore Turkey – The UAE is the king of the Muslim World