After the mighty QUAD, India calls for an alliance with Russia and Japan to further isolate China

India is playing a masterstroke! 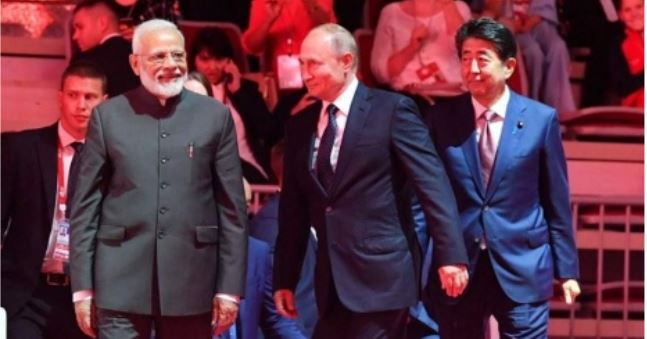 India has successfully made a major geostrategic manoeuvre in the Indo-Pacific by effectively roping in Russia in this Initiative. India and Russia are considering the possibility of forming a Trilateral Track-2 with Japan. Last week, Foreign Secretary Harsh Shringla discussed the Trilateral Track-2 proposal with the Russian Deputy Foreign Minister, Igor Morgulov.

By convincing one of its biggest strategic partners, Russia, so that the Indo-Pacific Initiative doesn’t exclude anyone and that the ASEAN is at the core of this Initiative, New Delhi is bringing Russia to the mainstream by roping in another regional player in its strategy to contain China.

It is important to note that, Russia has certain inhibitions when it comes to the Indo-Pacific; it even refuses to use the word ‘Indo-Pacific’. In January this year, Russian foreign minister Sergey Lavrov said that the Indo-Pacific Initiative was supposed to “reconfigure the existing structures in the Asia Pacific region to move from ASEAN centered consensus-seeking forms of interaction to something that would be divisive.

Verma was quoted as saying, “India and Russia share common interest..that the Indo-Pacific region becomes a region of peace, stability and economic prosperity so that no country seeks unilateral advantage at the cost of the entire region.”

Notwithstanding Russia’s inhibitions about the Indo-Pacific Initiative, New Delhi is making some strong overtures to Moscow, by bringing up a trilateral concept involving India, Japan and Russia. Japan and India have been working closely to co-operate on connectivity and other major projects in the Indo-Pacific Region in locations like Bangladesh, Sri Lanka, Myanmar and even Africa.

Together, India and Japan can convince Russia that they will help a sanctions-ridden Russian economy to cut dependence on China. Currently, the proposal is only at a conceptual stage but the offer to work on joint investments and projects with India and Japan would be too tempting as an offer for the Russian President Vladimir Putin to reject.

It doesn’t come as a surprise that the proposal first came up during the visit of Prime Minister Modi and his Japanese counterpart Shinzo Abe to the Russian Far East. Russia might keep claiming that the Indo-Pacific is exclusionary and superficial, but, the largest country in the world itself has a lot of interest in the Indo-Pacific which emanates out of the Russian Far East.

The Russian Far East has a Pacific coastline of over 4,500 kilometres. Moscow is growing increasingly insecure about its sparsely populated Far East because China has been eyeing this resource-rich region. Recently, Chinese wolf-warriors even staked a claim on Vladivostok, a Russian Far East city.

PM Modi himself became the first Indian Prime Minister to visit the Russian Far East last year. After a meeting between PM Modi and the Russian President, the Vladivostok joint statement was released. It stated that India agreed to, “Intensify consultations on complementarities between integration and development initiatives in greater Eurasian space and the regions of Indian and Pacific Oceans.”

The fulcrum of India’s foreign policy is based on marginalising China by building strong alliances with its key allies in the Indo-Pacific region. Russia will be the toughest nut to crack because of its inhibitions about the Indo-Pacific itself and also because a sanctions-hit Moscow has a strategic “axis of convenience” with China.

However, ultimately Russia will join hands with India in the Indo-Pacific as Russia has two main goals to achieve- one, getting rid of the sanctions imposed by the West after Crimea annexation in the year 2014; two, safeguarding its territorial interests in the Russian Far East.

New Delhi has successfully found a lot of common ground in the Indo-Pacific with Russia. If Russia joins in, India will be able to play a major role in rescuing Moscow from the Western world sanctions. Today, India is offering the country a joint platform with the third biggest economy of the world- Japan. Tomorrow, New Delhi might feel Russia in some kind of a rapprochement with Washington. Russia can therefore, bank on India’s global standing and goodwill.

Moreover, with the promise of joint development efforts in the Russian Far East, India can also help Russia to tighten up its grip on the vulnerable region. The ongoing process for the formation of a trilateral mechanism consisting of India, Russia and Japan could well turn out to be a shot in the arm for New Delhi’s Indo-Pacific policy.