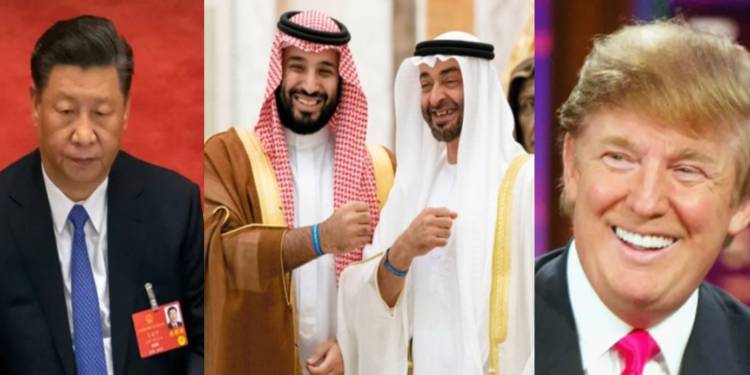 Who has been worst-hit by the UAE-Israel Abraham Accord to establish formal diplomatic ties? Not Iran. Not even Palestine. But, it is China. According to a latest SCMP report, a former Chinese Ambassador to Iran and the UAE, Hua Liming, has said that the US-brokered deal between Israel and the UAE was a part of Washington’s larger strategy to marginalise Iran- Beijing’s biggest economic partner in the region.

The former Chinese diplomat feels that the US is forcing its Middle East allies to choose Washington and snub Beijing, which is pushing the Dragon away from the strategically crucial region. Beijing seems to feel that the US has strategically influenced its Middle East allies to gang up on Iran at a time when Beijing is trying to use Iranian influence for increasing its foothold in the resource-rich region.

Notably, two key US allies- the UAE and Israel signed the Abraham Accord, days after the announcement of mega Chinese investments worth 400 billion US dollars in Iran. The purpose of the investments from a Chinese perspective was to augment Beijing’s influence in the Middle East by gaining more control over Iran’s strategic assets, human intelligence and proxy militias scattered all over the region like the Hezbollah in Lebanon or Houthis in Yemen.

However, Chinese strategic circles are now worried that the Palestine issue is going to get side-lined with the “full normalisation of relations” between the UAE and Israel. Consequently, Iran’s importance is going to decline terribly as its vow to ‘obliterate’ Israel from the face of the planet becomes more and more irrelevant. At the same time, an Iranian proxy, Hezbollah is also facing a massive onslaught in Lebanon.

As such, China feels that it is getting its Middle East allies to gang up on Iran in a bid to keep China at bay in the Middle East. This is why Hua Liming described the UAE-Israel Abraham Accord as a part of Washington’s wider Middle East Plan. Beijing is rattled at the prospect of a complete truce between Israel and the Arabs.

The former Chinese diplomat said, “What would come next could be the US continues to broker peace deals between Arab states and Israel to downplay the Palestine issue but to unite Arab states to suppress Iran.”

Beijing has believed that since the US is leaving a vacuum in the Middle East, and therefore it should get a major role to play in the region. But Washington isn’t letting the Dragon spread its tentacles. Hua said that the US was “pressuring Middle East allies to stay away from China”.

The former Chinese diplomat added, “Its allies globally are facing the difficulty of [having to] pick a side between Washington and Beijing. It could be a headache for the region which is in dire financial need.”

Such US pressure hurt Chinese interests in the region only recently when Pompeo warned that Washington could curb security ties with Israel over the latter’s China relations. On his Israel visit in May this year, Pompeo once again asked Tel Aviv to distance itself from Beijing and also voiced his opposition to the construction of world’s biggest desalination plant in the Jewish country.

The consequence of Pompeo-led opposition was that Tel Aviv chose a local company IDE Technologies over an affiliate of the Hong Kong-based CK Hutchison Holdings for the desalination plant.

For Beijing, the US-led decoupling of China in the Middle East is nothing less than a geostrategic disaster. The Middle East is critical for Beijing as 60 per cent of an energy-dependent China’s oil needs are fuelled through this part of the world. Hua describes the strategic passage from the Persian Gulf to the Strait of Malacca as “a matter of life and death” for the country.

And not just oil imports, China cannot afford to lose hold of the Middle East because it has huge investments in the Belt and Road Initiative (BRI) in the Middle East including the Gulf countries. Xi Jinping is trying to link economies like Oman, Saudi Arabia and the UAE with its transportation interlinking initiative.

The US is successfully getting the Arab world to gang up on Iran and by extension China in its latest powerplay in the Middle East region. China is rattled because it understands that the US is capable of harshly kicking China away from its allies. The US has done it in the United Kingdom and there is no reason why Washington cannot do it in the Middle East.

Ultimately, the US will form a brand-new Middle East alliance to meet the changing global needs and juxtapose it against the axis of the evil comprising rogue nations like Turkey, Iran, Pakistan and China. Beijing can see its future in the Middle East going to the dogs as the Arabs choose the US over China.