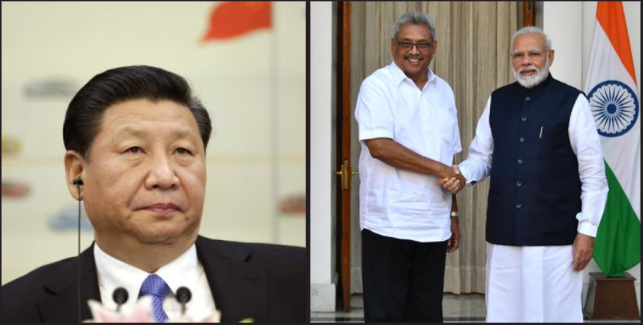 China’s sinister plan to surround India in the subcontinent by turning its neighbours against it seems to be backfiring as Sri Lankan government has iterated that its first priority will be India always and Colombo will follow an ‘India first’ policy. According to a report in TOI, Sri Lankan Foreign Secretary Jayanath Colombage has made a powerful statement that reaffirms the belief that ties between India and Sri Lanka are mending and that Beijing has been made to eat humble pie.

“President (Gotabaya Rajapaksa) has stated that in terms of strategic security, we will follow an ‘India first’ policy. We cannot afford to be a strategic security threat to India and we don’t have to be. We need to benefit from India. The president has clearly said that you are our first priority as far as security is concerned but I have to deal with other players for economic prosperity,” said Jayanath Colombage in a television interview.

In his remarks, the foreign secretary, the first from the armed services, said the decision to give Hambantota port on a 99-year lease to China was a “mistake”.

Hambantota Port has been a living, breathing example of China’s invasive debt-trap diplomacy. The controversial project came up during the tenure of former President Mahinda Rajapaksa and it was a major reason for deterioration behind Indo-Sri Lanka relations. Financed by the Chinese despite adverse feasibility reports and refusal by India for such a project, the port turned out to be a miserable failure.

While it became an example of Chinese “debt-trap” diplomacy, the port also became a matter of grave concern for India as it ensured Chinese presence at a strategic location in the Indian Ocean region.

What added to India’s woes was the fact that Sri Lanka after being unable to pay off the debt handed over the port and a mammoth 15,000 acres of land around it to the Chinese on a 99-year lease. This was strategically crucial for China as it gained foothold just a few hundred miles off the shores of India.

The island nation of Sri Lanka had veered off towards China in the last few years but with massive amounts of debt dumped on it by Beijing, the country has been looking for a way out, and India under PM Modi has graciously accepted the olive-branch extended to it by Colombo.

Within a fortnight, this is the second instance where a foreign country has shown its love and admiration towards India. Another island nation in South-East Asia—Maldives had recently poured its heart out when the Indian government extended ‘half-a-billion Line of Credit’ to help it crawl out of the sinkhole of China’s ominous debt-trap diplomacy.

PM Modi and his foreign policy are well and truly in perfect sync with the national interest of the country. His detractors who continuously chirped that India was losing its hold over the neighbours have been served a gentle but cold reminder by Sri Lanka’s ‘India-first policy.’

With the Maldives and Sri Lanka coming back into India’s fold, perhaps the Oli Government in Nepal might learn a lesson or two. Despite the short gains that China provides, it will always be India that these small countries will have to turn to in the end. New Delhi always looks over its shoulders to help its neighbours.