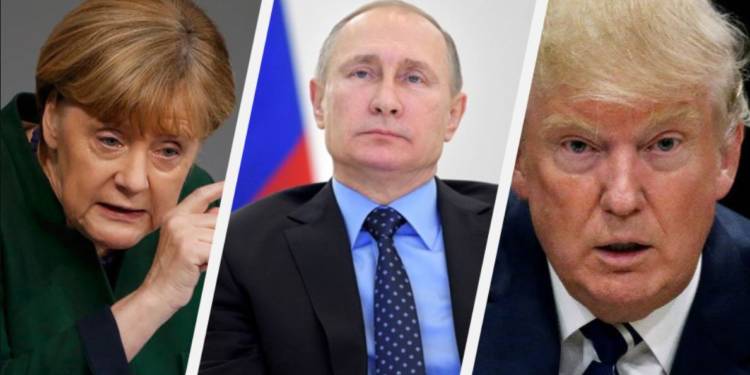 German Chancellor Angela Merkel has fired a fresh Salvo at the Russian President Vladimir Putin. In a latest bid to corner Russia, and hold back the possibility of a Trump-Putin alliance on China, Merkel is making a major issue out of the alleged poisoning of Russian opposition leader Alexey Navalny. The German Chancellor claims tests showed “unequivocally” that Navalny was poisoned by a novichok nerve agent in a bid to silence him.

It is not lost on us that Merkel has made bitter remarks about Moscow ahead of a possible Trump-Putin meeting before the United States goes to polls in November this year. It is being anticipated that Trump and Putin could find some common ground on China during this meeting, strengthening Trump’s global leadership against China and also sideline the EU for its weak position on Beijing. It seems Merkel is leaving no stone unturned in thwarting Russia’s mainstreaming.

Merkel has also indirectly pressed for more sanctions on Russia, saying that she will consult the NATO and the European Union for formulating an appropriate response over the poisoning incident. Merkel’s harsh remarks against Moscow are an attempt to resurrect a dying campaign for projecting Russia as the biggest enemy of the Western world, even as the focus of the democratic world keeps shifting from Russia to China.

On Wednesday, Merkel told reporters, “It’s clear that Alexey Navalny is the victim of a crime. The intent was to silence him.” She added, “It poses questions that only the Russian government can answer and must answer.”

The novichok nerve agent, which Merkel has referred, is often associated with the Russians. The nerve agent was also allegedly used in 2018 for an attempt to murder former Russian spy Sergei Skripal and his daughter on the British soil.

Germany is now using its influence in the European Union and Europe as a whole to mount pressure for more sanctions on Moscow. Lithuanian Foreign Minister Linas Linkevicius, for example, said, “Russian authorities stand behind this.” Linkevicius added, “Those responsible for such a cynical crime must face consequences. Not too many lines remain uncrossed.”

Merkel’s latest offensive against Russia and an irresistible urge to seek a ‘coordinated response’ against Moscow seems like one big, last attempt to reverse the course of Trump’s decoupling from China and proximity towards a tacit understanding with his Russian counterpart, Vladimir Putin.

Merkel knows that Europe and Germany will stand to lose if the US President Donald Trump successfully exploits the fault-lines within the shallow Sino-Russian “strategic axis of convenience”, in return for easing sanctions on Moscow. In the post World War-II phase, Western Europe has emerged as the biggest beneficiary of the US-Russia rivalry. Europe has enriched itself through the cross-Atlantic alliance with Washington in order to rein in the erstwhile Soviet Union and to some extent the present-day Russia.

However, Trump understands that Russia is no longer a threat to a US-led rules-based world order any longer. Rather, the US President wants to focus on China, while reading some kind of strategic understanding with Putin. The Russian President himself has no qualms about dumping China, in order to get rid of American sanctions and reviving the troubled Russian economy.

Consequently, it is the Indo-Pacific which is emerging as the venue of Great Power competition or a ‘new cold war’ between the US and China. It is now for Indo-Pacific powers like India, Japan and Australia, as well as the ASEAN member-States to enrich themselves as they are the ones located in the strategic hotspot of the world. In this context a Trump-Putin alliance will pull Moscow into the mainstream while sidelining EU.

To some extent, Germany also admits that the focus of the world is shifting from the Atlantic to the Indo-Pacific which is why Berlin has itself released an India-centric Indo-Pacific strategy. Yet, Angela Merkel dreads the long-run consequences of a Trump-Putin alliance (or strategic understanding)- the complete loss of geopolitical relevancy for the European Union and Germany.

Trump and Putin are at the brink of reaching an alliance and finding a common ground on China. But it is the German Chancellor Angela Merkel who stands in their way and is making last-minute attempts to slander Russia as the biggest enemy of the democratic world, while it is well-known that China is the biggest bully hurting democratic countries.

Apart from the strategic repercussions of a Trump-Putin alliance, Merkel also doesn’t want China to get completely surrounded in its own backyard given the special importance of Sino-EU trading ties to Berlin. Therefore, Berlin will continue to find ways for imposing sanctions on Russia, even if it means that the Merkel administration has to turn a blind eye towards the Great Purge currently underway in China and make a great deal out of the allegations of poisoning of the Russian opposition leader.

In her latest salvo at Putin, Merkel is hardly guided by her affinity for democratic values. In fact, her opposition to Putin is a desperate attempt to keep the EU relevant.

Cyprus has an old grudge against Turkey, US is empowering it to vent it out