It was the most obvious choice 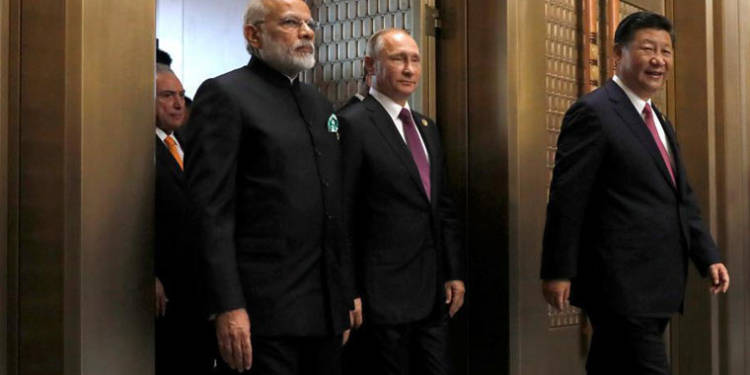 Over the last few months, India’s all-weather ally Russia through its actions has proven that it doesn’t support nefarious powers trying to corner its old-friend India. The biggest example of camaraderie between Indo-Russia ties came as a whipping slap to China when Moscow decided to accept New Delhi’s invitation to participate in the naval exercise named INDRA NAVY being conducted in the Andaman Islands near the Strait of Malacca.

The nefarious duo of China and Pakistan had been chirping incessantly after India backed out of Kavkaz-2020 but were given a harsh reality check when India clinched a diplomatic win. As the meeting between India and China went on in Moscow, Indian and Russian Navies were sailing near the strait of Malacca, in a strong message to China.

After refusing to participate in the military exercise in Russia where China and Pakistan were participating too, New Delhi played a masterstroke and invited it for a naval exercise in the Bay of Bengal which began yesterday. It is expected that India will field a guided-missile destroyer, an indigenous frigate, and a fleet tanker along with supporting helicopters whereas the Russian navy is sending two destroyers – Admiral Vinogradov and Admiral Tributs – as well as a tanker from its Pacific fleet.

China and its ally Pakistan denied arms by Russia

Reported by TFI earlier, Russia had announced the suspension of S-400 surface-to-air missile systems to China and also iterated that resumption of further deliveries was yet to be ascertained.

Russia’s S-400 Triumf is arguably the world’s best air defence system and Moscow’s decision to suspend the delivery of S-400 missiles is exposing the deep cracks in Sino-Russian relations.

The Russia-built S-400 Triumf or SA-21 Growler as called by NATO — is the world’s best operational long-range surface-to-air missile. Most of the analysts believe that the system at this point of time is unrivaled on earth.

To further show that Russia valued its Indian counterparts, the Russian Defence Minister assured New Delhi that it won’t supply arms and ammunition to another nemesis of India viz. Pakistan.

Islamabad and Beijing are thick as thieves and therefore snubbing them means that Russia wants to show its solidarity with India.

After the 15 June Glawan valley clash near the LAC, India’s Defense Minister had gone to Russia and asked for expediting the supply of arms and ammunition to India.

As per an SCMP report, the jingoist Chinese elements went up in arms as soon as Russia boosted arms sales to India following the violent face-off. To many CCP trolls within China, the increase in Russian arms sales to India seemed like a stab in the back. One Chinese internet user, for example, wrote, “While fighting your opponent, how would you feel if your friend handed over a knife to your opponent?”

Yesterday, the two-hour meeting between the Indian and Chinese delegations started at 9.30 p.m. Indian Standard Time, saw the border disputes discussed at length.

Some political pundits have stated that it was Moscow that pressurized Beijing to demand a Defence Minister level meeting with India and iron out the issues sitting across the table.

China usually walks into a meeting with leverage. This time it sat on the table without any leverage and instead, with desperation. The images released from the meeting showed a firm and strong body language from India’s defence minister Rajnath Singh whereas his Chinese counterparts looked like he was out of ideas.

Russia may have even pushed China to request for a meeting with India, because China has been embarrassing itself way too much and putting Russia in a spot with India.

Russian Media and its India-centric coverage

Russia Today, the Russian government-funded international televisions network has carried out favourable coverage for India in the India-China border standoff, to the surprise of many international relations enthusiasts.

In a half-hour program titled, ‘Conflicts w/ India, US, Hong Kong: Is China on the brink?’ editor Rick Sanchez explained the India-China border issue with a very Indian point of view. In the very opening line, Sanchez boldly says that 800-1,000 Chinese soldiers have entered the Indian territory of Ladakh. And later he insinuates that China wants to grab the beautiful region which is administered by India and all three parties involved in the region have accepted its claim.

This is largely a balanced view and is not fogged up with China’s propaganda against India which involves depicting India as USA’s puppet, and claiming that India is occupying Chinese territory.

We at TFI have written a series of editorials over the past four months exposing the cracks in the Sino-Russian “strategic axis of convenience” namely hegemony in Central Asia, Arctic tussles and Chinese claims over Vladivostok in the Russian Far East.

Recently, Chinese wolf-warriors even staked a claim on the Russian city of Vladivostok which prompted India to push Moscow towards a clear role in the Indo-Pacific.

Owning to the aforementioned scenarios and Russia’s closeness to India, Vladimir Putin’s government refused to deal with New Delhi’s two worst nemeses and Beijing is reeling from the cold-shoulder that Moscow has given to it in the last few months.