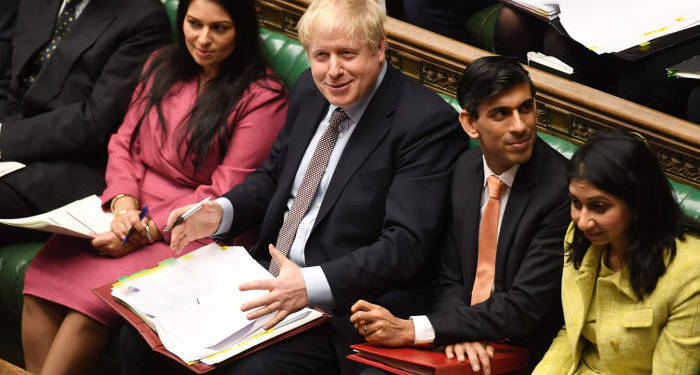 The rising Indian power figures in the West and especially the UK are steadily overcoming the Pakistani voices that used to dominate the space. The election of the Tories has ensured that pro-India bloc has replaced the pro-Pakistan bloc in the country which is consciously looking to decouple itself from Europe and the menace of Islamic fundamentalism.

In Boris Johnson’s cabinet, some of the most important portfolios including Finance ministry; Home ministry; and the Secretary of State for Business, Energy and Industrial Strategy are held by British Indians– Rishi Sunak, Priti Patel, and Alok Sharma respectively.

UK’s financial resurrection strategy amid the Coronavirus pandemic was devised by Rishi Sunak and chants of him being projected as the next Prime Minister of the British kingdom are steadily growing in pace.

Priti Patel, the UK’s current Home Secretary stands as an example of an indomitable spirit and grit, even in the face of a racist, sexist and offensive campaign which has been mounted against her by the Left and its proxies. The British Indian leader has drawn lots of hate from those obsessed with identity politics, as she dents their divisive narratives with her constructive politics.

She has brought in the revolutionary immigration policy of the UK which will curtail the refugee problem and simultaneously allow the highly skilled workers mainly from India to come into the UK. Most of the skilled PhD workers are from India, not Pakistan and Priti understands this fact.

Being of Indian origin, Patel also sensed the importance of nurses of Indian origin in the NHS and their contribution in tackling coronavirus, and therefore, allowed them a favourable visa scheme.

According to the new immigration policy, there will be a Health and Care Visa to give fast-track entry, dedicated support and a discount on the £610 standard visa application fee. The NHS visa as referred by PM Boris Johnson is a new fast-track visa for the health workers. The NHS visa holders and their immediate family members will also be exempted from the Immigration Health Surcharge.

Leaders like Sadiq Khan and Saqib Bhatti who used to be the face of Pakistani politics in the UK have seen their stature diminish in the last few years with the advent of British-Indian politicians. The likes of Sadiq Khan are the ones to be blamed for fostering an environment where fundamentalism has grown and developed.

Even UK’s Labour Party had to take a full-180 degree flip on its stance after its love affair with the pro-Pakistan bloc turned out to be the biggest cause of its defeat in the General elections.

Reported by TFI, the Labour Friends of India and new Labour Party leader Kier Starmer had released a joint statement in May, where he tried to wash away the antics of former labour leader Jeremey Corbyn.

“We must not allow issues of the sub-continent to divide communities here. Any constitutional issues in India are a matter for the Indian Parliament and Kashmir is a bilateral issue for India and Pakistan to resolve peacefully. Labour is an internationalist Party and stands for the defence of human rights everywhere.”

The former Labour Party leader Jeremey Corbyn had tried to toe Pakistan’s line in the election but eventually had to face a drubbing of epic proportions. The 1.5 million-strong British Indian Community, which had decisive votes in at least 40 constituencies, overwhelmingly supported the Boris Johnson led Conservative party in the elections, held in November last year.

Unlike the Pakistani populace of Britain, the Indian community does not vote in blocs, and therefore when Corby riled the diaspora, he was snubbed and it came at the cost of losing the crucial seats which otherwise the Labours would have in its bag.

Another reason why the pro-Pakistan bloc is losing favour in the country is that it is too radicalized. On the Indian Independence Day last year, members of the Indian diaspora in London at the Indian High Commission were attacked by Pakistani protesters gathered in thousands to observe the ‘black day’ as sponsored by the Imran Khan-led government of Pakistan.

The protesters were brought in from Birmingham, Nottingham and other places in coaches and carried Khalistani and Kashmiri flags. A huge part of the crowd turned into an angry mob that targeted members of the Indian community at the Indian High Commission.

This incident had raised serious questions about how the Mayor of London, Sadiq Khan, who is a British Pakistani, allowed such a massive protest to take place at such a time when clashes were plausible.

There is a reason why London has emerged as the hub of incidents where robbery, knife attacks and such demonstrations are the new normal. The growing Pakistani populace and their demands of separatism make it difficult for the authorities to curb the menace.

Europe, which once tooted its own horn of liberalism by welcoming refugees from the war-torn areas of middle-east and Africa, has now woken up to the existential threat that has been staring right in its face in the form of radical Islamism.

While the UK is somewhat liberal and the uprising of the Indian diaspora has somewhat culled the threat of growing radical Islamists, the same cannot be said about the rest of Europe.

According to Pew Research Center projections, in the coming decades, the Muslim share of the continent’s population is expected to grow – and could more than double. By 2030, people of Muslim faith or origin are predicted to form about 8% of the population of Europe.

Religious fundamentalism more often than not closes the eyes and ears of Pakistani Muslims to the unfolding reality of the modern world. Moreover, the doctored history that is taught in Pakistani madrasas turns facts totally upside down. The Britishers have understood this unique scenario and therefore the rise of British-Indians is an antidote to the Pakistani bloc which had threatened to raze the fabric of law and order in the country.

For the “disparity” between British Indians and British Pakistanis, Pakistanis need to look inwards. It is the culture of tolerance, non-religious obsession and importance of education that differentiates British Indians from their counterparts.