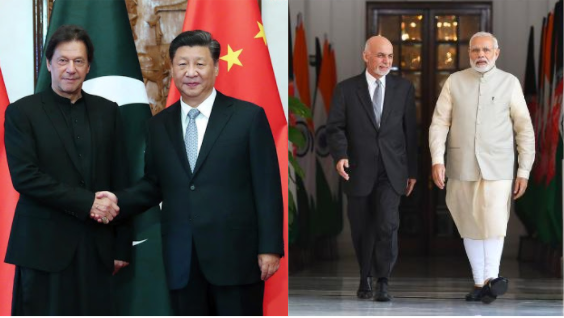 China being the dacoit-State that it is has found a new, vulnerable target– Afghanistan, a war-ravaged country– with unexplored mineral wealth running into an estimated 3 trillion US dollars. With Pakistan doing China’s bidding in Afghanistan, Beijing thought that it had a perfect opportunity to exploit Afghanistan’s vulnerabilities and loot its mineral wealth.

India’s External Affairs Minister, Dr S. Jaishankar’s remarks during the “intra-Afghan” peace talks at Doha, Qatar made it clear that India is standing firm with the civilian Ashraf Ghani government in Kabul. New Delhi is also ensuring that the Taliban is reined in and restrained from doing any further damage to the landlocked country. By cutting the Taliban to size, India is pushing back against China’s Afghanistan ambitions.

After the US withdrawal in Afghanistan, New Delhi has started dictating terms as far as bringing Afghanistan back to normalcy is concerned. Dr Jaishankar has himself made it clear that the ongoing intra-Afghan peace process must be “Afghan-led, Afghan-owned, and Afghan-controlled.”

India has issued a no-holds-barred warning to Taliban that Afghan soil shouldn’t be used against India and that the Islamist organisation cannot go about attacking minorities, tormenting women and imposing Shariah law upon Afghanistan.

India is capitalising upon its position as the biggest South Asian donor to Afghanistan with more than 400 development projects spread all across the landlocked country. India’s rebuilding efforts in the war-scarred country include schools, colleges, libraries, reconstruction of Afghanistan’s Parliament building and even a cricket stadium.

New Delhi is also doling out scholarships to Afghan students and leading efforts to pull the war-torn country out of the crisis that it finds itself in. And now India wants to use all the diplomatic leverage and goodwill that it enjoys in Kabul.

On the other hand, China’s modus operandi is to strengthen Pakistan’s hand to pursue its Beijing’s ambitions in Afghanistan. Although China is trying to hedge its bets in the war-torn country of Afghanistan, Beijing’s relations with the elected government of Afghanistan is no match for India’s massive goodwill in Kabul’s power corridors.

India’s Afghanistan strategy is therefore reaping rich dividends. New Delhi’s reconstruction efforts have made it indispensable not only for the Afghan civil society but also the Taliban. Sensing an opportunity, New Delhi has started issuing tough warnings to the Taliban, which has coerced the Islamist group to draw a safe distance from Pakistan.

Therefore, despite the ISI-Taliban nexus that Islamabad treasures, the Taliban itself has started snubbing Pakistan when it comes to the question of antagonising India. The Taliban has also developed cold feet about Islamabad’s monomaniac Kashmir agenda. In fact, the Taliban has bluntly clarified that it would not join Pakistan-sponsored terrorism in Kashmir.

Pakistan is no longer a legitimate stakeholder in Kabul today. India’s Afghanistan policy has successfully ensured that the Islamabad-Taliban nexus gets watered down considerably. Also, Pakistan never enjoyed any goodwill with the elected government of Afghanistan. But when India dictates terms in Afghanistan, it isn’t Pakistan alone which gets kicked out but China too gets booted out of the war-torn country.

At the end of the day, the fact remains that China’s influence in Afghanistan is largely dependent on Pakistan’s stake in the landlocked country. In this sense, China’s Afghanistan future doesn’t look very bright. India’s progress towards the vision of a China-Pakistan free Afghanistan, therefore, comes as a major shock for China.

Not only is India depriving Beijing of the hordes of mineral wealth in Afghanistan, but is also blocking China’s Belt and Road Initiative (BRI) in the region.

The China Pakistan Economic Corridor (CPEC)– a major segment of the BRI– has run into trouble for several reasons including the Baloch Liberation movement and widespread corruption in the Islamic Republic. Now, if China wants to build an Iran-based CPEC alternative, it will have to pass through Afghanistan. However, India seems to be successfully rescuing Afghanistan from China, which will turn out to be a major geopolitical disaster for the Dragon.

As China plans to take over Tajikistan, it is bringing India and Russia together and it is bad news for Xi Jinping