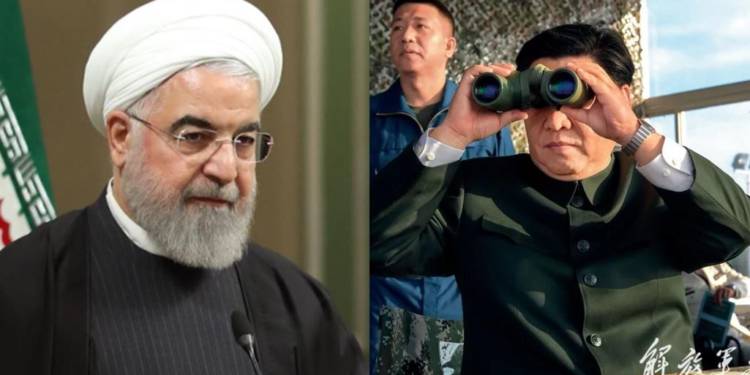 Iran has offered its soul to China on a platter, and the red-rogue middle kingdom is all set to buy out a sanctions-crippled Iran for a fair price. As reported by TFIPost earlier, China is buying out Iran and working to make it China’s client-state much on the lines of Pakistan in the next twenty-five years. This is a worrying development for the free world and democratic superpowers, as Iran turning into a North Korea in West Asia will have far-reaching consequences for countries like India, US, and France, among others.

Being reported by Oilprice.com now, China is all set to convert Iran into a full-blown surveillance state with just as much surveillance over Iranians, and the entire region, as there is over Chinese citizens presently, if not more. This building of Iran as the espionage capital of the world, by direct Chinese involvement no less has been facilitated under the super-secretive, yet tremendously strategic 400 billion-dollar 25-year deal between China and Iran. If the first phase of the said deal was supposed to buy out Iran, the next phase-– that of espionage in a 5000 km radius around Chabahar– is set to make Iran and its cities one of the most surveilled ones in the world.

Oilprice reported, the mass surveillance, monitoring, and control systems to cover Iran’s population is to begin its full roll-out from the second week of November.

As per a source, “The plan is for nearly 10 million extra CCTV [closed-circuit television] cameras to be placed in Iran’s seven most populous cities, to begin with, plus another five million or so pinhole surveillance cameras to be placed at the same time in another 21 cities, with all of these being directly linked into China’s main state surveillance and monitoring systems. This will enable the full integration of Iran into the next generation of China’s algorithmic surveillance system that allows for the targeting of behaviour down to the level of the individual by combining these inputs with already-stored local, national, and regional records on each citizen, together with their virtual data footprints.”

The most worrying aspect of this espionage super facility in Iran’s Chabahar is that work on it will start from November’s second week, if all goes well, and it is poised to be one of the biggest intelligence-gathering listening stations in the world. The facility will employ Chinese intelligence officials as the bulk of the workforce, and Russians will also be employed for handling equipment and technology. Interestingly, a minimal number of Iranians will be involved in the espionage centre, chosen from the top ranks of the Islamic Revolutionary Guard Corps in training only.

The intelligence-gathering centre, operated by the Chinese, will have a near 5,000-kilometre radius range focussed out of Chabahar, where India too has built a geostrategic port. An Iranian source was quoted as saying, “This will allow the station to intercept, monitor, and neutralize the C4ISR [Command, Control, Communications, Computers, Intelligence, Surveillance, and Reconnaissance] systems used by NATO members and associate members, including U.S.-friendly countries in the region, most notably, Saudi Arabia, the UAE, and Israel.”

China can, therefore, monitor and disrupt communications of its enemies across an area ranging from the edge of Austria in the West (including Greece and Turkey) to Egypt, Sudan, Ethiopia, Somalia, and Kenya in the south, and back to the East across all of Afghanistan, India, Pakistan, and Thailand.

We already know how China will buy out Iran for a whopping $400 billion, which will also allow it to build military bases and place its armed forces in the country at will. With the latest espionage angle of the secret deal getting leaked, however, China has been exposed as a country which is buying Iran to essentially carry out espionage not just within, but also, entire West Asia, also known as the Middle East. What is most worrying is Chinese involvement in the strategically located Chabahar, where India is developing a prized port. the red-rogue country’s ability to now monitor and gather intelligence from even South Asia, including India, while it strategically and militarily bases itself out of Iran.

The entire network of Chinese-operated intelligence gathering and monitoring from Iran, however, is directed at West Asia and the Gulf; not to mention the American and Israeli interests in the region. With the US mediating between Israel and various Arab nations, the region might just be on the verge of settling its civilizational enmity and ensuring lasting peace. Iran, however, is not happy, which is why it has allowed China to buy it out, apart from the crippling effect of sanctions on its economy. China is a new player in the region, and it has entered with massive and far-reaching disruptive plans.