Et Tu, Pope? Christians of China are suffering but the Vatican is busy blessing the Chinese Communist Party 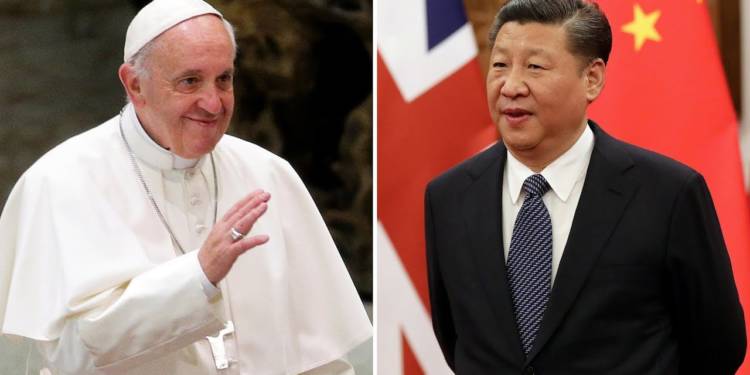 The entire world is watching how China is unabashedly violating the most basic human rights when it comes to the Uyghur Muslims in its far-Western Xinjiang province. Even more shockingly, the Chinese Communist Party (CCP) managed to torment Uyghur Muslims with the tacit and sometimes even open consent of the Muslim world. But now China has a new target– Catholics– and guess who is blessing the Chinese crackdown on Catholics? The Vatican itself.

The Vatican is preparing to renew a 2018 deal with China on the appointment of Roman Catholic Bishops in the Communist-Authoritarian country. The deal was described as a ‘sellout’ though the Vatican had hailed it as “the fruit of a gradual and reciprocal rapprochement”. Within China, the Catholic priests are worried, for the renewal of the one-sided deal will help the CCP crackdown on the Catholics, find a legitimised role in Bishop Appointments and also buy the Pope’s silence.

The 2018 Vatican-China deal will expire at the end of this month, and therefore a renewal is just around the corner. But critics rightly feel that the deal has only piled on the misery of Chinese Catholics and therefore, the renewal seems rather absurd. In fact, days before deal renewal, the CCP is sponsoring a crackdown on Catholics- placing dissenting Catholic priests under house arrest and allegedly letting hackers loose on the Vatican network.

Writing for Foreign Policy, Benedict Rogers, Co-founder and Chair of the UK-based Hong Kong Watch has accused the Vatican of “getting even deeper in bed” with China.

Benedict’s remarks aren’t without substance. For starters, the 2018 Vatican-China deal was signed in murky circumstances. The text of the deal remains a secret and no one, except the Pope and the negotiators, knows any details. But how the CCP has thrown Catholic priests into house arrest only last week shows that the deal must have given China an unfair upper hand.

Also, it has been reported that the 2018 deal does give the State-run Chinese Patriotic Catholic Association (CPCA) the right to choose a slate of nominees for bishop appointments, and the Pope makes a selection out of these nominees. Therefore, the deal enabled the anti-religion, Communist regime in China to play a role in Bishop Appointments.

The 2018 deal had therefore immediately triggered crackdown fears among Catholic Priests. Cardinal Joseph Zen, the former archbishop of Hong Kong had then said, “They’re [sending] the flock into the mouths of the wolves. It’s an incredible betrayal.”

The apprehensions weren’t far-fetched as China cracked down on underground Churches and Bishops that don’t have a CPCA registration after signing the deal. China has been demolishing and shutting down such underground Catholic Churches. At the end of the day, only those Churches would remain in China that are ready to join the CPCA.

The CCP General-Secretary Xi Jinping is himself sponsoring the violent crusade against Catholic priests in the country.

And it isn’t as if Xi Jinping has made any secret of his ambitions. During the 19th National Congress of the Communist Party of China in 2017, the incumbent CCP General-Secretary had said, “We will fully implement the Party’s basic policy on religious affairs, uphold the principle that religions in China must be Chinese in orientation and provide active guidance to religions so that they can adapt themselves to socialist society.”

Therefore, Xi Jinping is forcing all religious practitioners to “Sinicize” themselves. And the CPCA is the one doing this job of realigning Catholic priests with the “socialist society”. Those who refuse to register with CPCA for personal reasons or show the desire of not getting ‘Sinicized’ are declared illegal and only those who are ready to imbibe CCP-backed characteristics are allowed to exist.

To be declared illegal as a Bishop in China means that the CCP will rob you of whatever religious freedom you still enjoy. As per Bitter Winter, a priest said that he was summoned by the CCP three times in two weeks. He added, “They told me that I would be prohibited from celebrating mass if I refuse to join [the CPCA]. They even threatened to punish me according to the National Security Law if I do.”

At the end of the day, it is the Vatican which has legitimised the CPCA. Vide the 2018 Provisional deal with the CCP government in China; the Vatican has implicitly consented to the CCP-led crackdown on ‘underground’ Bishops and Churches, which the Pope was supposed to protect. And now the Vatican is also ready to renew this sham of a deal, which is bound to pile on the misery of Chinese Catholics.

The Vatican complicity in Beijing’s anti-Catholic crusade is hard to miss here. Not only has the Holy See abandoned Chinese Catholics, but it has also refused to rake up some of the most contentious issues concerning China. Pope Francis raises injustices around the world every Sunday, but he skirts around issues like human rights violations in Tibet, Xinjiang and Hong Kong by a dictatorial-atheist regime in China.

The CCP is therefore not only tormenting Catholics but, also getting the protector of all Catholics- the Vatican itself to bless the brutal crackdown. Therefore, the CCP is silently heading towards unopposed “Scientization” of the Catholicism in China.

China had its eyes on Russia’s Far East, now India and Japan have teamed up to kick China out