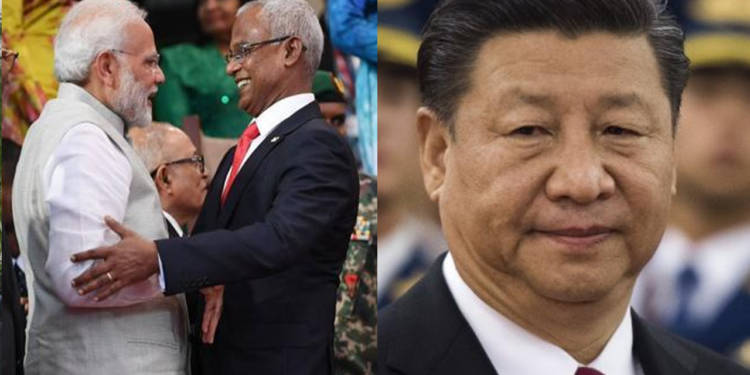 New Delhi has started sabotaging China’s Indian Ocean Region (IOR) ambitions. In the latest development, India has managed to rescue the Maldives from the Chinese debt trap. While a pro-India Ibrahim Mohamed Solih regime is in power in the Maldives, the big Chinese debt in the island country has remained a major concern but India seems to be overcoming this challenge now.

The Maldives President Ibrahim Mohamed Solih tweeted, “India has always risen to the occasion whenever Maldives needed a friend. My sincere thanks to PM @narendramodi, government and people of India for their neighborly spirit and generosity following the official handover of USD250 million as financial assistance today.”

Prime Minister Modi has also promised to continue cooperation with the Maldives. He tweeted, “Appreciate your warm sentiments, President @ibusolih! As close friends and neighbours, India and Maldives will continue to support each other in our fight against the health and economic impact of COVID-19.”

Appreciate your warm sentiments, President @ibusolih! As close friends and neighbours, India and Maldives will continue to support each other in our fight against the health and economic impact of COVID-19. https://t.co/esNRBWJxZg

Meanwhile, the two countries have also announced a ferry service that will connect India’s Tuticorin and Cochin ports to with Kulhudhuhfushi and Male ports in the Maldives. This is in line with the commitment made by PM Modi during his Maldives visit last year.

Union Minister of State for Shipping Mansukh Mandaviya said, “Fulfilled the important commitment of PM Modi to the Maldives last year. The service will increase people to people contact between the two countries and assist in ensuring food security and stable and predictable trade for the people of Maldives.”

The financial assistance is crucial since it comes at a time when the Maldives finds itself burdened under Chinese debt. The archipelago nation owes around $1.4 billion in debt to China. The sum is huge for a small country like Maldives having a GDP of $5.7 billion. And then, many analysts also believe that the $1.4 billion figure might be a misrepresentation. The actual debt is feared to be much higher than the official figure.

A Pandemic-hit Maldives would have no chance to make the repayment of Chinese debt given that the tourism-friendly country is witnessing the devastation of its tourism and construction sectors. And this is where India has come in to bail out the Maldives and rescue it from the Dragon’s tentacles.

In fact, last month also, India had announced that it would provide half-a-billion dollar funding to the island nation for several Infrastructure projects that will change the face of the archipelago. The 500 million dollar financial package consists of a grant of 100 million dollar and a new Line of Credit (LOC) of $ 400 million.

So, we are getting two major takeaways here- one, India is going to extend financial assistance and soft loans to China and two, New Delhi remains committed to bolstering tourism in the Maldives through a ferry service that should come as some sort of relief for the archipelago-nation.

New Delhi is giving some very important signals to the Maldives President Ibrahim Mohamed Solih. India understands that the Chinese debt issue that Solih is facing is actually a legacy issue of his predecessor Abdulla Yameen’s pro-China policies. The Maldives itself wants to remain India’s friend. In fact, he has chosen India and the US over China, and expects New Delhi to deepen ties with Malé.

Prime Minister Modi and the Maldives President Solih have been engaging frequently ever since Solih stormed to power in the archipelago-nation. When hit by the Wuhan virus Pandemic, the Maldives expected India to rescue it out of the Chinese debt trap and it seems India has delivered when it mattered the most.