Is Turkey about to be thrown out of NATO? There are some solid hints 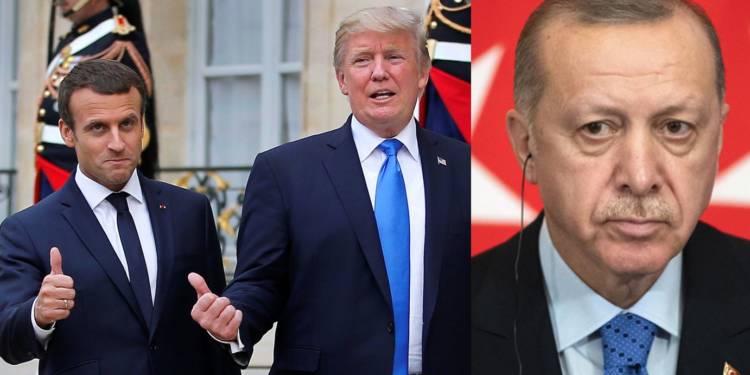 Erdogan’s Turkey is piling up enemies with every passing day, making many NATO members irked by its actions on multiple fronts. The latest Azerbaijan-Armenia conflict is creating divides which may force Turkey to parting ways with the NATO. These new developments have made NATO countries to take into account whether Turkey is even conforming to the basic principles of the organization or not.

The latest addition to the countries which are angry with Ankara is Canada. With Foreign Affairs Minister Francois-Philippe Champagne, the country is willing to halt military exports permit to fellow NATO member Turkey if the investigation determines the utilization of Canadian Technology for Human Rights Abuses.

It is happening at the same time when there is a big debate on sanctioning Turkey in the EU going on simultaneously. Cyprus said that it would only agree for sanctions against Belarus if strong measures are taken against Ankara for its exploration activities in the Eastern Mediterranean Sea. On the same lines, the European Commission president Ursula von der Leyen said, “There’s one [set of tools] for a situation where Turkey again takes unilateral actions and breaches international law. We can trigger them [sanctions] immediately”. For now, the European Union has put Turkey on notice, and it could face sanctions anytime by the end of the year.

Other NATO countries are now finding it tough to let Turkey run amok. The views of Ankara are going in the opposite direction to that of NATO, because of which, many of the member nations are angered beyond redemption. France is tackling Turkey in Libya, Greek national waters (Eastern Mediterranean) and now in the Azerbaijan-Armenia conflict. And being one of the founding NATO members, it has a lot of say in the matters pertaining the membership.

Emmanuel Macron is tackling extremist Islam in its own country, and he is not willing to let an Islamized Turkey do its evil deeds under the banner of NATO. On 2nd October, Macron said that “A red line has been crossed, which is unacceptable,I urge all NATO partners to face up to the behaviour of a NATO member (Turkey).”

To read more: Turkey Fry: France comes in support of Armenia. That’s France and Russia together against Turkey

In the case of the USA, since the Letter from Trump to Erdogan came out, it is clear that Washington DC has partially accepted that Turkey is no more an ally. The statements by Trump are adding testimony to this. He said, “You don’t want to be responsible for slaughtering thousands of people, and I don’t want to be responsible for destroying the Turkish economy – and I will.”

The USA has also stopped most of the military equipment sale to Turkey. As per the senior Wisconsin Senator Ron Johnson (chairs the Senate Foreign Relations subcommittee for Europe), the USA is considering shifting its facilities from Incirlik Air Force Base in Turkey to an extension of US naval base in Souda Bay, Crete. The recent visits to Athens and Crete by Secretary of State Mike Pompeo solidifies the claim.

Almost all the founder nations are angry with the Erdogan led Turkey one way or another. Out of 30 NATO members, USA, UK, France, Greece and Canada are now directly conveying their disillusionment with the validity of having Turkey as the member of this organization. It is expected that the situation will escalate, because, Ankara is not willing to back down and if the NATO members need to take actions against Ankara, it will need to be kicked out of NATO first.

As mentioned above, there are some solid hints which tell us that Turkey is bound to be countered by the Western Democracies, and Ankara’s membership in NATO proves to be a roadblock for countries like France and the USA to directly confront the ‘not-at-all statesman’ like Erdogan in his tryst to plunge the whole world into chaos. With the EU sanctions under consideration, the USA moving its facilities out of Turkey and France’s resolute attitude to counter Ankara, it is highly probable that Ankara will be kicked out of NATO very soon.

With one push, Vladimir Putin is bringing Russia back to its Soviet days glory