Justin Trudeau is a changed man after a shameful defeat at UNSC. His latest actions against China and Turkey prove that 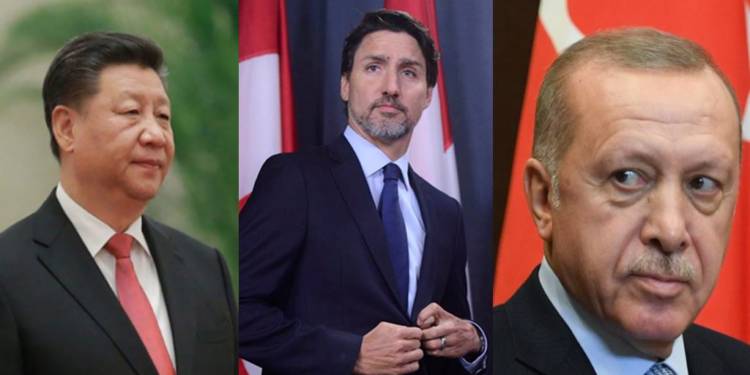 The catastrophic defeat of Canada at the United Nations has woken the peace-loving Prime Minister of the North American country – Justin Trudeau, from his deep and utopian slumber, which necessitated that under his rule, Canada will linger on to issues that are anything but important with respect to the geostrategic realities of the present world. Having lost the UNSC non-permanent seat elections from ‘Western Europe’ category to Norway and Ireland, Justin Trudeau is directing Canada towards a marked departure from the previously redundant foreign policy of the country, which made it a laughing stock in the eyes of many.

In the recent clashes which have erupted between Armenia and Azerbaijan since Sunday last, the role of Turkey has been well established as a rogue state pushing its proxy – Azerbaijan to indulge in armed conflict with its Christian-majority neighbour. Armenia has accused Turkey of redeploying fighters from Syria and F-16 fighter jets to support Azerbaijani forces, even as the Erdogan-led country has openly sided with Azerbaijan in the ongoing conflict, despite being a NATO member.

For its misadventures, Canada, which is also a NATO-member, has now decided to pull the plug off Turkey, as Prime Minister Justin Trudeau orders an investigation into the alleged usage of Canadian tech in the ongoing conflict between Azerbaijan and Armenia, thereby, leading to human rights violations of the innocent civilian populace. It was recently reported that Canadian imaging and targeting systems were being used on unmanned drones. Canadian Foreign Affairs Minister Francois-Philippe Champagne said that he was willing to halt military export permits to Turkey if the investigation determines Canadian technology was leading to human rights abuses.

The explicit position of Canada against Turkey, supplemented by an indication that the Trudeau administration would take stern steps if the investigation found Turkey guilty, comes as a stamp of authority over recent chatter of Canada pursuing a radically transformed foreign policy, one which is in larger consensus with the free and democratic world order. It is in line with the same changed and aggressive foreign policy that Canada has been taking the red rogue state of China head-on.

When, a few months ago, a Canadian court dismissed Huawei executive Meng Wanzhou’s application for “double criminality”, hence paving the way for her imminent extradition to the US, China came out all guns blazing against the judicial ruling, following which Trudeau took a rare swipe at Beijing and said, “Canada has an independent judicial system that functions without interference or override by politicians.” He added, “China doesn’t work quite the same way and (doesn’t) seem to understand that we do have an independent judiciary from political intervention.

The issue of Canada holding up Huawei CFO Meng Wanzhou in house arrest, while making arrangements for her extradition to the US, is an emotive topic for China, particularly its CCP regime. Meng’s father is Huawei founder Ren Zhengfei, purported as a close friend of Xi Jinping and an astute CCP-loyalist. China has been desperately attacking Canada diplomatically over the arrest of the Huawei CFO and has even indulged in brazen tit-for-tat hostage diplomacy against Canada.

On the issue of China indulging in hostage diplomacy, Justin Trudeau said, “If the Chinese government concludes that detaining (citizens) is an effective way to gain leverage over Canadians and the Canadian government, to randomly arrest Canadians, then no Canadian will be safe.”The Canadian Prime Minister further said that any regime would start arresting “random Canadians” to pursue diplomatic goals. He added, “To demonstrate to China that they can just arrest Canadians and they can get what they want out of Canada – even for us going against the independence of our judicial system – would be absolutely unacceptable.” This shows how Justin Trudeau has emerged as a changed man in recent past, ditching his dearly held redundantly humanist foreign policy.

As the pandemic was spreading across the world earlier this year, Justin Trudeau also took digs at China for the faulty equipment that they were producing for global supply. Canada’s public health authority had in April revealed that around 1 million KN95 respirators acquired by Ottawa from China failed to meet the Federal COVID-19 standards for use by frontline health workers. Justin Trudeau had also revealed that two Canadian planes that were sent to China to pick up shipments earlier this year, were forced to return empty, an incident which Canada said occurred due to the extremely busy nature of the Shanghai airport, which was a sarcastic jibe at China.

Meanwhile, Canada is working overtime to woo India, as Trudeau realises the futility of siding with Khalistanis and their Pakistani paymasters; which is why Canada took a U-turn in its support to the illegitimate Khalistan movement only recently. A spokesperson of the country’s Foreign Ministry told the Hindustan Times, “Canada respects the sovereignty, unity and territorial integrity of India and the Government of Canada will not recognize the referendum.” The statement further said that the bilateral relationship between Canada and India is a priority for the Government of Canada.

While Justin Trudeau’s foreign policy for so long was an unmitigated disaster, he now appears to be taking much-needed steps in the right direction to rectify all the mistakes that have been committed over the years under his rule, due to a lousy approach to diplomacy, guided by Trudeau’s far-left political leanings. The loss of face in the UNSC elections has served as a reminder to Trudeau that liberal values will get him and his country nowhere in the global scheme of things.

After Sri Lanka and Maldives, India is all set to free Myanmar from Chinese grasp