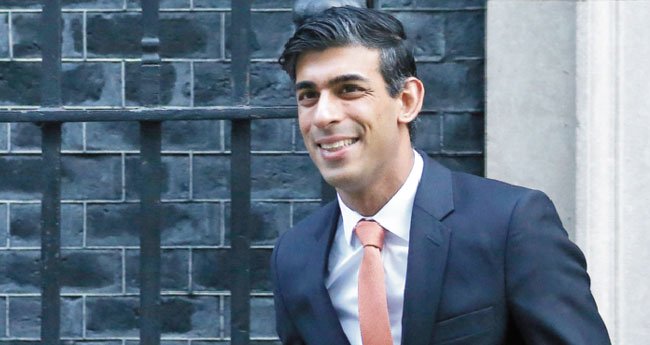 In a testament of how far the Indian community has come after the end of British rule, Rishi Sunak is believed to be the front runner for the post of UK Prime Minister.

While many leaders have seen their reputation being dealt a severe blow in the backdrop of the pandemic, Sunak’s star has only risen as Boris Johnson’s popularity reached at an all-time low both within his Conservative Party and the electorate, just 10 months after he steered the Tories to their biggest parliamentary majority since the 1980s.

At the heart of the matter lies Johnson’s absolute bungling of the Wuhan coronavirus pandemic in the UK as the country has recorded the highest death toll across Europe. In a major embarrassment, due to a technical glitch, which is believed to have been a Microsoft Excel error, the UK government failed to count 16,000 new positive cases.

While an increasing number of Tories are pushing to open the country and the economy by eliminating constant local lockdowns, Johnson seems to be determined to enforce lockdowns in a bid to get ahead of the virus much to the chagrin of his party MPs.

This has led to the Tories discussing the possibility of Sunak succeeding Johnson as his public conduct and calm demeanour coupled with his regular engagements with the Tories MPs has earned Sunak admirers across the party. Like was the case with Theresa May, it will be the Conservative MPs who will decide that who will be the next British Prime Minister or if the country will head for yet another general election.

A section of the Conservative Party believes that there is a lack of discipline in the Boris Johnson administration as the patience is running thin.

Rishi Sunak the de facto number 2 in the government due to his position as the Chancellor to the Exchequer, is fast emerging as the anti-dote to Johnson. Sunak is regularly engaging with the party MPs through his breakfast gatherings who in turn will eventually vote for the next leader.

One Tory leader was all praises for Sunak after attending one of his breakfast gatherings as he said, “He walks the walk of a prime minister.” He added, “People look at him and he’s smart, he’s pleasant, he’s polite. What’s not to like?,” with another Tory found Sunak to be “very engaging, brilliant, totally across the detail and very relaxed.”

He has also made it a point to reach out to the first time MPs who feel ignored and left out by Boris Johnson.

Recent polls too indicate Rishi Sunak’s rising popularity as a recent survey of the Conservative Party members revealed that 81.5% are satisfied with Rishi Sunak, while Boris Johnson for the first time ever slid into negative territory with a rating of -10.3% which is majorly down to Johnson’s insistence of local lockdowns – a stance on which Sunak has publicly disagreed.

Sunak who is married to Akshata Murthy, the daughter of Indian billionaire, Infosys Ltd. co-founder Narayana Murthy, attended Winchester College, one of the country’s most prestigious private schools, before studying at Oxford and Stanford Universities. After his graduation, Sunak worked for Goldman Sachs and continued to work for a couple of more firms where he went to hone his skills and enhance his reputation.

The 40-year-old has also not shied away from displaying his Hindu heritage as he took oath under the name of Bhagavad Gita. Earlier this year, the Conservative Home website anointed him “the next prime minister”.

Sunak, on his part, has handled the situation very gracefully by denying any intentions to move to 10 Downing Street.

During an interview, Sunak on being quizzed upon his intentions to occupy 10 Downing Street said, “No. Definitely not, seeing what the prime minister has to deal with – this is a job hard enough for me to do.”

He then revealed how he shares a close personal relationship with the UK Prime Minister as he said, “We have a close personal friendship which then spreads through the teams, where there’s an enormous amount of mutual trust.” He also claimed that their families are joined at the moment with Sunak’s two daughters “favourite thing in the world” was Johnson’s dog Dilyn.

While Sunak continues to publicly deny any intentions for running for the post of UK Prime Minister, it seems inevitable that an Indian will soon be the Prime Minister of the United Kingdom.