China came as an investor in Nepal and soon became the Master. Now an independence struggle has started 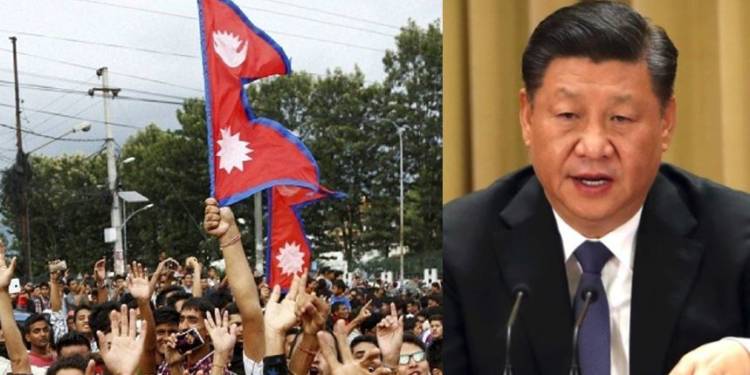 Denial seems to be costing the KP Sharma-led Communist government of Nepal pretty much, as it now becomes evident that the paper dragon – China has spread its fangs and tentacles deep into Nepalese territory along the Sino-Nepal border. In what is proving to be an expensive gamble for the Communist government of Nepal, which has been denying all possibilities of the Chinese having encroached upon the Himalayan country’s sovereign territory, the Chinese Communist Party now seems to have taken it upon itself to put on display its encroachment and illegal occupation of Nepalese land.

In what is being reported as a major flare-up in tensions between China and its steadily-turning client state – Nepal, Chinese security personnel on Saturday fired tear gas shells on a Nepalese inspection team, led by Congress leader Jeevan Bahadur Shahi. The Nepali team had come to monitor border pillars, vice-chairperson of the Namkha village municipality Pena Lama said. Lama also sustained eye injuries due to the Chinese firing, and said that the Chinese fired tear gas shells upon the team when they were inspecting pillar no. 9, after having inspected the border pillars numbered5, 6, 7 and 8.

Important to note is the fact that the said incident of firing by the Chinese on a Nepalese inspection team has taken place in Humla district, which has been in the news for quite some time, as locals and even opposition leaders of the district and country, respectively, have come out to accuse the KP Sharma Oli government of ignoring Chinese occupation of Nepalese land in the district, where the red rogue state has allegedly constructed nine buildings.

The Nepalese Foreign Ministry said in a press release that the recent construction of a building by China fell on the Chinese side and not on the Nepalese side as was earlier claimed by locals.“The Department of Survey, Government of Nepal, based on the official records, reports of the joint field inspection and boundary maps, has verified and confirmed that the said buildings are not located within the Nepali territory,” the Nepalese foreign ministry said. Yet, if the constructions are on the Chinese side, why did the private militia of the CCP fire tear gas shells on the Nepalese inspection team?

There is growing anger within Nepal, with citizens even taking to protesting against the Chinese encroachment of their land, even as a subservient government stares at the developments like a mute spectator. The only sign of the government of Nepal recognising the Chinese runover of their territory comes from the fact that the KP Sharma Oli-cabinet is looking to warm up to New Delhi, for which it even stalled the distribution of a highly fallacious book which could send ties between the two culturally-allied nations into a deep freeze. As reported by TFI, the book’s sole motive was to indoctrinate Nepalese youth with extreme hatred for India.

We had earlier also reported how China had eaten up Nepalese land in at least seven districts, even as the country’s Ministry of Agriculture took to revealing how China had begun occupying land in at least 11 places falling under four Nepali districts. The areas occupied by China are of strategic importance as most of the areas are the catchment areas of rivers. With Chinese aggression mounting along the Nepalese border, it becomes crystal clear that the Himalayan country’s land has been taken over by the CCP.

Are the US and China going to war? The latest statements of Pompeo and US NSA suggest so