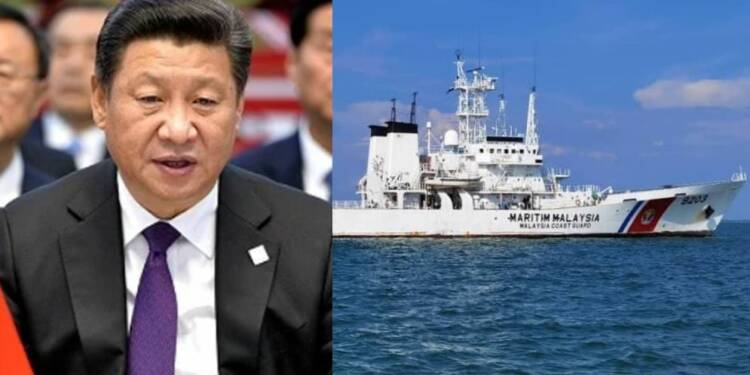 Chinese President Xi Jinping’s thirst for expansionism knows no boundaries. In the 1.3 million square miles of the South China Sea, Beijing unabashedly claims rights over the entire region when ASEAN countries like Malaysia, Vietnam, the Philippines, and others continue to give it a bloody nose. Now, according to a latest Reuters report, it has been brought to light that the Malaysian Maritime authorities stopped six Chinese fishing vessels in Malaysian territorial waters on Saturday last week and detained 60 Chinese nationals. All the detainees were caught during an operation off the eastern coast of Johor, the southern Malaysian state which borders Singapore.

Their vessels, all of which were registered in Qinhuangdao, a port in northern China, were en route to Mauritania, West Africa, when they trespassed in Malaysian waters. These fishermen more often than not are part of China’s maritime militia and encroach into sovereign waters of a country to gain a foothold and make way for the PLA-Navy to take over at later stages.

Even though ASEAN has become China’s largest trading partner, the countries in the alliance are constantly at loggerheads with Beijing in the international waterways.

China routinely intrudes into the territorial waters and the Exclusive Economic Zones (EEZs) of other countries in the South China Sea. The Philippines even secured a favourable ruling against China from the Permanent Court of Arbitration in The Hague over the South China Sea disputes.

But China continues with its hawkish policies in the strategic waterways by claiming “historical maritime rights” under the ‘Nine-dash claim line’ theory in utter defiance of the international maritime law, that is, the UN Convention on the Law of the Sea.

The Philippines Foreign Secretary Teodoro Locsin Jnr also disclosed that Duterte had raised the issue of incursions with Chinese President Xi Jinping, but “the reception was very cold”. Locsin had then shot out a stern warning to the Politburo of Beijing saying, “The Philippines will invoke its 69-year-old defence treaty with the United States if China attacks a Philippine naval vessel in the West Philippine Sea.

Reported by TFI, Vietnam’s ambassador to India, Pham Sanh Chau had met Indian foreign secretary Harsh Shringla in August and briefed him about Chinese transgression in the South China Sea near the Woody Islands and asked India to explore the region for oil and gas blocks.

The reason Vietnam had to turn to India was that China had deployed its H-6J bomber to the Woody Island, the largest of the disputed Paracel Islands. CCP’s mouthpiece ‘Global Times’ had termed the movement of the PLA troops to the region as a move to suppress the increasing US military activities in the region. The Paracel Islands lie over 180 kilometres away from the closest Chinese territory, yet, being the absurd nation that China is, the dragon claims the islands as its own. The Paracel Islands are rightfully claimed by Vietnam, and they are naturally furious with China’s aggressive posturing.

Vietnam, on several occasions, has called that China’s misadventures didn’t just violate its sovereignty but also “jeopardized” the situation in the area.

Even Indonesia has had just about enough of China’s misadventures in its sovereign territorial boundaries. In mid-September, a Chinese Coastguard ship had intruded into Indonesia’s Exclusive Economic Zone (EEZ) near the Natuna Islands. According to SCMP, Chinese vessel remained in Indonesia’s EEZ for two days before being driven off by an Indonesian patrol boat following a bitter radio argument.

Natuna Islands are becoming a major flashpoint between Indonesia and China. Jakarta is finally pushing back against Chinese aggression, even though Indonesia didn’t want to consider itself a part of the South China Sea disputes until now.

Japan in the East China Sea

Even in the East China Sea, China claims sovereignty over the Senkaku islands and calls them the Diaoyu Islands. The Islands are located strategically- far away from Japan and close to China. Therefore, the Senkaku constitute a major geostrategic advantage for Tokyo. The Islands serve as an unsinkable aircraft carrier for Japan, close to mainland China. It is for this reason that Beijing has been trying to constantly undermine Japan’s position in the Senkaku islands.

China has been exerting pressure near the Senkaku islands for the last eighteen months by inserting ships into Japanese waters near the disputed archipelago at will and ignoring requests to leave.

In the South China Sea, the Trump administration has been strategically deploying its military assets breathing down China’s neck. The US deployments in the disputed waterways have bolstered the ASEAN’s bargaining position, which has also started speaking up against the Chinese bullying. However, Xi Jinping and his minion Navy and maritime militia masquerading as fishing boats continue to create fluttering waves in the region. The time is ripe for the ASEAN nations and the QUAD to work in synergy to weed out China from the contested waterways and give the paper dragon a good beating.

Love over Nation? New South Wales Premier admits to having an affair with a China-linked shady politician