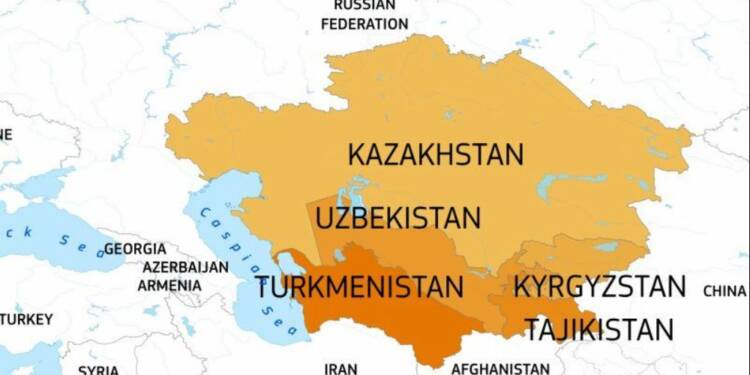 While geopolitical experts around the world remain obsessed with the Indo-Pacific, a big power competition is building up in Central Asia. And it is the region’s location which is bringing it into spotlight. In line with their nomenclature, the five Central Asian nations- Kazakhstan, Kyrgyzstan, Uzbekistan, Turkmenistan and Tajikistan are sandwiched between three Asian giants- India, China and Russia. Central Asia is also adjacent to the South Caucasus region, where Turkey is trying to become dominant.

Central Asia forms a huge connectivity junction, being located at crossroads of different regions. Till now, India, Russia and China were looking to pursue their interests in this geopolitically crucial region. But now the Islamist belligerent Turkey is also coming into the picture. Turkey has a lot to gain out of Central Asia from exploiting the region’s vast energy resources to fulfilling ambitions of becoming a leader of the Turkic Muslim world. Central Asia region is thus poised to become a quadrangular power contest.

Till now, Central Asian powerplay was all about investments and infrastructure. China’s BRI, for instance, focusses on Central Asia. Similarly, the Chabahar port project in Iran can be seen as India’s attempt to open a new gateway into the landlocked region. As for Russia, it believes that Central Asian nations being post-Soviet States, the region remains its exclusive “sphere of influence”.

But the player that is really looking to push the region towards uncertainty, instability and conflicts is Turkey. We know how Turkish President Recep Tayyip Erdoğan likes to convert differences into disputes, and simmering tensions into full-blown armed conflicts, and Ankara’s growing Central Asia ambitions should thus send warning bells ringing.

Of course, Central Asia isn’t free from dangerous power competition even right now. Russian President Vladimir Putin’s superpower ambitions remain very much intact, but his Chinese counterpart Xi Jinping has been eating into Russian space in Central Asia. Beijing has overtaken Moscow in terms of both trade and investments in this part of the world. Yet, the apparent friction between Russia and China over Central Asia has remained under the wraps.

And Turkey’s South Caucasus misadventures do have a Central Asia link too. Turkey lacks a direct link to Central Asia, a region, considered to be Russia’s sphere of influence, and the only roadblocks are Armenia and the Nagorno Karabakh Republic. Attacking Armenia and taking control of the Nagorno-Karabakh region is, therefore, a part of Erdoğan’s dreams to unite the Turkic world from Central Asia to Turkey under Ankara’s leadership.

Therefore, it is no coincidence that Ankara has suddenly started taking more interest in Central Asia. Till now, Turkey wasn’t speaking about Uyghur Muslims who are being tormented by China in its occupied territory of Xinjiang. But recently, Ankara expressed concern over the ongoing human rights violations of Uyghur Muslims in China-administered Xinjiang. At the United Nations General Assembly (UNGA), Turkey requested that the cultural and religious identity of Uyghur Muslims be respected and protected.

Turkey doesn’t really care for human rights though. Ankara is criticising China because it wants to play the Turkic Muslim card. Turkish President Erdoğan understands that there is simmering discontent within Central Asian countries like Kazakhstan and Kyrgyzstan over how Uyghur Muslims, who are also Turkic Muslims just like Kazakhs and Kyrgyz, are being tormented by China.

Moreover, Chinese concentration camps also target 1.5 million Kazakhs and more than 200,000 Kyrgyz living in Xinjiang. As such, Ankara feels that the best opportunity to expand its footprint into Central Asia is to assert its own identity as a Turkic Muslim power and amplify the Chinese human rights violations in Xinjiang.

Moreover, Russia’s waning influence in Central Asia is creating a huge power vacuum, which China is trying to fill in. And now Turkey wants to grab a share in this vacuum, which is in line with Ankara’s policy of challenging Russian interests everywhere from Syria to Libya, and Armenia.

Ankara’s plans are fraught with danger. If Turkey tries to get involved in the Uyghurs issue, its intervention will not be limited to a diplomatic offensive but go as far as raising Jihadist mercenaries for geopolitical purposes. Turkey can possibly plunge the entire region into militancy and conflicts effectively creating a new security threat from South Asia and Russia.

From the QUAD’s perspective, such powerplay in Central Asia is dangerous. Yet, the United States hasn’t shown much willingness to play a role in this part of the world. As such, it is upon India to ensure that Central Asia isn’t allowed to spiral out of control. And while New Delhi has engaged Uzbekistan, the most populous Central Asian nation. a lot more needs to be done.

India’s Central Asia strategy has been to ally with its friend, Russia and keep China’s ambitions to dominate the region at bay. The future will hold new challenges with Ankara too trying to jump into the region and therefore New Delhi must leave no stone unturned to wrest Central Asia of bullies like Turkey and even China.