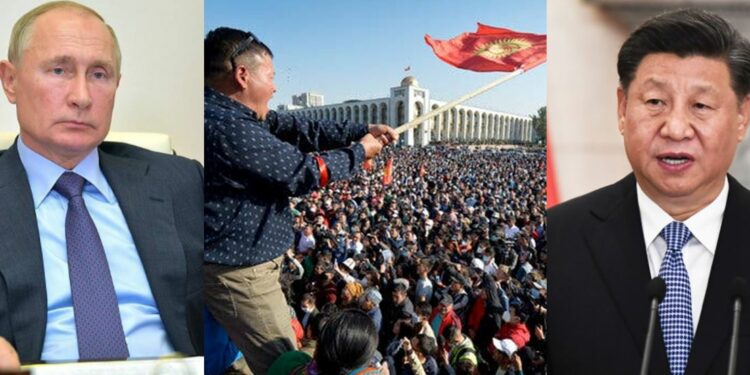 A great Sino-Russian power struggle in Central Asia has just started, as Russian President Vladimir Putin is making a clear attempt to snatch Kyrgyzstan back from China’s tentacles. The cause of sudden friction emerging between the two Asian giants is a political turmoil that has erupted in Kyrgyzstan. Earlier this month, Kyrgyzstan went to polls. The results showed that pro-government parties had won a super majority of seats in the Parliament, but, the opposition has refused to accept the poll results.

The Parliamentary poll disputes have led to demonstrations against the President of Kyrgyzstan Sooronbay Jeenbekov, who has, in turn, tried to strengthen his hold on power. Taking a keen interest in the situation, Russia has said that it was obliged by a security treaty to prevent a total breakdown of government in the post-Soviet Republic. Meanwhile, Beijing has urged Kyrgyzstan to resolve the ongoing election turmoil, while expressing its opposition to interference by “external forces” in Kyrgyzstan.

So, Russia wants to end the ongoing political chaos in Kyrgyzstan, but China wants to keep the Kremlin at bay. Kremlin spokesman Dmitry Peskov told a briefing while referring to Moscow’s obligations under a security treaty with Kyrgyzstan to prevent a total breakdown of government that “The situation looks like a mess and chaos”. On the other hand, Chinese Foreign Ministry spokeswoman Hua Chunying said that China resolutely opposed “external forces’ interference in Kyrgyzstan’s internal affairs”.

Kyrgyzstan is thus shaping up the antagonism in Sino-Russian relations into a bitter power struggle. The stakes are very high for both Putin and his Chinese counterpart, Xi Jinping.

Also, Beijing would be somewhat worried about losing influence in Bishkek’s political circles because Kyrgyzstan shares a boundary of more than 1,000 kilometres with China-occupied Xinjiang. There is simmering discontent within Kyrgyzstan over Chinese concentration camps in Xinjiang that are tormenting not only Uyghur Muslims, but also 200,000 Kyrgyz who live in Xinjiang.

James Dorsey, a senior fellow at the S Rajaratnam School of International Studies in Singapore has been quoted by SCMP as saying, “Kyrgyzstan, along with Kazakhstan, is home to the largest anti-Chinese sentiment in Central Asia.”

Till now, China has been able to buy the silence of Kyrgyzstan’s government by becoming its biggest investor and largest trading partner. In fact, Kyrgyzstan owes a bulk of its foreign debt to China. However, if Russian President Putin can resolve the ongoing political chaos in Kyrgyzstan, then Moscow will be able to exercise a lot more influence over whichever regime stays in power in Bishkek.

Hence, if Russia manages to play peacemaker in Kyrgyzstan’s ongoing political crisis, then it will be able to jeopardise China’s position in the Bishkek. And this is something that Jinping simply cannot afford. If and when, the Kyrgyzstan government starts speaking up about Chinese human rights violations in the Xinjiang region, Beijing would find it hard to avoid any internationalisation of the Uyghur Muslims issue.

And then, the economic costs too will be significant if China loses favour with Bishkek. According to Chinese government statistics, the Sino-Kyrgyz bilateral trade stood at US$6.35 billion in 2019. Beijing wouldn’t want to lose this economic leverage with a sensitive neighbour.

On the other hand, managing the political crisis in Kyrgyzstan is the easiest way for Russia to make a comeback in Central Asia, where Beijing has overtaken Moscow in terms of trade and investments. If Putin can help out Kyrgyzstan during its political crisis, then it will certainly set a domino effect in the region. Russia can thus kick China out of other Central Asian countries like Kazakhstan and Tajikistan where popular sentiment is building up against Chinese expansionism and human rights violations in Xinjiang.

Kyrgyzstan is thus putting China and Russia on a sure-shot collision course. The Sino-Russian strategic “axis of convenience” that aims to reduce competition in areas of conflict and encourage cooperation in areas of mutual interest is, therefore, bound to become redundant. Kyrgyzstan is bringing the most contentious Russia-China conflict, that is, influence in Central Asia to the surface. And now, Putin and Jinping might be heading towards an imminent face-off in Kyrgyzstan.