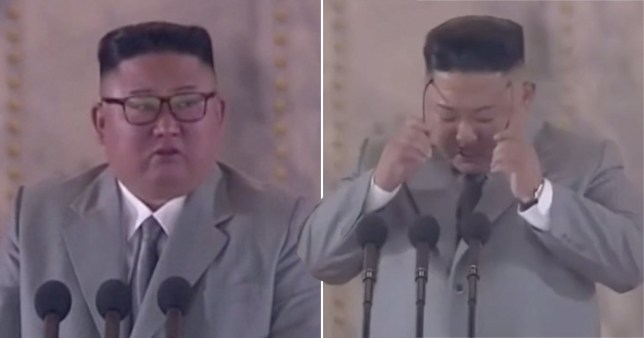 The year 2020 always has more surprises in store. At the exact moment when one would think what more can there be, the North Koreans release a video of a teary-eyed Kim Jong-un while addressing his countrymen. Although it was already visible that China is losing clout with Kim Jong-Un issuing a rare apology only last month, the latest news has proven what could have only been speculated.

While addressing his countrymen, tears rolled out of Kim’s eyes as he thanked the troops for their sacrifices and apologised to citizens for failing to improve their lives. He stated, “My efforts and sincerity have not been sufficient enough to rid our people of the difficulties in their life,” he said. “Our people, however, have always believed and absolutely trusted me, and supported my choice and determination, whatever it is.”

However, in the video, the teary-eyed Kim Jong-un was shown together with a military parade having its new ICBMs in full public display.  The whole event was edited by the North Korean state media and released for the world to see. This can only mean that it was broadcasted to give a message to the world. The apparent signalling of this parade was two-fold.

On the one hand, a teary-eyed Kim marks a shift away from his portrayal as a tyrant and masculine-authoritarian leader to a considerate, reasonable and gentle leader, simply a benevolent despot. It means that North Korea is a reasonable country open for bilateral and multilateral relations within Indo-Pacific as well as with the Western powers.

And on the other hand, it unveiled a  new North Korean Inter Continental Ballistic Missiles (ICBMs) and showcased multiple launch rocket systems (MLRS), as well as fast & manoeuvrable short-range missiles. All of this was so that the world could observe the military capability of North Korea. Meaning that the benevolence and caring attitude of their supreme leader should not be misunderstood to be their weakness.

Making it clear that North Korea is fully equipped to defend itself when push comes to shove and its sovereignty is under threat. It showed that these Weapons of Mass Destruction (WMD) are only for defence and deterrence purpose. Signalling to the Trump administration, a possibility of a peace deal if enough effort is made.

He also reached out to his southern brothers and arch enemies, wishing that North & South Korea would “hold hands” after the pandemic is over. All these statements are unprecedented, given his track record and tales of his brutalities.

However, the current situation that North Korea is going through is unprecedented too. A combined impact of anti-COVID measures, sanctions, and severe summer floods and typhoons have destroyed any semblance of the economy and North Korea is hanging on tender threads. A UN report said that more than 40% of the population faces food shortages which are sure to be worsened courtesy before-mentioned reasons.

Given the global geopolitical environment, being overly dependent on Communist China is not the brightest idea. When we observe this incident together with the recent actions of North Korean supreme leader, all makes total sense. Kim Jong-un has earlier apologized for the shooting of a South Korean soldier, which no analyst could ever have predicted.

Read more: Kim Jong-un issues a rare apology. Is North Korea is warming up to West and allies as China gets weaker?

Kim Jong Un is in good health. Never underestimate him!

A rare health update from the President of USA also shows that both the leaders have maintained contact all these years. It was an important point to show that, the road to peace with North Korea no longer goes only from China.

Thus, by signalling an intent of normalization of relationship, North Korea wants to keep its options open and by doing so try to sail through these uncharted waters of pandemic & post-pandemic world. The new dynamics of Indo-Pacific mathematically stand against China and the North Korean actions signal towards a Sino-North Korean decoupling.

The future may be witness to a US-led peace deal with North Korea. If Trump can make the Abraham Accord a reality, we can be certain that North Korean Peace Deal can happen any day.