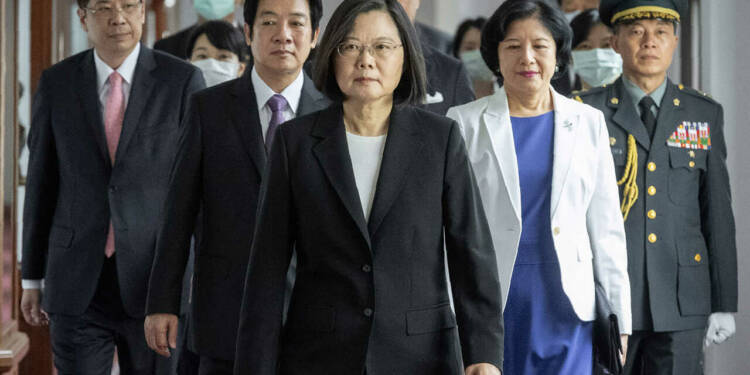 In this photo released by the Taiwan Presidential Office, Taiwanese President Tsai Ing-wen, center, walks ahead of Vice-President Lai Ching-te, left of her, as they attend an inauguration ceremony in Taipei, Taiwan, Wednesday, May 20, 2020. Tsai was inaugurated for a second term amid increasing pressure from China on the self-governing island democracy it claims as its own territory. (Taiwan Presidential Office via AP)

China has given to the world a much-needed example and a learning experience. Even if you are powerful and capable enough, one should never try to take on multiple nations, that is, open multiple fronts simultaneously. China is now in an uncomfortable situation; it was not able to close any of the fronts with its sudden aggressive posturing and now it is facing a more resolute opposition from these respective countries, be it, India, Taiwan, Japan, the Philippines, Indonesia, Vietnam, or Brunei among others.

Add to that, the implicit cold war between China and the USA is making any risky misadventures non-feasible. Thus, China with its increased aggressive manoeuvring inside the Taiwanese territories may seem to portray as if it can attack Taiwan anytime, but the possibility is very low.

The disastrous Himalayan military escalation has brought unprecedented humiliation to the Chinese PLA, plummeting its brand value. And given the amount of global support and appreciation Taiwan has earned, it would be nothing but suicide to launch an offensive against it.

Read more: After losing face in Ladakh, China is desperate to look strong in Taiwan and it’s using Hollywood visuals to prove it

Taiwan is a democracy, which is setting an example in these hopeless times of the pandemic. Tackling the COVID-19 pandemic about perfectly and sending masks & PPE kits as part of humanitarian aid to many countries has resulted in Taiwan gaining a lot of goodwill, respect and recognition.

The Chinese analysts earlier used to say that the differential of interest between the USA and China is highly inclined in China’s favour regarding Taiwan. However, since the democratisation of Taiwan and the maturing of the democratic society in 1995-96, the differential of interests has decreased manifolds. Add to it the current recognition Taiwan is gaining, and the demand to relook at the one-China policy in the USA. Taiwan is carving out a place for itself in the post-pandemic world and that too very successfully.

All this growth in social capital and brand value is backed by its ever-improving military capability. The pandemic has showcased the ability of Taipei to correctly judge the actions and intent of Beijing, which remains highly unpredictable for the rest of the world. Taiwan’s geographic location provides it with an advantage, add to it the 620 million USD worth Patriot Surface-to-Air’s latest model PAC-3 with a maximum interception range of 70 kilometres and altitude of over 24 kilometres. The search range of its radar is 100 kilometres, and it can track 100 targets at the same time.

Read more: ‘We can destroy Taiwan’s military,’ China goes bonkers as the US gives $620 million missile package to Taiwan

Taiwan has recognized multiple fronts of confrontation in addition to the possibility of a direct armed conflict. Be it psychological warfare, cognitive warfare, digital warfare as well as seize tactics with modern characteristics. All these are being considered and the military modernization project is being undertaken directly under the leadership of President Tsai Ing-wen.

The conditions are not at all feasible for China to start their final civil war conquest of Taiwan. However, even if China thinks that they can wait for the right time before making any move, then Taiwan will be much stronger and would hold much more sway in world affairs, making it harder for China to launch any successful attempts at reunification.

Any escalation from the Chinese side in the Taiwan straits will surely result in counter-attacks and offensive posturing by countries with which Beijing is locked on other fronts. Thus, China is in a situation where it cannot afford to take over Taiwan without any substantial losses. And these are only going to increase with the coming years.

Read more: ‘Nothing to do with China,’ Taiwan used to respect the One China policy, but now it is all set to dump it

The pro-independence President of Taiwan has won her second term, signalling that Taiwanese people are no longer interested in any form of united China. All this has been further solidified by Chinese handling of Hong Kong and Tibet. The recent formalization of relations between Somaliland and Taiwan is a small signal of big things to come. The probability of Taiwan’s acceptance in the United Nations is increasing and may become a reality as soon as the restructuring of UN general and Security Council, in particular, takes shape.

The possibility of an Independent Taiwan is highly likely one way or another. Nowhere in the near future, China will find a geopolitical atmosphere where they can take over Taiwan. And as the QUAD is formalizing, any misadventure will be dealt with strongly and will have counterproductive results for Beijing. Thus, as Xi Jinping’s China is cornered, the much-awaited rise of Taiwan as a geopolitical powerhouse can be considered a possibility.