As Russia starts preparing a nice burial for Huawei, it is safe to assume the Chinese telecom giant is dying 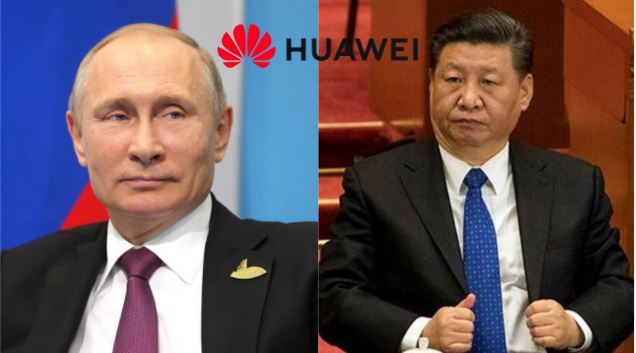 China’s tech giant Huawei is in troubled waters across the world and it is facing ban from one country after another. Now China has pinned its last hopes on Russia for saving Huawei’s fortunes. However, all is not well in Russia either.

Chinese Communist Party mouthpiece, Global Times, will have you believe that all is rosy with Huawei’s entry into Russian territory. In one of its articles, it even quotes the Russian embassy in China that “Russia will co-operate with Huawei”. If only China understood the subtle nuances of conservative diplomacy, it would understand that these assurances are put out to simply keep China ticking to the Russian tune for the time being.

A major component of the 5G technology is to use the 3.4-3.8 GHz frequencies for which the Russian military and the Russian space agency are unwilling to give away. In 2015 Russia along with the US abstained from using the said frequencies for commercial usages and there’s no reason to advocate that Russia would not do it again.

In another major blow to CCP’s Huawei, the Russian Ministry of Digital Development Communications and Mass Media offered to develop 5G within the 4.8-4.9 GHz frequency but imported foreign equipment cannot be applied in the given frequency. Theoretically, the major equipment manufacturers such as Huawei, Nokia, and Ericsson could still make tailor-made devices but the costs attributed to their development would negate any profitability.

Huawei faces another major hurdle in regards to the 5G landscape in Russia. The Russian government has decided to participate in the consortium for the implementation of 5G as a shareholder giving it very significant leverage in the emerging market.

Russia understands that it needs foreign technology for the development of its own 5G and amid strained relations with the west and the political intimacy that Russia and China share, it makes Huawei an obvious partner in their implementation of 5G. In August, Foreign Minister, Sergei Lavrov made it clear that unlike the West, Russia would not shut its door to Huawei but he also added that Russia will actively interact with other countries to jointly create modern technologies. Thus, leaving Huawei hanging by a thread.

The 5G technology will play an important role, in the military as well as in improving the digital well-being of Russia, and thus it would not be a surprise if Russia did opt to develop its own 5G capabilities, it even has a roadmap ready to roll out 5G in 2022.

Russian exports to China had declined sharply pre-2014, only for the US labelling Russia as an adversary in 2014 under its Countering America’s Adversaries Through Sanctions Act (CAATSA). Russia, backed into a corner, was forced to sell its military equipment and crude oil to China, it did so because it had no other options, not because of its own willingness.

Russia significantly exported the S-400 anti-aircraft systems and 24 of its SU-35 fighter aircraft. In return, China stole the technology and mass-produced its own defense line of fighter aircraft and anti-aircraft systems. This was not the first time, China and Intellectual property theft have become synonyms and therefore to let such a state enter into a communications market on one of the world’s biggest and most influential powers suddenly does not seem like a very good idea.

Bilateral relations have been marred with petty disagreements such as the oil exploration in the South China Sea and Chinese nationalistic concerns over territories in the Russian Far East.

Amid the pandemic, global supply lines have significantly eroded, and thus, to use imported tech for use in a nationwide communication channel and which also will be a part of the National Defence agenda does not seem to be a pretty good idea not even in a perfect reality.

China’s Huawei was banned from the US and other major western powers such as the UK, France, and Germany on grounds of breaches in cybersecurity and vulnerability in addition to China’s knack for surveillance. Russia understands these tangible concerns and being a major power in the Middle East and Central Asia, home of Xi Jinping’s flagship BRI, it will not let China enter with its toys in hands.

Russian military concerns far outweigh the cost to develop an indigenous 5G technology, in addition to that Russia knows the snivelling intentions of the paper dragon and thus access to such sensitive military frequencies would not end with favourable results for Russia.

Huawei knows that it is holding onto its last straw in regards to entry into a major market. Forced to run from the US and its western European allies, and India’s own policy to ban goods and services from China, Huawei knows it too well that Russia is its only option to enter a significant market. From the looks of it, it seems Huawei is not faring well in Russian waters which can be realized by the aggressive propaganda campaign led by the Global Times.

In what would be a reciprocal move on Russia’s part would be to buy the technology from Huawei and then mass produce it themselves, This would be what people refer to as a “tit for tat” move.

For all the goodwill between the two countries Russia has amped up forces near the Chinese border in the far east and if all bodes well, it’s goodbye, Huawei.