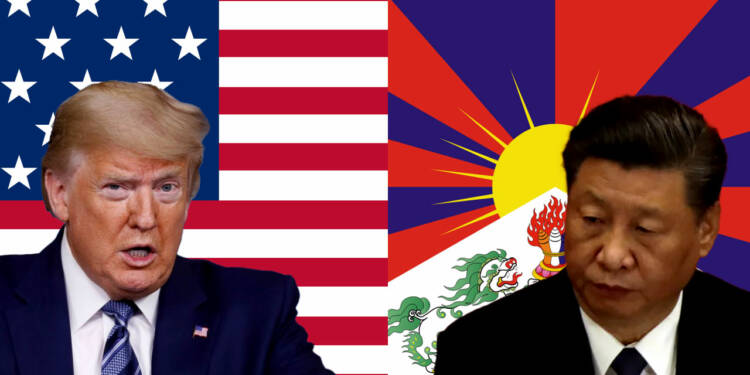 The People’s Republic of China must get ready to lose Tibet. The Trump administration is now making the most active form of intervention against the Chinese occupation of the ancient Buddhist Kingdom. The United States has appointed a senior US human rights official as Special Coordinator for Tibetan issues.

The US Secretary of State Mike Pompeo announced that Robert Destro, Assistant Secretary of State for Democracy, Human Rights and Labour, would assume the aforesaid post which was lying vacant since 2017. Pompeo said that Destro “will lead U.S. efforts to promote dialogue between the People’s Republic of China and the Dalai Lama or his representatives; protect the unique religious, cultural, and linguistic identity of Tibetans; and press for their human rights to be respected.”

Pompeo also said, “The United States remains concerned with the PRC’s repression of the Tibetan community.” Destro’s appointment as the Special Coordinator for Tibetan issues has, of course, come as a bolt from the blue for Beijing, which has reacted angrily. But the newly appointed US Special Coordinator for Tibetan issues has gone ahead with his role of advocating Tibetan rights.

In fact, the latest appointment seems to be a part of Washington’s strategy to legitimise the Tibetan Government-in-Exile (TGiE), which is based in India. In fact, the United States has, for the first time, hosted the head of TGiE at the State Department in Washington DC.

And interestingly, Lobsang Sangay, the ‘Sikyong’ or the President of the TGiE was hosted by Robert A Destro, US Special Coordinator for Tibetan issues. Sangay who has been the TGiE President since 2011 said, “Today’s unprecedented meeting further strengthens the narrative that the Central Tibetan Administration will be treated akin to other governments by the US State Department, and it is yet another significant win for Tibetans and allies.”

Therefore, the greater role that the US carving out for TGiE, the rightful authority to govern China-occupied Tibet, sends warning bells ringing for the paper Dragon. And therefore, China has itself suffered a massive meltdown over the appointment of Special Coordinator for Tibetan issues by the United States.

The Trump administration has been pushing the Tibet agenda for the past few months, in the background of spiralling Sino-American tensions. Earlier this year, the US directly provided funds to the Tibetan Government-in-Exile based in India for the first time. The US Agency for International Development or the USAID committed nearly $ 1 million to the Social and Resources Development Fund (SARD Fund), a non-profit organisation set up by the India-based TGiE itself.

Kaydor Aukatsang, Director, SARD Fund had then told Deccan Herald, “This funding signifies the US government’s support to the Central Tibetan Administration and the Tibetan community.”

The US also imposed visa sanctions on several Chinese officials who were believed to be restricting foreigners’ access to Tibet. The US Secretary of State had then reiterated Washington’s commitment towards “supporting meaningful autonomy for Tibetans, respect for their fundamental and inalienable human rights, and the preservation of their unique religious, cultural, and linguistic identity.”

However, nothing matches the appointment of a Special Coordinator for Tibetan issues. The appointment really shows Washington’s intent to compel the People’s Republic of China to recognise the Dalai Lama’s inalienable role in Tibet, even though Beijing detests the Buddhist leader.

The US understands that China has no real sovereignty over Tibet. China had seized Tibet in 1950 on the bizarre pretext of Tibet’s “peaceful liberation” to throw the Himalayan region off its “feudalist” past. But now the United States is committing itself to give Tibet real “liberation” from its present reality of Chinese occupation.

Moreover, now is the best time for Trump administration to free Tibet from the paper Dragon’s clutches. The fact remains that India, which is engaged in a major military standoff with the Chinese PLA at the Line of Actual Control, that is, de facto India-Tibet border, has shown the intent to advance the Tibetan cause. On the other hand, Xi Jinping administration is panicking and has opened mass Tibetan labour camps which bear resemblance to the Chinese coercive labour program in Xinjiang.

At the same time, the Xi Jinping administration is trying to kill the Tibetan Buddhist religion. Che Dhala, Chairman of the Tibet Autonomous Region, for instance, said that people of Tibet should not “overdo” religion and follow the country’s ruling Party (CCP) for a “happy life”. China is, therefore, telling Tibetans that they cannot enjoy a “happy life” if they don’t keep the ‘Party’ above religion.

Therefore, China has started killing Tibetan Buddhism and now the Trump administration cannot delay active intervention in the Himalayan region if it has to be saved from the paper Dragon. The appointment of Special Coordinator for Tibetan issues reflects that the US is ready to take the China challenge in Tibet’s head-on.

‘You meddle in my internal affairs, we will meddle in yours,’ India’s message to China is loud and clear