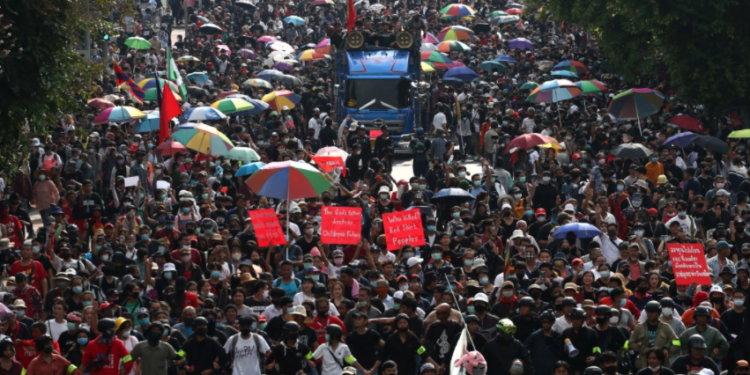 Thailand seems to be on the brink of a great transformation. On Friday, thousands of pro-democracy protestors hit the streets of Bangkok and clashed with the police. The protest which first started in July, saw a messy turn of events as the law enforcement authorities conducted a brutal crackdown and heavy-handed dispersal of the crowd yesterday.

The official statement of People’s movement read that they condemn any violence against the people and the protests continued today as well. The movement is garnering support and picking up steam as the streets of Bangkok are getting filled with protestors. Twitter is filled with pictures of bystanders and people raising their hand with the three-finger salute synonymous with the protests, showcasing their solidarity for the pro-democracy movement.

Thailand, dunno what to say… but please stay safe n hope you’ll find a way out as soon as possible. One of the most kind and humble countries I love. 🙏🏻🙏🏻🇹🇭 https://t.co/mSEh4BF4qN

The government had earlier agreed to tolerate the protests in a condition if they remain peaceful. However, things changed suddenly as the crowd was blamed for obstructing Queen Suthida’s motorcade. The question remains, why did the authorities allow the passage of her motorcade from the area where protests were going on?

These protests are long in the making, but the recent ignition was provided last year after the courts banned the most vocal party opposing the government of Prayuth Chan-ocha. The protests were picking up pace last year, however, due to the COVID-19 crisis and efforts to stop the spread of the virus, these protests stopped.

These protests resumed in mid-July as the lockdown norms eased, with the demands for the removal of Prayuth, a new constitution and an end to the harassment of the activists. Some over-zealous protestors went ahead with a list of 10 demands – including the demands to reform the Monarchy.

Apart from the last demand which seeks to reform the Monarchy, other demands showcase a large deal of consensus among Thai citizens. The conservatives on the other hand are horrified by the thought of reforming the Monarchy, which as per the constitution is “enthroned in a revered position of worship”.

The current King Vajiralongkorn has had many controversies surrounding him. And the protests seek to reverse the 2017 increase in the King’s constitutional powers, only a year after his succession to the throne. He also took personal control over the palace fortunes which shattered his image right from the get-go.

As per many reports and claims, he has not been able to fill his father’s shoes, who was revered throughout Thailand. The protestors are claiming that the current King is reversing the legacy of his father, and taking the country back to the pre-1932 absolute monarchy.

The protests have been long brimming as the Palace has been long colluding with the military to compromise elections and keep the de-facto power in its hands, with a de-jure power in the hands of the government and judiciary. Combine this with the distrust of Thai people on their current monarch, the situation turns out to be grave.

The protestors include students and young leaders and a confluence of organizations like Free Youth Movement, United Front of Thammasat and Demonstration, and some smaller groups. They have found support from the fellow Hong Kong pro-democracy groups and even garnered traction from the K-POP celebrities.

The Milk-tea alliance seems to be in full swing with the protests getting online support from Hong Kong and Taiwan. The more the Thai dispensation is moving towards authoritarianism, it is finding China to be a fruitful ally, moving away from century-old friendship with the west towards balancing the USA with China. However, the pro-democracy movement is a testimony to Thai people’s long tryst with true democracy. It has discredited any attempts from China to make Thailand its next Mekong colony.

Read more: In Thailand, the youth are pushing against a pro-China government with all their might to preserve democracy

Thailand literally means ‘Land of free’. And here one cannot stop the attempts from the young blood from seeking freedom and fresh air of true democracy. The situation seems to be escalating and the movement is bound to grow. The increasing support from the fellow milk-tea allies will provide the necessary boost in morale. And going ahead the government will be forced to accept some demands and reach a compromise.