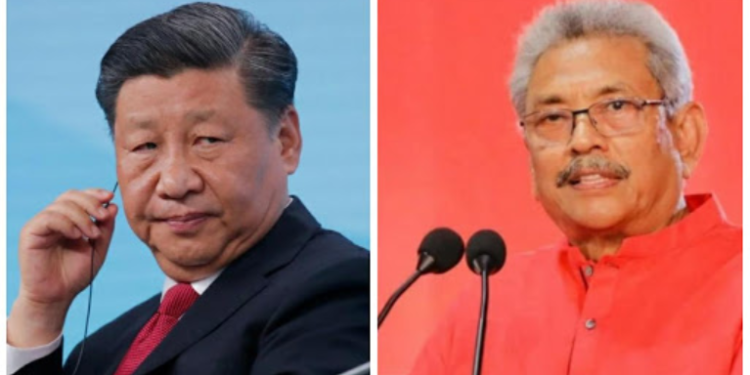 Battered in the African continent, hanging by a thread in Central Asia, being strategically cornered by its most important ally Russia, and rattled by the growing influence of Quad, China turned its eyes on Sri Lanka again to gain another foothold in the island nation after the Hambantota project, but, this time it seems China won’t get its way.

In international politics, it has started to look more and more like China does, China fails. This will be seen as another breakthrough of the current Indian administration and one of many roadblocks that China has had to face in its strategy to surround India in its background, as the Maldives became another state to turn China down for its sinister plan.

Just days after the top diplomats of the QUAD members met in Tokyo to increase their involvement in a regional initiative called “Free and Open Indo-Pacific” to counter China’s growing assertiveness, CCP in response rounded up its diplomats and hurriedly sent them down to Sri Lanka, led by the former foreign minister Yang Jiechi. Though their welcome was not exactly met with furore.

Having already admitted that Hambantota was a mistake, The Sri Lankan foreign secretary Jayanath Colombage had stated “President (Gotabaya Rajapaksa) has stated that in terms of strategic security, we will follow an ‘India first’ policy. We cannot afford to be a strategic security threat to India and we don’t have to be. We need to benefit from India. The president has clearly said that you are our priority as far as security is concerned but I have to deal with other players for economic prosperity”.

Recently the Maldives also poured its heart out for India when the Indian government extended ‘half-a-billion Line of Credit’ to help it recover out of China’s unpropitious debt-trap policy.

To add to the misery of the Chinese, the President, Gotabaya Rajapaksa, said that he wanted to disprove the perception that the communist Country was funding development projects in the country to gain “influence in the local affairs”.

His concerns stemmed from the concerns of many other states and geopolitical advisors that these loans were financially unviable, and Sri Lanka could be forced to give more concessions to the Chinese just like in the case of the Hambantota project.

Learning the lessons from their state, Sri Lankan officials might’ve also seen the situation in Djibouti, Kenya, Tajikistan, Madagascar, Pakistan, Montenegro and so. The Debt trap diplomacy is aggressive and feeds into China’s growing expansionist appetite. Beijing has ultimately forced underdeveloped and developing states to borrow from them for infrastructure projects and later control them if they fail to pay.

“Many geopolitical analyses interpret this project as a ‘debt trap’ set up by China to gain control over Sri Lankan affairs. I want to prove that it is not the case and that this large-scale project will help improve the living standards of the people. Assist us in this endeavour”

This is a shot in the foot moment for the Chinese and their debt-trap policy. They cannot deny the loan to grant Sri Lanka $90 million, nor can they now force them to pay it back with territorial concessions.

Jinping’s loan policy is like an albatross around the neck, he just can’t seem to get rid of it. The case with Sri Lanka seems like another bad chapter out of China’s failed incursion in Africa. The African nations, though much poorer had forced the Chinese to sign the DSSI and cancel or suspend loans worth billions of dollars, while at the same time extorting more money from the Chinese to recover from the pandemic caused by the China-virus.

Sri Lanka, just like the African continent is one of the biggest geo strategical locations for China’s Belt and Road initiative without which it could lose control of the trade routes in the Indian ocean. China cannot risk losing another country in the region after the Maldives rightly pushed it away.

Thus, to at least maintain a presence in the region, China would have to give a public assurance to Sri Lanka, which it would much want to avoid because it would have to keep on pumping money into Sri Lanka without any other way to procure it back. More importantly, it’d fail in its primary objective of why it came here in the first place, to gain a foothold in the region and turn India’s neighbours against India.

China fans separatism in India. Bad move. India can press any of its 3 raw nerves any moment