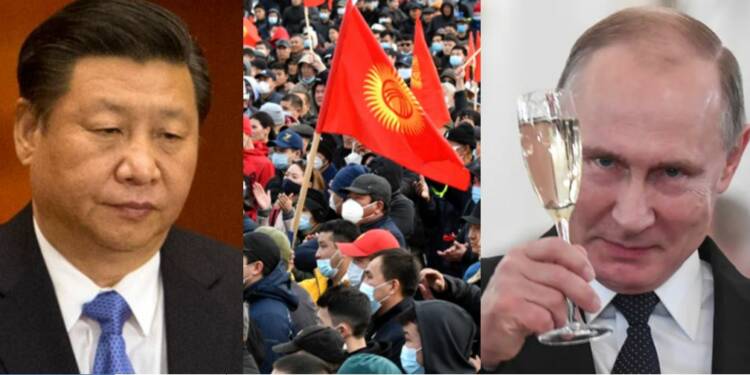 Kyrgyzstan’s political crisis is coming towards an end. And as the crisis ends, it is becoming clear that Russia is the biggest winner, while China stands to lose with its future investment plans in the Central Asian country getting jeopardised. Kyrgyzstan was on the boil ever since two pro-government parties won a supermajority in the country’s Parliament on October 4. The opposition refused to accept the results, leading to a fierce power struggle and post-poll violence.

On Thursday, President Sooronbay Jeenbekov, who has had a tendency to warm up to China, decided to step down. And now a populist ex-lawmaker, Sadyr Japarov, who was freed from jail during the post-poll protests has claimed the roles of both Kyrgyzstan’s President and Prime Minister. Russian President Vladimir Putin, who enjoys unmatched popularity in Kyrgyzstan simply did not help Jeenbekov and in a way allowed the Jeenbekov administration to collapse in the face of public anger. And while Russia holds the power to influence the outcome of a leadership struggle in Kyrgyzstan, China does not, despite its growing investments.

Jeenbekov will go down in history as a leader who oversaw increasing Chinese involvement in his country and also downplayed Chinese human rights violations in Xinjiang. In fact, China went on to become Kyrgyzstan’s biggest investor and largest trading partner. Today, Kyrgyzstan owes a bulk of its foreign debt to China.

Within Kyrgyzstan, there is a lot of anti-Beijing sentiment largely driven by Chinese concentration camps in Xinjiang that are tormenting not only Uyghur Muslims, but also 200,000 Kyrgyz who live in Xinjiang. But Jeenbekov was downplaying such intense anti-China sentiments.

He went as far as saying, “We are working through diplomatic channels. In this matter, we must bear in mind that we are talking about the citizens of China. How can we interfere with the internal affairs of another country?”

But when post-poll violence gripped Kyrgyzstan, Jeenbekov actually started looking at Putin for support. He had even claimed to have multiple phone conversations with the Russian President. Japarov too made it a point not to antagonise Moscow and stressed Russia’s role as a strategic partner for Kyrgyzstan during his ascent to power.

Kyrgyz leaders tend to warm up to the Kremlin in a bid to impress the electorate. According to the Moscow Times, a former Kyrgyz lawmaker Baktybek Beshimov said, “Today, Russia is making efforts to stabilize the situation with the pro-Russian Kyrgyz leaders popular among the people.”

However, during the recent political turmoil, Russia did not back anyone as Putin decided not to pick sides. It does not mean that Russia decided not to play a role. Moscow maintained that it was obliged by a security treaty to prevent a total breakdown of government in the post-Soviet Republic of Kyrgyzstan. But it seems that for the Kremlin, a regime change is not tantamount to a total breakdown of government.

Russia, after all, considers the five post-Soviet Central Asian Republics as its exclusive “sphere of influence”. And presently, China and Russia are competing for influence in Central Asia, as Beijing tries to eat into Russian space with its BRI investments. Therefore, Putin might have chosen not to support a leader like Jeenbekov, who was openly warming up to China and opening up Kyrgyzstan for predatory Chinese investments.

Logistics entrepreneur Abdimital Jumabekov, who had opposed the October 4 Parliamentary poll results in Kyrgyzstan also said, “The president will be whoever gets approval from Putin.” Moscow Times quoted Jumabekov as saying, “He (Putin) has so many levers.”

Therefore, the most probable inference coming out of Kyrgyzstan is that Jeenbekov could not convince Putin. Therefore, the Russian President allowed the Jeenbekov regime to collapse and decided not to pick sides.

According to the analysts interviewed by Moscow Times, any new political regime that comes at the helm of affairs in Kyrgyzstan will be inherently pro-Russia and look up to the Kremlin for dispute resolution.

As for China, it doesn’t know what a new regime will be like. Will it be open to Chinese investments? And more importantly, will a new regime stay silent on the concentration camps run by Chinese authorities in Xinjiang? This is also the reason why China was opposing “external forces’ interference in Kyrgyzstan’s internal affairs”.

China knows that the Russian role in Kyrgyzstan in whatever form possible could lead to a staunchly pro-Russia and anti-China regime coming to power in the key Central Asian nation.