With every passing day, the Chinese PLA is getting buried deeper and deeper in Ladakh snow

No wonder why China is pushing for withdrawal 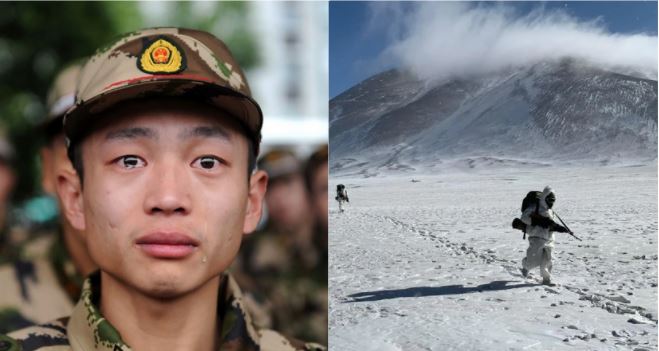 On Monday, a Chinese PLA soldier, identified as Corporal Wang Ya Long was apprehended by the Indian Army after he crossed over to the Indian side. While India has said that the Chinese little emperor will soon be returned, an espionage angle is also said to be under probe. Further, the Indian Army made it clear that the Chinese soldier was administered medical assistance, food and warm clothes to help brave the extreme cold conditions of the region which have only begun setting in. Sources have indicated that the detained Chinese soldier was not in a very good physical condition, owing to the extremely cold weather which has begun to set in.

The freezing Chinese soldier captured by India is not an exception. In fact, he serves as a human insight into the conditions which prevail in the PLA camps, marred with Chinese soldiers freezing and being rushed to nearby military facilities to be kept alive. The Chinese won’t survive along the Line of Actual Control in Ladakh for the next few months, leave alone fight a battle in the region against the well-acclimatised soldiers of India. As a matter of fact, acclimatisation is an alien concept for the Chinese side, which is the primary reason why the PLA soldiers count every breath drawn in Ladakh during the winters as a blessing.

Having been flown in directly from East China or the Mainland, the Chinese wimps which are paraded around as soldiers are not made to gradually cope with the harsh climatic conditions of the region, rather, they are unceremoniously dumped like a herd of sheep into the PLA camps. Consider this as an example: how would you cope if you are suddenly transferred from your hometown, where the average temperature is around 25 degrees centigrade, to a region where the mercury falls to -40 degree centigrade? That’s precisely how Chinese soldiers are dumped in Ladakh and are asked to fight a war against a mighty India without any acclimatisation, which is why the blood in their veins starts running cold soon.

According to reports, large numbers of Chinese PLA troops are being rescued and replaced from the frontline in Eastern Ladakh. TFI has already reported extensively on the fact that in the absence of acclimatisation and required levels of courage, complemented with the fear of the Indian Army, Chinese soldiers were seen being stretchered off to a medical facility from the Pangong Tso area recently. In a bid to alleviate a fraction of its soldiers’ woes, the Chinese side is now planning to spend a sum of 3 billion to procure new tents to be used in Ladakh.

This tells us that the Chinese soldiers are currently being made to serve in inhuman conditions, without proper tentage, which is so desperately needed by them to survive the Himalayan winters. According to reports, China has signed a special tent deal with Guangzhou Plato Plastic Company for 2 billion 94 crore rupees. These tents provide a comfortable place for soldiers to stay at altitudes above 15000 feet. These tents are being prepared for soldier halts, especially in dry and low oxygen areas. The tents are said to have inbuilt arrangements to keep them warm and well ventilated.

In what showed the reality of Chinese soldiers being deployed along the Indo-Tibet border in Ladakh, a video had gone super viral on social media globally which showed a dozen Chinese soldiers hysterically sobbing on their way to the Indian border. In the video, the soldiers were seen crying inconsolably as they struggled to sing the words of the PLA song “Green Flowers in the Army.”

It is already known for a fact that Chinese soldiers lack the capacity to fight any war, leave alone one with India, facing the battle-hardened soldiers of the Indian Army no less. Having been born in a one-child regime, present-day PLA soldiers grew up believing they were ‘little emperors’. This has ended up disastrously hampering the capabilities of the Chinese armed forces.

With the winters only setting in, Chinese soldiers, true to their character, have started getting buried in the deep snow. This is a major reason why China is now pushing for withdrawal from Eastern Ladakh and proposing new terms of de-escalation, which India seems least bothered to entertain. India’s strategy seems to be simple: make Chinese soldiers freeze in the winters of Ladakh, so that their CCP paymasters never dare eye Indian territory ever again.