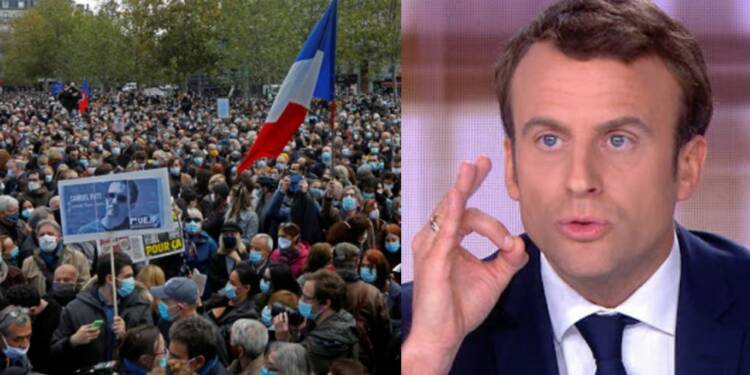 French President Emmanuel Macron is on a roll. France has been on the boil following the beheading of a French teacher, Samuel Paty, after he showed cartoons of Prophet Muhammad during a lesson. France has been witnessing anti-radical Islamist rallies with people carrying the slogan “Je suis enseignant” (I am a teacher). French President himself promised action following the traumatising and brutal murder of Samuel Paty.

France’s anti-Islamic radicalism movement is suddenly in full swing. A number of actions are being taken including the temporary closure of a Mosque in Paris and dozens of raids by French authorities. This is going to have some major repercussions on the entire European Union (EU). Macron is pulling not just France, but also the entire EU away from political correctness and the ill-fated legacy of the ‘open door’ policy for refugee intake.

In fact, amidst a number of measures being taken by French authorities to crack the whip on Islamic radicalisation, Reuters has also reported that as per a police union source, France is preparing to expel 231 foreigners who are on a government watch list over suspicions of extremist religious beliefs. Reuters has further reported that according to the source, Interior Minister Gerald Darmanin has asked his Ministry’s services to examine refugee status requests in France more closely.

Countries like Germany, France and Sweden which had decided to take in as many immigrants as possible have come to suffer over the last four years or so. Terror attacks, street crimes and indecent assaults– Europe has seen it all. Within Europe, there has been an undercurrent of sentiment against such liberal refugee policy without taking into account the grave socio-cultural consequences or radicalisation threats associated with heavy immigration.

Interestingly, Macron who had whole-heartedly praised Angela Merkel’s open-door policy in 2017, has now embarked on a completely different course. Last year itself, the French President had said that France “cannot host everyone(immigrants)”. Speaking to French radio Europe 1 on the sidelines of the United Nations General Assembly summit in New York, Macron had said, “In order to be able to welcome everyone decently, we shouldn’t be too attractive a country.”

Samuel Paty’s gruesome murder however is the tipping point in France when it comes to the policy issue of checking Islamist radicalisation and formulating a sensible refugee intake policy. We are already witnessing signs of Paris bringing a landmark change in its refugee policy.

Macron is taking some real action against radical Islamist elements in France. On Tuesday, the French President said, “We stepped up actions over recent days.” He added, “It’s not about making new statements.” And also assured his countrymen by saying, “we know what we need to do.”

Macron went a step further to announce that the French Cabinet will on Wednesday dissolve a pro-Hamas organisation called Cheikh Yassine. Macron said that this organisation was “directly involved” in the gruesome murder of Samuel Paty.

French psyche is deeply hurt by the beheading of an innocent teacher- one, who stood up for the cause of freedom of speech. Within Paris’ political corridors Samuel Paty’s killing reinvents the Charlie Hebdo or Nice terror attack horrors. The people of France want action not only against those responsible for Paty’s beheading, but also against every organisation or individual fanning hatred or radical ideology. Macron also seems to be obliging his people.

Macron’s anti-Islamist movement is in full swing in France, and this is going to have some major repercussions on the European Union’s pro-immigration policies.