Suga is upping the ante 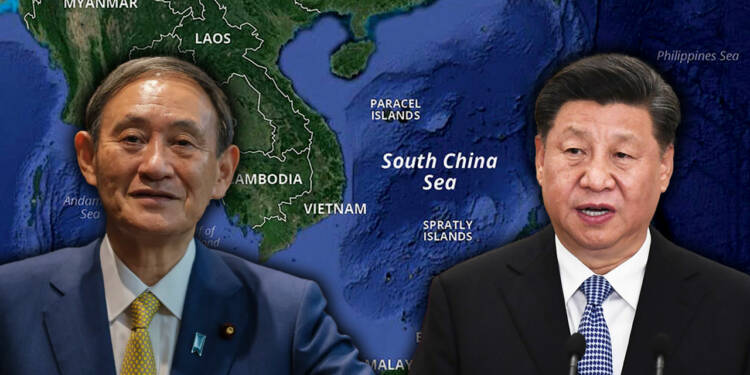 In a huge blow to China, Japan seems to be upping the ante in the hotly-contested waters of the South China Sea. Till now, Japan and China were confronting each other in the East China Sea, given the paper dragon’s provocative moves to send vessels near Japan’s Senkaku Islands. However, now Japanese Prime Minister Yoshihide Suga has decided to strangulate the Middle Kingdom in China’s so-called strategic backyard- the South China Sea.

Speaking in Indonesia’s capital Jakarta during an official visit, Suga made it clear that Tokyo would help Southeast Asian nations augment their maritime security capabilities. Suga’s promise was clearly aimed at China which has been locked in tensions with Southeast Asian nations like Vietnam, Indonesia, the Philippines and Malaysia over South China Sea disputes. Therefore, Suga is setting new rules in the region and making it clear that China can no longer impose its will in the strategic waterways of the South China Sea.

China has built artificial, military islands in the disputed waters. Presently, Beijing claims virtually everything from fishing rights to waterways in almost the entire region. Even though China’s “nine-dash line” theory of enjoying “historical maritime rights” has no recognition in international law, Beijing has been terrorising other stakeholders in the region. But now Japan has joined hands with Southeast Asian nations to hold back China.

Suga even took a veiled jibe at China when he said, “In the Indo-Pacific that connects maritime transport between Japan and ASEAN, we can achieve the peace and prosperity only by fully implementing rule of law that allows anyone freedom and openness.” The Japanese PM added, “Japan opposes to any action that would increase tensions in the South China Sea.”

Suga said, “Achieving a rule-based free and open Indo-Pacific in this region contributes to the peace and prosperity for the entire world.” When Suga spoke in the context of Southeast Asia’s role in a Free and Open Indo-Pacific, he essentially underscored the need to counter China’s growing aggression in the hotly-contested South China Sea.

As for Japan, it is a very natural urge to increase engagement with Southeast Asian nations at a time when Chinese belligerence has reached a new high in both the South China Sea and the East China Sea. From Tokyo’s perspective, ensuring security in the region and maintaining the status quo is critical.

Japan is a maritime nation devoid of natural resources and therefore the strategic waterways passing through the South China Sea are a lifeline for Japan’s highly industrialised economy.

Therefore, till now China was trying to bully Japan in the East China Sea and Southeast Asian nations in the disputed waters. But Suga is changing the rules of the game. He is joining hands with Southeast Asian nations in the South China Sea to strangulate China in the Western Pacific. Chinese President Xi Jinping is therefore going to face some tough time going ahead, as China’s enemies start ganging up on it.