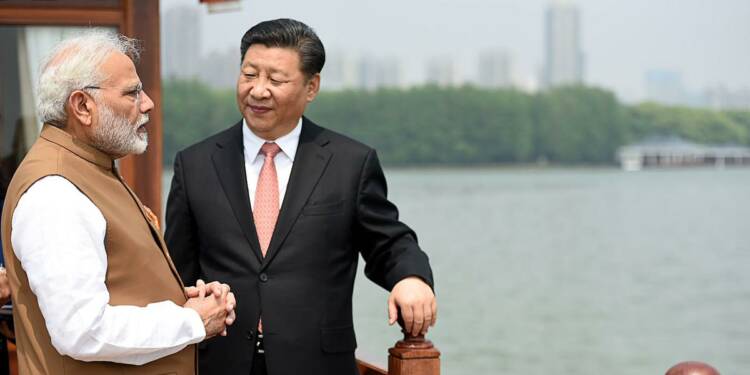 India is giving China a dose of its own medicine. First, India turned the tables on China’s ‘String of Pearls’ strategy to surround India from all sides in the Indian Ocean Region (IOR), by building its own ‘Necklace of Diamonds’ to counter-encircle China. India has worked on strategically-located ports like the Chabahar port in Iran and Sabang port in Indonesia, apart from finalising military logistics sharing pacts with countries like Japan, South Korea, Singapore and Australia.

And now New Delhi is countering an even older Chinese strategy- the Five Fingers of Tibet that considers Tibet to be China’s right-hand palm, and Indian territories of Ladakh, Arunachal Pradesh and Sikkim, along with India’s Himalayan neighbours, Bhutan and Nepal, to be China’s Five Fingers. India has stepped up its ties with China’s land neighbours like Russia, Tajikistan, Kazakhstan, Mongolia, Myanmar and Vietnam.

China’s ‘String of Pearls’ strategy to build infrastructure all around India from Pakistan in the West to the Maldives and Sri Lanka in the South, and Bangladesh and Myanmar in the East failed. In fact, countries like the Maldives, Myanmar, Sri Lanka and Bangladesh saw through China’s debt-trap strategy.

China’s Five Fingers of Tibet strategy too is a failure because Ladakh, Arunachal Pradesh and Sikkim will always remain India’s integral territories, while Bhutan and Nepal remain Indian allies despite Chinese intervention. Kathmandu too has realised the perils of interacting with an expansionist-belligerent China.

In line with New Delhi’s strategy to neutralise the Mao Zedong-era Five Fingers of Tibet Policy, India has made an attempt to bolster its defence ties with the biggest Central Asian Republic of Kazakhstan. Eurasian Times has quoted an Indian Defence Ministry official as saying, “Indian companies are in talks with Kazakhstan defence industries for co-production and co-development in defence production.”

India’s attempt to develop closer defence relations with Kazakhstan is a significant move in the right direction. Kazakhstan shares a 1,782.75 kilometre-long border with the People’s Republic of China. Moreover, Kazakhstan is rife with anti-China sentiment over Chinese concentration camps in Xinjiang that are cracking down on not only Uyghur Muslims, but also 1.5 million Kazakhs.

China has managed to foster close economic and trade ties with Kazakhstan like the rest of the five Central Asian Republics that were once a part of the erstwhile USSR. But the Kazakh government would want to balance out its relations with Beijing by warming upto India in terms of military ties.

But then Kazakhstan is not the only Chinese neighbour on New Delhi’s radar. Recently, India’s Defence Minister Rajnath Singh met his counterparts from Uzbekistan, Kazakhstan and Tajikistan on a visit to Moscow to attend the crucial Shanghai Cooperation Organisation (SCO) Defence Ministers meeting.

Singh had then tweeted, “Had an extremely fruitful meeting with Defence Minister of Tajikistan, Colonel-General Sherali Mirzo in Moscow. Our talks included a wide spectrum of India-Tajikistan defence relations.” This was again crucial as Tajikistan and China have not been sharing a very cordial border situation over the recent past. Jingoist elements in China claim that Tajikistan’s Pamir region is a part of the Chinese territory.

According to a Joint Statement by India and Mongolia last year, the two sides have been satisfied with cooperation in areas of “national security, defence and border protection.” India’s cooperation with Mongolia has far-reaching implications given the growing distress against Chinese occupation in Inner Mongolia.

Further, India is also enhancing cooperation with China’s Northern and Eastern neighbours like South Korea, Japan, Russia and Taiwan. New Delhi is therefore successfully surrounding China from all its sides, starting straight from Central Asian Republics like Kazakhstan and Tajikistan towards China’s West to Russia and Mongolia in China’s North, and South Korea and Japan in China’s Northeast.

China’s perception of a two and a half front war in India’s North by claiming Indian territory, along with Nepal and Pakistan, has flopped. But India’s maritime and territorial encirclement of China seems to be moving in the right direction. Beijing wanted to encircle India, but New Delhi has got the Middle Kingdom trapped in both land and sea.