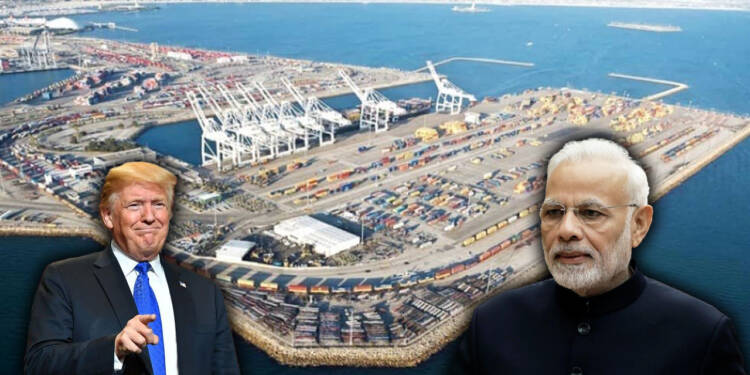 The India-US relations are touching new heights. And ahead of the US-India 2+2 ministerial meeting, the Trump administration has informed their Indian counterparts that the US sanctions on 18 major Iranian banks will not impact the Indian project of the development of Chabahar port in Iran.

As per the Sunday Express, this message regarding the development of Chabahar port was communicated to the Indian government through diplomatic channels on 12th October. It can be very well connected to the India-US signing BECA agreement and New Delhi’s attempt to get the best deal out of Washington for going ahead with the deal.

This can be seen as a big diplomatic victory for India as the Trump administration has been taking stringent action against Iran and if they make any concession with any country regarding Iran, then the country enjoys very good relations with the USA. The US Treasury department’s sanction on Iran’s 18 major banks had a wind-down period of 45 days starting October 8th, which meant that all non-Americans would have to wind-down activities and transactions with the Iranian financial institutions and sectors.

Given the increasing geostrategic alignment between New Delhi and Washington, the USA can benefit if India has a port which can bypass Pakistan for reaching to Afghanistan. This becomes all the more important as the USA is trying to broker peace between the Afghanistan government and the Taliban. The USA is trying to move out of Afghanistan, which will more likely make the situation worse, and in such situation, the USA cannot rely upon Pakistan.

India on the other hand finds the port of high importance as, one, it is the first major investment by India in another country for developing something of Indian strategic importance. And two, it provides India with a much-needed node to connect with Afghanistan and the whole of Central Asia bypassing Pakistan.

The Americans are now very clear about the position of Pakistan, and as it further slips into the Chinese sphere of influence, becoming a failed state, the USA does not want to be dependent on Pakistan for connectivity with Afghanistan. Thus, India’s Chabahar port project provides a possible mode of entry in Afghanistan for the USA as well as it makes India capable of entring Afghanistan if and when situations get worse and need Indian intervention.

India is developing the Chabahar port and the Chabahar-Zahedan Railway Project connecting the port with Afghanistan, thus providing a route for connectivity with Kabul bypassing Pakistan. It was agreed on as part of a Trilateral agreement among India, Iran and Afghanistan to develop International Transport and Transit Corridor. The port can also be of utility for transporting natural gas from Central Asia without getting bothered by Islamabad.

Thus, by making it clear that Iran sanctions won’t impact the Indian projects and interests at Chabahar port, the USA has given in to the Indian ambitions in Chabahar. It showcases the importance of India for the USA in Asia. Many analysts have earlier said that a strong India is good for the USA. The US by considering Indian interests has showcased how far New Delhi and Washington have come in their bilateral relations.