The countries are tired of China's fishing militia 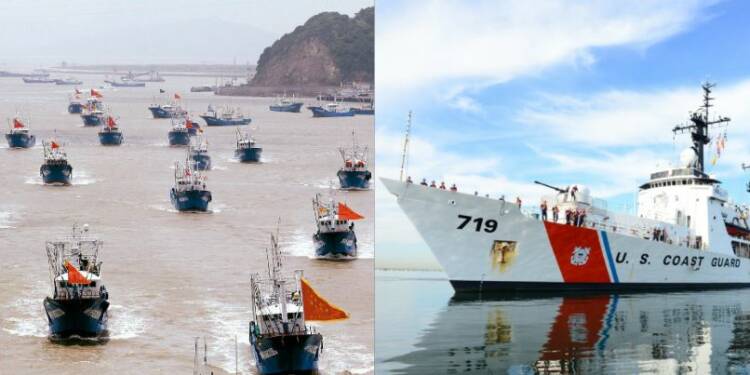 The United States is opening yet another front against the People’s Republic of China, and this time the US Coast Guard is coming to take on China’s fishing mafia. With this, the US plans to take on the Chinese maritime militia masquerading as innocuous fishing fleets and to also check Beijing’s exploitative fishing ambitions in the region.

White House National Security Advisor Robert O’Brien has himself announced that the US Coast Guard (USCG) will deploy its new Fast Response Cutters in the Western Pacific region in order to confront the Chinese fishing fleets who indulge in allegedly predatory activities. The US is now looking to ensure freedom of navigation by interdicting such Chinese fishing fleets.

As reported by TFI earlier, the Chinese Communist Party (CCP) has been using so-called fishing boats to push its maritime militia into the seas to capture territories.

The CCP has been using its maritime militia in order to harass fishermen of other countries all across the Western Pacific region, including the hotly contested South China Sea. Other countries like the Philippines and Vietnam, Brunei, Malaysia on South China Sea have regularly raised alarms about large swathes of Chinese boating fishes encroaching their sovereign waters.

However, one shouldn’t mistake such large swaths of fishing boats as ordinary fishing fleets. In fact, more often than not, most of such Chinese fishing boats are part of the Chinese maritime militia, properly trained and educated to ward off potentially armed hostilities and to also exert dominance in the region by scaring off the fishermen, stealing their fish and claiming authority over the sovereign boundaries of other nations.

In fact, the maritime militia of China is a paramilitary force trained by the Chinese navy to engage in patrol, surveillance, resupply, and other missions to bolster China’s presence in contested waters.

Chinese bullying in the South China Sea has even compelled the Philippine Navy to consider sending over 200 militiamen to the West Philippine Sea to execute patrols and protect fishermen who have long been harassed by encroaching Chinese forces.

Apart from the sovereignty issue that Chinese fishing mafia creates, Beijing is also the most significant culprit when it comes to overfishing and depleting the maritime resource.

Recently, the Overseas Development Institute (ODI), a London-based think tank reported, “Chinese DWF is not solely responsible for the global fisheries crisis: other countries are also responsible for overfishing. The international community has also failed to ensure oversight of international fishing operations …”But it added, “the sheer size and global presence of its DWF fleet, as revealed in this report, means China is the most significant actor.”

China has already over-exploited its own fishing resources, and therefore the Communist country often ends up terrorising its maritime neighbours in the Pacific region over fishing interests.

The White House statement too notes, “The People’s Republic of China’s illegal, unreported and unregulated fishing, and harassment of vessels operating in the exclusive economic zones of other countries in the Indo-Pacific, threatens our sovereignty, as well as the sovereignty of our Pacific neighbors and endangers regional stability…”

It added, “To that end, the USCG is strategically homeporting significantly enhanced Fast Response Cutters … in the western Pacific … in Fiscal Year 2021, the USCG plans to evaluate the feasibility of basing Fast Response Cutters in American Samoa. If the survey is favorable, the United States could further expand its presence in the South Pacific.”

The Sentinel-class Fast Response Cutters that are going to be pressed into service are described by the US Coast Guard as “a key component of the Coast Guard’s offshore fleet that is capable of deploying independently to conduct missions that include port, waterways and coastal security; fishery patrols; search and rescue; and national defense.”

The US is therefore hitting China where it hurts the most. And now, the tyrannous reign of the Chinese fishing mafia may be heading towards an unceremonious end, even as the US Coast Guard comes for it with capable Cutters.