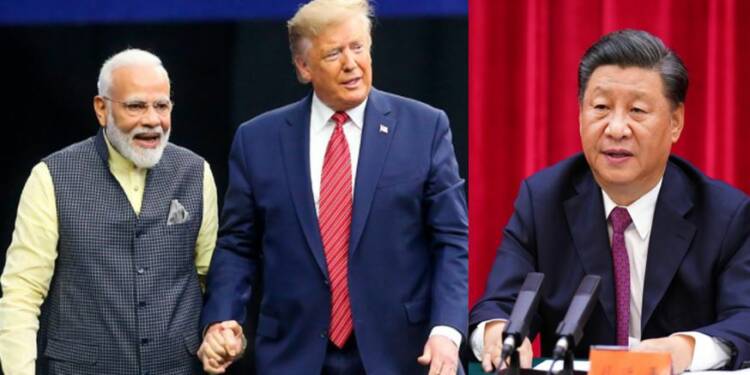 India and the US yesterday inked the historic Indo-US Basic Exchange and Cooperation Agreement (BECA) at the 3rd annual US-India 2+2 ministerial dialogue in New Delhi. However, as soon as the pact was signed by the two global superpowers, bringing them closer militarily, India’s neighbouring country China was left visibly rattled by the developments, and as usual, came the veiled threats from Beijing which exposed its insecurity about the growing military ties between Washington and New Delhi.

Leading the charge was Global Times editor-in-chief Hu Xijin who seemed shaken and disturbed by the developments. True to his nature, Xijin resorted to making snide yet brain-fade remarks which were on the line of his grandiose yet degenerate verbose that the International media has grown accustomed to hearing over the last few months.

“Congratulations to India for becoming one of the US’ many lovers, and winning itself a small gift that can temporarily satisfy India’s self-esteem” tweeted a miffed Xijin.

Congratulations to India for becoming one of the US' many lovers, and winning itself a small gift that can temporarily satisfy India's self-esteem. pic.twitter.com/oEG1sjX6VG

Global Times had earlier showed its discontentment by claiming that India was using the signing of BECA to flex its muscles in front of China. If the editors of Global Times are still naïve to the fact that India is indeed showcasing its might by this collaboration then Hu Xijin and co. need a reality check.

The editorial piece read, “The Trump administration wants to use it as a fillip for his reelection, and India to flex its muscles to China rather than as a factual consolidation of diplomatic and security ties, as many foreign media have hyped.

The BECA agreement will further enhance the interoperability of the two militaries of India and the US which will be able to share geospatial information & intelligence, helpful for defence-related issues. For example, it can help India track Chinese border buildup better as well as increase the accuracy of Indian missiles. Also, it is a key step for India when it comes to acquiring armed drones such as MQ-9B from the US.

Consequently, in the run-up to the ministerial meet, China had tried to play down the deal and continued to draw parallels that India would never be an ally as strong as Japan for the US.

One of the earlier editorials read, “India-US ties will be deepened, especially in the military field, but they will not form a traditional alliance like the one between the US and Japan as the purpose of the US wooing India is to serve its global strategy, not to make India stronger.

Japan and China have never been traditional allies and in the aftermath of COVID-19, Japan has given a bloody nose to China on several occasions and therefore Beijing relying on Tokyo’s shoulder to fire the gun and play down the alliance of India and the US is as funny and paradoxical a situation can get.

While the signing of the BECA was enough of a heartburn moment for the Politburo in Beijing, the comments of Secretary of State Mike Pompeo further enraged the paper dragon.

After talks with National Security Advisor Ajit Doval, in which the Ladakh confrontation was discussed, Mr. Pompeo had remarked: “The US will stand with India in its efforts to defend its sovereignty and its liberty… Our nations are committed to working together into expanding our partnerships across many fronts.”

A frustrated Beijing was quick to latch onto the statement of Pompeo and said the development of bilateral ties between countries should not “infringe upon legitimate rights and interests of a third party” and should be conducive to regional peace, stability and development. This was a message to the US to simply stay away from India.

Another Chinese statement read, “The boundary question is a bilateral matter between China and India. The two sides have been discussing disengagement and de-escalation in the border areas through diplomatic and military channels. China and India have the wisdom and ability to handle their differences properly. There’s no space for a third party to intervene.

China talking about de-escalation talks is indeed laughable because several of the commander-level talks between the two countries have only failed because of China’s childlike antics in refusing to budge from the border near LAC.

As Reported by TFI, the signing of BECA, if looked in the backdrop of the relations among the QUAD member countries, becomes all the more significant. After the signing of BECA, all three of the four members of the QUAD have become military allies of the USA and if anyone was not sure of QUAD being institutionalized, then this should clear all doubts.

Taking all these developments in mind, it was only natural that a flustered China was going to release a flurry of statements. However, an unperturbed New Delhi continues to march on and the paper dragon is still releasing one op-ed after another to satiate its bruised ego.