Why do IMF and World Bank keep bailing Pakistan out? Well, China

IMF and World Bank are compromised 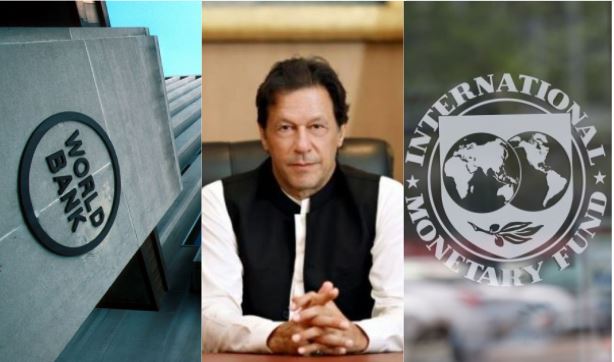 Pakistan is a quicksand of money. You put more and more money into the Islamic Republic and the next thing you know is that all of this money gets sucked into the military regime operating the country or the countless terror factories operative on Pakistani soil. Yet, the world’s two most reputed, intergovernmental financial institutions- the World Bank and the International Monetary Fund or IMF keep helping Pakistan sustain its fragile economy.

Even while pumping money into Pakistan, any lender will have a fair idea that Islamabad will embezzle all the aid being given to it. Yet it seems that Pakistan gets lucky with the IMF or the World Bank every single time, simply because of the pressure and influence that Pakistan’s godfather, the People’s Republic of China gets to exert upon these two institutions.

China pumps in a lot of money in international financial institutions, and it will rather have its client state Pakistan borrow a major share of this money, as opposed to any other country that actually deserves financial aid.

And therefore Pakistan’s love affair with the IMF, in particular, isn’t any ordinary story. Since 1958, when the Islamic Republic sought assistance from the IMF, Pakistan has been able to secure bailout packages from the Washington-based organisation 22 times. Pakistan even enjoys an ongoing $6 billion IMF bailout package which is supposed to curb government debt and avert a Balance of Payment crisis.

In April this year, Islamabad also managed to get the IMF Executive Board to approve a US$ 1.386 Billion Disbursement that was supposed to help Pakistan in its battle against the Wuhan Coronavirus. In the month of May, the World Bank also approved a US$ 500 million loan to Pakistan on the pretext of helping the Islamic Republic fight its ongoing economic crisis.

Pakistan has been in the Paris-based Financial Action Task Force grey list since June 2018. Yet, Islamabad has failed to take any action against the UN-designated terrorists like Jaish-e-Mohammad chief Masood Azhar and Lashkar-e-Taiba commander Zakiur Rehman Lakhvi. Pakistan has barely managed to not get blacklisted by FATF. Islamabad’s track record in battling terror financing is bizarre and this should have made it difficult for Pakistan to secure IMF or World Bank bailouts.

But don’t be surprised towards the kind of magnanimity that Islamabad gets from the World Bank and the IMF. Increasing Chinese influence in both IMF and World Bank has been getting the two institutions to make some not-so-prudent decisions. China is the third most powerful member in both the IMF and the World Bank next only to the United States of America and Japan.

The increasing Chinese influence over the past one decade or so in the IMF and the World Bank has led to Beijing fooling the World Bank about the ‘Ease of Doing Business’ rankings, the World Bank painting a rosy picture of Chinese economy even after getting fooled by Beijing and also giving billions in aid to the People’s Republic of China even though the paper dragon has emerged as an exploitative lender itself.

As for the IMF, the Washington-based institution recently went as far as mentioning the island nation of Taiwan as a Chinese province. Clearly, the IMF succumbed to Chinese pressure and tried endorsing the ‘One China’ policy only in order to appease the paper dragon.

Thus, Chinese pressure can be too intense to sustain for the IMF or the World Bank. Perhaps, this is also why the World Bank keeps preparing pro-Pakistan reports. The World Bank goes as far as stating, “Pakistan has important strategic endowments and development potential. The increasing proportion of Pakistan’s youth provides the country with a potential demographic dividend and a challenge to provide adequate services and employment.”

A World Bank blog goes even further to state, “If the country can make the right decisions now, Pakistan can accelerate and sustain growth to become a confident upper middle-income by the time it turns 100. It’s ambitious but possible.”

The World Bank keeps creating a positive outlook about Pakistan, but it doesn’t even care to mention how Islamabad is sponsoring and abetting terrorism in the region. Such reports only tend to create a case for bailout packages and aid programmes to Pakistan.

In order to meet their own goals, the IMF and World Bank must have come out with some hard-hitting reports about how international aid tends to get embezzled in Pakistan. But it seems that Chinese pressure is too hot to handle, and therefore the IMF and the World Bank keep bailing Islamabad out.

Kicked by the US, then Russia and now France, Pakistan has no one but China for defence imports