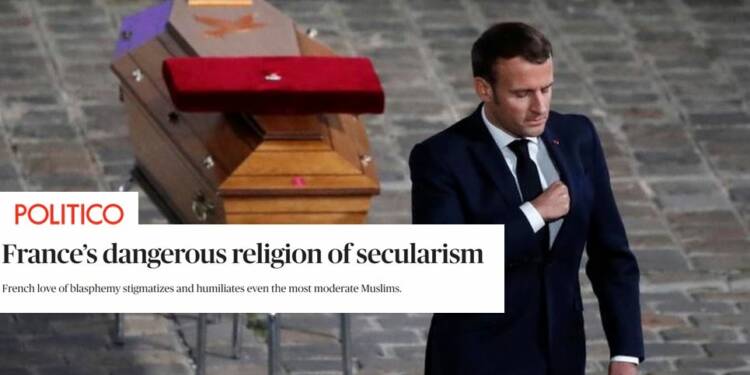 When Emmanuel Macron rose to power in 2017, the liberal fraternity across the world erupted in joy as they felt that they have added yet another leftist leader to their elite group. Fast-forward to 2020, the same Macron has turned into the most hated guy among as he prioritizes France’s security over being politically correct. The extent to which how deranged the left especially in America is can be gauged from the fact that the Western Media instead of condemning radical Islam for the dastardly terror attacks in France are hitting out at Emmanuel Macron as they blame France’s “radical secularism” for the attacks.

One needs to be really deranged and morally corrupt to defend the Jihadi attacks and that’s exactly what the Western media has been doing as it attempts to downplay the attacks and blame Macron. French President Emmanuel Macron has adopted a no-nonsense approach after the terror attacks and has shed political correctness. Macron has stated that Islam is a “religion in crisis” that needs to be “reformed” which has not gone down well amidst the liberal quarters with the Western media unleashing a full-blown propaganda war against Macron.

America-based Politico’s European outlet, Politico Europe ran an article titled, “France’s dangerous religion of secularism” where it claimed that, “French love of blasphemy stigmatises and humiliates  even the most moderate Muslims.” The article further claims, “An extreme form of secularism and embrace of blasphemy, which has fueled radicalism among a marginalized minority.” The publication slammed Macron and other French secularists’ for “obsessive focus on Islam, the veil, daily prayers or Islamic teachings.”

There they go… justifying Jihadist attacks & blaming it all on France's 'radical secularism'. USA's liberal media will go at any length to save Islamists & that 'Islamo-leftism' is being recognised by the French, hurts them. Proof that the American left is the most deranged. https://t.co/psqUgCbytX

Look how cleverly Politico has whitewashed the attacks by portraying Muslims as the ‘victims’.

The Washington Post came up with an even more cringeworthy article titled, “Instead of fighting systemic racism, France wants to ‘reform Islam.’” What is wrong if Macron wants to reform Islam in the light of the successive terror attacks?

The publication toed a similar line like Politico as it also claimed that Muslims have been radicalised due to being marginalised in the French society.

The publication then chose to give a history lesson as it claimed that France was yet to recover from the trauma of its ‘humiliating defeat’ in Algeria in 1962 with the French citizens seeing “public traces of Islam as aggressions against the country’s secular essence”. It also taunted Macron and France’s fierce love for secularism by disdaining how France “still closes for business on every major Catholic holiday.”

The New York Times was not to be left behind as it took time from its busy schedule of vociferously campaigning for Joe Biden and the Democrats as it ran two articles with the sole aim of portraying Muslims as the real victims and Macron as the villain.

“After Terror Attacks, Muslims Wonder About Their Place in France” read the headline of an NYT article. The article claims, “French officials’ attack on “Islamic separatism” and the “enemy within” has Muslims questioning whether they will ever fully be accepted.”

The article played the age-old tactic as it featured a certain Mehdy Belabbas who after the Macron-led French government’s announcement of cracking down against Islamic “separatism” is considering whether he should leave France.

The publication quoted Belabbas as saying, “After this attack, five or six million people have to justify themselves. But we just don’t know what is expected of us.”

In another article that mirrors the rant of Washington Post against Macron, NYT questioned, “Is France Fueling Muslim Terrorism by Trying to Prevent It?” The article claimed, “Emmanuel Macron’s government may unwittingly be breeding the kind of communalism it wants to ward off.”

The essence of all the articles are similar as if a memo was received from the American Left to slam France’s avowed love for secularism and portray the Muslims as innocents who are being hounded by the Macron government after the terror attacks. Macron’s statements by no means have been disrespecting towards Islam and he has publicly stated his desire to transform Islam into a religion of enlightenment. He has also stated that while he understands the shock caused by the cartoons, however, violence is not the answer. Macron is only trying to prevent radicalisation of the Muslims and is being slammed for the same by the Western media whereas the latter chooses to give a free pass to fundamentalists like Mahathir Mohamad who have openly called for the massacre of the French people in the “millions”.

It seems that USA’s liberal media and Qatari media like Al Jazeera, will go at any length to save radical Islamists with the fact that ‘Islamo-leftism’ being recognised by the French including Macron, has caused much heartburn among liberal circles.

If the Nagorno-Karabakh conflict spreads to Armenian Border, Russia will take necessary steps