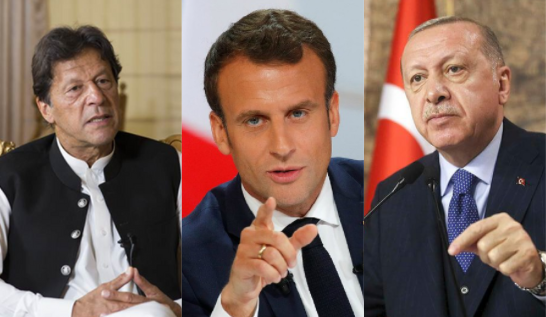 The French response to extremist Islamists has rattled the terrorist states of Pakistan and Turkey. These two hubs of radicalism have become angry as France has embarked on a fight against Islamists. President Emmanuel Macron has been at the forefront of this fight against extremists & Islamists. These actions have led to terror sponsor Erdogan making highly objectionable statements against Macron. As a protest, France has called back its envoy from Turkey.

The Turks and Pakistanis have interestingly not at all condemned the beheadings and killings. Rather, they have come to all guns blazing at the same people who are trying to fight the menace of extremists. Turkey is moving towards a Pseudo-theocracy under Erdogan and its first lackey is the failed state of Pakistan.

However, the French do not look like they are in any mood to let go of the beheading of the history teacher Samuel Paty without any consequences. This brutal killing has shocked entire France and President Emmanuel Macron is addressing the anger by cracking down on the Extremists and Islamists secessionist forces working in France.

French people have had enough of political correctness and Islamists are using it as a shield against the repercussions of killing, beheading and terrorizing people. To protest against the beheading of the French history teacher for showing the Charlie Hebdo cartoons as an example of freedom of speech, the French people projected Charlie Hebdo cartoons on the government building.

Read more: An anti-Islamist movement has started in France and it will change Europe’s immigration policies forever

Emmanuel Macron is not looking to back down in the face of comments from the terrorist states, and in a series of tweets expressed France’s resoluteness. He said, “Freedom, we cherish it; equality, we guarantee it; fraternity, we live it with intensity. Nothing will make us back down, ever.” And then added, “Our history is that of the struggle against tyrannies and fanaticisms. We will continue.”

Turkey’s President and a wannabe Ottoman Caliph, Recep Tayyip Erdogan has now gone beyond all the limits of decency expected out of a world leader. As reported by Reuters, Erdogan said, “What is the problem of this person called Macron with Muslims and Islam? Macron needs treatment on a mental level.” This not so leader like comment has made France recall its envoy to Turkey.

And when Erdogan is saying things against Macron, how can his lackey Imran Khan stay silent. Imran Khan also while staying silent on the issue of the beheading of the French teacher by Islamists, and following Ankara, slammed French President for his views on Islam. These comments come at a time when he is himself under scrutiny for increasing intolerance & unofficial religious persecution in Pakistan.

Pakistan, a country void of any larger idea of itself has now become the second fiddle of Turkey. Both the countries are well-known sponsors of terrorism and are together in criticizing France for cracking down on the Islamists. All of this has now led to calls for a boycott of French goods on social media. The Pakistanis have become the IT cell of Turkey, and are furthering the call for a boycott of French products on Social Media.

Pakistan has also been supplying its radicalized population for offshore terrorist activities. And its citizens are perpetrating terror acts even in France. The recent stabbing incident outside the former Paris offices of satirical newspaper Charlie Hebdo was perpetrated by a person who came from Pakistan. Not to anyone’s surprise, this Pakistani Islamist’s parents back in Pakistan were proud of their son’s actions (it shows the extent of radicalization).

This Turkey and Pakistan bonhomie is the brotherhood of two evil. These two terrorist states have been acting in a way which is counter-productive for the Arab world and larger Muslim world as they are trying to move out of the mould of extremist Islam to a more open and accommodative Islam.

Ankara & Islamabad have become experts in supporting extremist terrorist activities, be it in India, in many of the Turkish neighbours and now even in Europe. As Emmanuel Macron has taken on the Islamists & extremists upfront, both Turkey and Pakistan seem rattled. Macron, in an emotional address, said, “We will continue professor (Samuel Paty). We will continue this fight for freedom, this fight to defend the Republic of which you have become the face.”

As everyone is aware of the saying, that ‘when France sneezes, the whole of Europe catches a cold’. How French President Emmanuel Macron is taking sweeping actions against the Islamist secessionists and extremists, it is bound to set a precedent for the whole of Europe to follow. The Arab world is taking note of the change in mood, thus, evolving their society and interpreting Islam in a more accommodative light. As Europe under Macron’s leadership unites against the Islamic extremism, Turkey and Pakistan would be forced to either shed the extremist tendencies or get isolated.