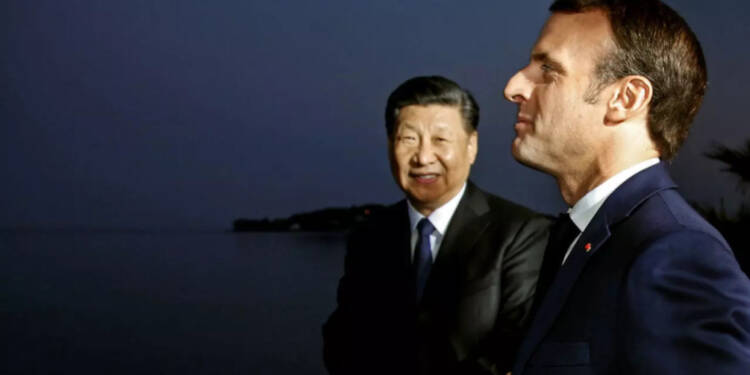 China is actively trying to bid for the French Nuclear technology reportedly in a deal worth billions of dollars. The US-based news organization, The Klaxon has called it the newest tool in China’s “debt-trap diplomacy”. Scholars have suggested that China, by using the disguise of warming up relations, will use Nuclear technology against those who dare to stand up against its warmongering behaviour. The Chinese state-owned ‘China National Nuclear Corporation’ has been aggressively trying to obtain French technology from State-controlled nuclear energy giant Orano, for the past decade.

The deal which was on the verge of finalization in 2018 was stalled due to “serious security concerns” raised by France’s national security agency. The concerns were legitimate as China has had a record of sharing sensitive technology to countries that openly use it to threaten other countries like Pakistan. Yet China is making desperate attempts to acquire the technology as it looks towards doubling its nuclear warheads matching the capabilities with Russia and the US to intimidate India, Japan, Mongolia, and south-east Asian countries to name a few. For China, the clock is ticking since the US is going to call China into participation in Nuclear Treaties like START along with Russia, which is what Sweden is pushing for as well. This is the reason for the haste from the Chinese side. However, the flow of recent tides suggests the contrary.

With the recent events, France has come to realize the implications of a hegemonic China and who are its real friends. India and its allies have supported France in its dealing with another want-to-be hegemon Turkey. Initially, France used to be sceptical towards offending China because the business was booming, but gradually things have changed, the world is realizing the dangers of ill-intentioned Chinese expansionism, not just territorial but in every sector like the recent coronavirus pandemic which allegedly was a Bio-Warfare agent type attack on the whole world. In the light of this realization, President Emmanuel Macron appointed Christophe Penot, former ambassador to Australia to the new post of ambassador for the Indo-Pacific.

The advent of Chinese-born Coronavirus has led European countries to reconsider their actions with China which were taken with the business into consideration. The world is now actively looking with scrutiny at Chinese actions in the territory of Hongkong, incursions in Indian Territories, the treatment of Uighur Muslims in Xinjiang, ill-treatment of ethnic Tibetans, military aggression in the South-China Sea, and interfering in local politics in Pakistan and elsewhere. Now after Germany, France has become one of the then big powers who have changed their vision towards China.

Read More: China put all its might at snatching French territory New Caledonia, but France has just struck a deadly blow

France is a mighty maritime power with a powerful presence in the Indian and Pacific Ocean. It has nuclear-capable submarines and surveillance capability through its satellite technologies. With all this France is ready with open arms to work with India in the maritime world. India is one of the handfuls of countries in the world, which took a stand against China’s malpractices right from the beginning. The brave actions by India have already blown the myths about China’s military might and economic dominance. If by any means war becomes inevitable, China is bound to lose against the Indian army just like the Vietnamese did.

The Quad has been labelled many times as a partnership with its foundations lying in shared interests and not binding obligations. It aims towards making the Indo-Pacific a free, open, and transparent space, any country with a similar vision is welcomed since it’s not an exclusive grouping. The Paris vision seems like a complementary tool towards achieving greater good for the Indo-Pacific region. Therefore, the inclusion of France in the Quad appears to be a wise choice.

Read More: France joins India and Australia in the Indo-Pacific and it has sent two strong messages to China and Pakistan

It looks that France is also willing to be incorporated in the global fight against hegemonic China and it is all because of the foreign policies of arrogant President Xi and his band of Wolfwarriors who are very un-warrior-like. The Chinese have miscalculated the entire sequence of events and its belligerence is of no use now. The spontaneous actions by India, the US, and their allies have stalled it, the deal with France will be difficult and it could take another decade if not more. Hence the forward journey for China seems risky and it is evident that the legitimacy of the Communist Party shall soon be questioned internally.