Germany is all in 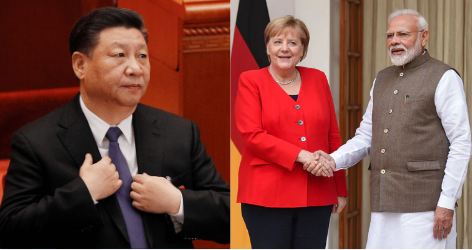 Germany, for long, has lived in an exclusive bubble of the 20th-century geo-politics. However, the whole world is moving towards the Indo-Pacific, as it has become the 21st-century theatre of geopolitical conflict. In light of these re-alignments, Germany has come to a realisation that it needs to shift its focus towards the Indo-Pacific. In a latest move, German Defence Minister, Annegret Kramp-Karrenbauer, has said that Germany will be deploying one of its warships in the Indo-Pacific. It will help to safeguard the rule-based world order.

As Germany has come out of the closet with their Indo-Pacific policy and is looking for strategic partners in the region, India’s Foreign Secretary Harsh Vardhan Shringla has visited Germany, which is part of his three-nation European tour. Shringla has welcomed Berlin’s Indo-Pacific strategy and also highlighted the commonality of interests in dealing with the menace of terrorism.

Germany has now shed its appeasement of the Chinese Communist Party and has joined France in the effort to team-up with the Quad countries. In an interview to Sydney Morning Herald, the German Defence Minister said, “We believe that Germany needs to mark its position in the region.” She added, “We will be spending more on defence in 2021 than in 2020 despite the fact that [the Covid-19 pandemic] has hit our budgets. Now the key is to translate this into real muscle.”

Berlin has for a long time tried to be in the good books of Beijing. It thought that the business interests and profit margins were too large to antagonise China. And at the centre of this reasoning was the perception that China is not a security threat. However, as of late, Germany had to come to terms with the fact that the importance of Indo-Pacific has surpassed the geostrategic importance that the Atlantic Ocean had in the 20th century. Which is why recently Germany launched its Indo-Pacific strategy focusing on the Quad in general and India in particular.

The visit of India’s Foreign Secretary for high-level strategic talks to Germany amid COVID-19 pandemic is significant. His 12 hours of continuous engagements in Berlin, at the Federal Chancellery, Foreign Office, and with the media and leading think tanks are meant to strategise collaboration in the Indo-Pacific.

Foreign Secretary @harshvshringla begins 12 hours of back-to-back engagements in Berlin, at the Federal Chancellery, Foreign Office, and with the media and leading think tanks. pic.twitter.com/nn24xT98Vs

The meeting of India’s Foreign Secretary and his German counterpart, Miguel Berger, has focussed on India-Germany alignment in the reform of multilateral institutions for 21st-century realities, Germany’s Indo-Pacific strategy and its compatibility with India’s approach. All these points are in line with the German Defence Minister’s comments in The Sydney Morning Herald.

She mentioned that the trade ties with China are of importance for both the countries. However, she also said, “I am convinced territorial disputes, violations of international law and China’s ambitions for global supremacy can only be approached multilaterally,” adding that conflicts in the region “would have global repercussions were they to erupt”.

In line with this, India’s Foreign Secretary Shringla told his German government interlocutors that India has noted that Berlin’s Indo-Pacific guidelines recognise the importance of diversifying supply chains and that both countries have a convergence of interest in that regard.

Germany has been reaching out to the entire QUAD and has now reached out to Australia. This comes on the backdrop of the Shringla’s visit to Berlin. Germany has also increased its engagement economically with Japan in the energy sector. It shows the obvious trend that Germany wants to continue to be a relevant big global power and it is trying to converge with the Quad member countries.

Germany took too long to realise that the Atlantic is no more the centre of the world and has lost a lot of support even in the European Union. As the western countries became suspicious of Germany shying away from commenting against China’s Human Rights Violations, Berlin is now trying to mend its ways.

It has now realised that the security risk that a belligerent China poses, far surpasses the economic profit it provides. And as Berlin has already been late in coming up with an Indo-Pacific policy, it wants to fast-track its engagement in the region by coupling itself with the Quad countries and contributing its bit.

Thus, we can expect that in the coming days, Germany is most likely going to increasingly weigh in onto teaming up with the Quad countries and as it sends its warship into the Indo-Pacific, it is surely going to work in tandem with India.