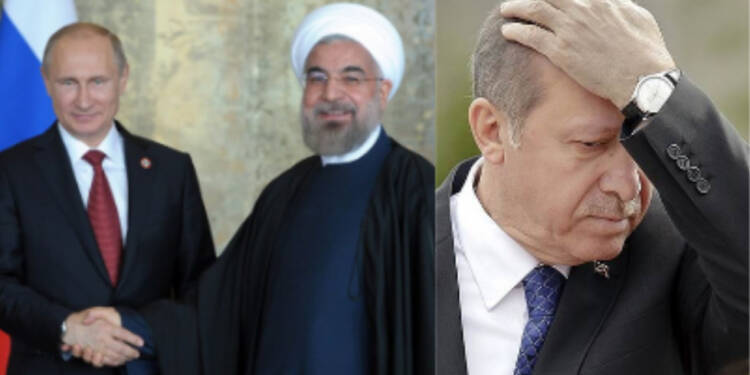 After having already backed Armenia with military escalations, Russian President Vladimir Putin has called upon Iran to befuddle Turkey. Turkey’s ambitions to play a major role in the ceasefire negotiations have irked a lot of regional powers. Incidentally with Iran’s involvement, Turkey finds itself in a precarious position of deciding to either face Russia on the battlefield or give up its ambitions.

Russia is considering an Iranian proposal for ending the conflict between Azerbaijan and Armenia for the Nagorno Karabagh region which is already in its 6th week and shows no signs of de-escalation.  Russia has roped in Iran to counter Turkey’s role and ultimately its ambitions in the region. Moreover, Iran’s leading role in the peace talks and Moscow’s unilateral support to Armenia has trapped Turkey, and now it has a decision to make.

Iran shares Moscow’s vision for peace in the region but does not give credibility to the Minsk Group, which includes the United States, Russia, and France and thus has proposed a leading role to end the conflict. Iran’s proposal was made by deputy Foreign minister Abbas Abaqchi during a visit to Moscow last week and outlined that it does not wish to propose a ceasefire but to settle the conflict within a framework which becomes effective when both sides undertake to remain committed to a series of principles and remain in effect as more measures are adopted, including the withdrawal of occupying forces of all occupied areas.

Iran’s initiative is driven by strong security considerations. The last thing Iran wants is a spillover of the conflict. Iran enjoys friendly relations with Armenia, Azerbaijan, and Georgia, and has economic cooperation with them, especially in energy, that could get disrupted if the conflict continues.

Iran’s preference all along has been for a regional initiative and a regional solution, which is, of course, a principle Iran has consistently upheld over the years.

Iran and Russia both understand that a ceasefire can only be a temporary patch-up and the core issues must be addressed, including Turkey’s role in providing resources to Azerbaijan to keep the conflict ongoing.

With Iran’s arrival as a leading peacemaker, Turkey finds itself with an unhealthy prospect of either giving up on its ambitions for expansion of its regional influence or face the wrath of the Russian military on the battleground.

Erdogan’s push for a greater role on the negotiation table has already extended the conflict by weeks and broken through three ceasefire negotiations.

Now with Iran involved, Russia hopes that Erdogan will find reason in a peaceful dissolution of the conflict without pushing further its agenda of regional dominance.

In a conflict that has already claimed more than a thousand civilian lives, it is of utmost importance to find a solution as soon as possible. By involving Iran, Putin has sped up the process of finding a solution.

Moreover, the odds in any diplomatic or military standoff are against Turkey. With Russia and Iran recognizing Turkey’s involvement in arming up Azerbaijan and sending terrorists to fight in the war, The United States has also condemned Turkey’s involvement. Moreover, an armed struggle directly against Russia is a situation Erdogan would want to avoid at all costs.

Besides, Tehran also shares Moscow’s concern regarding the presence of terrorist elements in the region. Therefore turkey’s involvement in providing terrorist fighters from Syria to Azerbaijan will also be deeply criticized if the conflict fails to reach an end.

Erdogan’s ambitions of a rising Caliphate pushed Turkey to feed resources into Azerbaijan but now it finds itself surrounded diplomatically and, militarily. Putin’s move to involve Iran has certainly dismantled Turkey’s hopes of gaining influence in the region. Erdogan is now faced with a daunting task to deescalate the conflict or face Russia as the war inches towards the Armenian border. Both options will severely impact Turkey’s status and influence in the region and it does not have a way out.