Democrats hoped for a sweeping victory 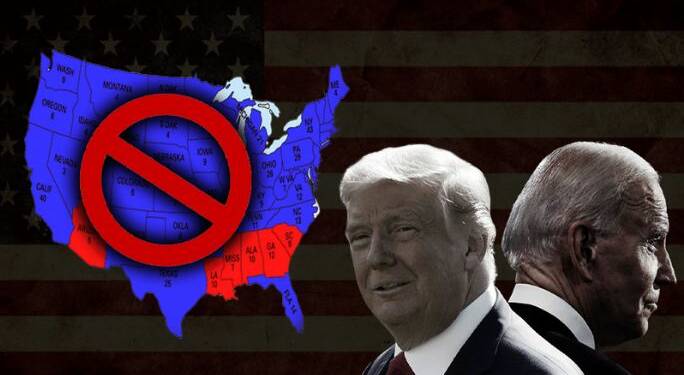 In the run-up to the 2020 US Presidential elections, the Mainstream Media of the US had proclaimed vociferously that Joe Biden and the democrats were going to storm into power riding on a landslide victory. However, nearly 36 hours later, since the results first started coming in, there is still no clear winner and those claims seem to have backfired. Donald Trump, against all the odds stacked against him, has mounted a spirited offense. The fight has become much closer than what the left had anticipated despite pooling all its resources and dedicating prime time TV slots to Biden’s campaign.

This wasn’t the first time that the left-media had pinned its hopes on one ‘blue-leader’ and rallied the campaign in his favour. The 2016 debacle by the US media is still fresh in the public’s memory. Four years ago, on the election day, The New York Times had published a meticulous, data-driven report with the headline, “After all Hillary Clinton has an 85% chance to win” and today that report is in the Hall of Fame club of “How not to predict any US election”.

But it looks like the MSM didn’t take any lesson from the embarrassment of previous elections and continued to parade their severely biased agendas. The pollsters predicted Biden to have an unassailable lead over Trump and practically proclaimed him as the 46th President of the United States.

Biden might have won swing states of Wisconsin and Michigan due to the mail-in ballots, which again are embroiled in serious controversies of fraud and inconsistent counting but the other states where Biden was seemingly leading are quickly turning to red.

With only 75 percent votes tallied in Nevada and Trump trailing by only 8000-odd votes, the race is too close to call at the moment and if the republican manages to snatch the state of Nevada then the loss of Michigan and Wisconsin could be mitigated, given Trump manages to hold onto other swing states like Pennsylvania and Georgia.

The 2020 election should prompt a soul-searching drive for the Democrats and the left-biased media alike, for they spent every bit of their energy trying to create a mirage of a Blue wave, only to see it spectacularly blow up in their face. Democrats even threw former President Barack Obama in the fray to gain the voters in quest for a Blue America but that ploy seems to have not worked either.

It indeed is the truth that Democrats didn’t innovate a bit while taking on Trump and relied on the echo-chambers of Mainstream Media which had let them down spectacularly in the 2016 elections. Trump was able to run so close to Biden despite the coronavirus pandemic and what looked like record-breaking voter turnout in much of the country.

The fact the MSM tried so hard to make Biden the next prince for the United States could be gauged from the fact that Trump’s raucous campaign rallies were often covered live only by Fox News, whose viewers are already the president’s faithful. The collective snub was an effort to not allow Trump to have his reach strengthened.

If put into perspective, Trump was fighting against the entire left establishment, the democrats, the anti-incumbency, the entire bubble of Black Lives Movement which seemed to think Trump was the problem for the condition of Blacks in the country and last but not the least, a raging pandemic—all whilst maintaining a steady economy and low unemployment rate.

The upshot is that the Democrats couldn’t built up the sort of lead — in turnout or in vote share as the Left media had predicted on a large scale. There is no iota of doubt that several media organisation, in tandem, parading the same anti-Trump line would have influenced the voters and therefore, once again, the moral question of the role of media comes into play. Is media the gatekeeper whose sole aim is to report the news or is it the other way around, being an accomplice to a political leader and his campaign? Contrary to what left proclaimed, there is no Blue Wave in the States.