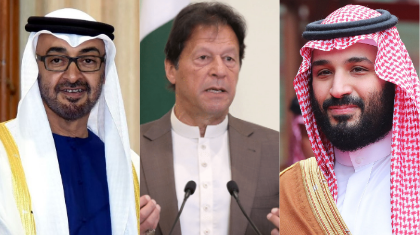 Pakistan has eternally been a cash strapped nation which is surviving on loans majorly granted by the International Monetary Fund, China, Saudi Arabia and UAE. However, Pakistan’s economy has considerably worsened under the tenure of Imran Khan as he undertook large-scale borrowing which the country simply cannot payback. Pakistan has now sought a rollover of outstanding loans worth $4 billion from its erstwhile traditional allies Saudi Arabia and UAE as the country is crippled with dwindling foreign exchange reserves.

The majority of Imran Khan’s tenure has been spent in first asking for loans with a begging bowl and whining at the first opportunity available and then lobbying for rollovers and debt relief. Now, the country has taken up hectic lobbying with UAE and Saudi Arabia to rollover loans of worth $2 billion which are scheduled to mature November-February period of the current fiscal year. Pakistan is also seeking a rollover of loans worth $3 billion from China.

Local media reports indicate that the Imran Khan government was forced to seek a rollover of the loans for another year to avoid further depletion of foreign exchange reserves with the country clearly not being able to pay back the outstanding loans scheduled to mature November-February period of the current fiscal year.

Earlier this year, amidst depleting bilateral relations, Saudi Arabia forced Pakistan to pay back $1 billion four months ahead of its repayment period which the latter comically took a loan of the same amount from China in order to payback the Saudi Kingdom.

In an alarming situation for Pakistan’s, the State Bank of Pakistan as of October possessed foreign reserves worth $12.21 billion with a major chunk of the reserves consisting of outstanding loans.

Relations between Pakistan and Saudi Arabia further plummeted after Pakistan’s Foreign Minister Shah Mehmood Qureshi suffered an outburst on Television as he gave an ultimatum to Saudi Arabia, saying that Pakistan will have to look for other options if the OIC doesn’t come forward in support of its stance on Kashmir.

Pakistan’s bonhomie with Turkey hasn’t gone down well with Saudi Arabia as the latter has also stopped the supply of oil to Pakistan since May after the expiration of the deferred payment deal.

The Express Tribune reported that the $3.2 billion Saudi oil facility was a part of the USD 6.2-billion Saudi Arabian package announced in November 2018 to ease Pakistan’s external sector woes. Pakistan is trying to renew the facility but the Saudis are yet to respond to Pakistan’s request.

It is ironical that the same Imran Khan who was drooling over the possibility of Turkey President Erdogan becoming the de-facto leader of the Muslim world thereby, alienating traditional allies like Saudi Arabia and UAE yet again finds himself at their mercy.