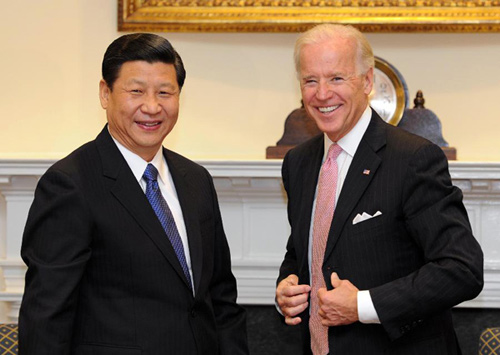 With Joe Biden pushing towards an apparent victory in the US Presidential Elections, Chinese belligerence has suddenly started going up in the Western Pacific all over again.

China is doing two things in the South China Sea to show a sudden spurt in aggressive behaviour upon Biden’s likely accession to power in the White House. Firstly, Beijing is looking to allow its Coast Guard to use weapons in the maritime zone that Beijing claims and secondly, the paper dragon is stepping up construction on small islets in the South China Sea in order to gain a strategic advantage over other stakeholders.

Beijing is giving two very specific messages here. It is, of course, telling Biden who is likely to succeed Trump that China is here to stay and consolidate its military posturing in the South China Sea. And secondly, it is signalling to QUAD- an informal coalition comprising India, the US, Japan and Australia to check growing Chinese influence that the man in power in Washington allows Beijing to have its way in the South China Sea.

Till now, the QUAD wasn’t letting Beijing express its will in the South China Sea region, even if the Middle Kingdom really wanted to do so. But now with chances of Biden coming to power, Beijing feels that the Quad might no longer carry the same kind of influence that it used to and therefore, the dragon feels that it has the liberty to flex its arms.

In fact, one of China’s parliamentary bodies has gone as far as unveiling a bill that would allow the Chinese Coast Guard to use weapons if foreign ships involved in ‘illegal’ activities in waters ‘controlled’ by the paper Dragon do not obey China’s orders.

Zhang Mingliang, Associate Professor at School of International Studies at Guangzhou-based Jinan University said, “This will be the first time that the coast guard is given power, explicitly by law, to use weapons in disputed waters.”

Beijing is therefore looking to unleash a new reign of terror with anticipation of Trump’s apparent defeat in the US Presidential polls.

Yet Chinese construction activity is a signal that Beijing feels greater liberty with the likely prospect of Biden’s accession to power, as against Donald Trump who was not giving any breathing space to China in the South China Sea and Western Pacific.

China’s sudden enthusiasm and feistiness is actually in line with what it had been propagating till now. China always knew that Biden isn’t as antagonistic towards Beijing as Donald Trump. Therefore, Beijing was quite openly rooting for Joe Biden for quite some time.

Now, that Biden is moving towards an apparent victory in the US Presidential polls, China has already started doing what it was expected to do- bully others in the Western Pacific without the fear of a proactive United States. China is deeply emboldened with Biden’s likely prospects of coming to power and the paper Dragon isn’t even hiding it.