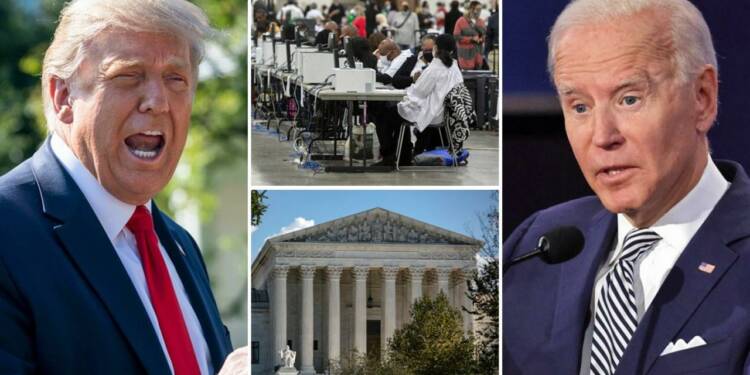 The US media has called the Presidential elections. And according to media outlets, Joe Biden is the new American President-elect. But it seems that the US Presidential Election results are not going to be as straight-forward as they seem to be. In fact, it seems that the American Supreme Court will be the one deciding who becomes the next US President. The Trump campaign has been alleging voter fraud in key states like Pennsylvania, which has cast a shadow of doubt over the Presidential polls.

The Trump campaign has launched a blistering assault over allegations of voter fraud and has vowed to take the matter before the US Supreme Court. Now, while the American media keeps claiming that the Trump campaign is disputing mail-in ballots without any evidence, there are reports and materials to suggest that all might not have been well with the American Presidential polls.

Trump’s lawyers have also claimed that the fight is not over in Philadelphia and Pennsylvania. Rudy Giuliani, the President’s personal lawyer, vowed at a Philadelphia press conference that a catena of new lawsuits is coming to challenge the “Democratic Party hacks” in the city that seem to have tipped the balance in favour of Biden.

Speaking from the parking lot of a landscaping business in Northeast Philadelphia, Giuliani said, “This city has a sad history of voter fraud.” He added, “It’s illegal. It’s unconstitutional. And we will be bringing action.” Trump himself too said, “The simple fact is that this election is far from over,” after the US media called the Elections in Biden’s favour.

Giuliani also alleged that “there was no inspection of a single mail-in ballot.” He added that “no Republican got a chance to look at that ballot.” He claimed to have witnesses who could help the Trump campaign mount an assault on the voting process in Pennsylvania. Giuliani said, “We’re going to have many, many witnesses. This is not a small case. This is going to be a big case.”

Nick Adams, an author endorsed by the President of the United States also tweeted, “300,000 ballots in Pittsburgh, Pennsylvania were not inspected by a single Republican Poll Watcher!!! This is FRAUD!”

BREAKING: 300,000 ballots in Pittsburgh, Pennsylvania were not inspected by a single Republican Poll Watcher!!!

From within Pennsylvania, which boasts of as many as 20 electors, clear allegations of irregularities in mail-in ballots are emerging. A US Postal Service whistleblower, Richard Hopkins, has even alleged backdating of ballots to November 3, 2020. He said, “Postmaster Rob Weisenbach directed my co-workers and I to pick up ballots after Election Day and provide them to him,” in an affidavit.

Similar allegations of voter fraud are also coming in from Nevada. Nevada GOP tweeted, “Our lawyers just sent a criminal referral to AG Barr regarding at least 3,062 instances of voter fraud. We expect that number to grow substantially. Thousands of individuals have been identified who appear to have violated the law by casting ballots after they moved from NV.”

Our lawyers just sent a criminal referral to AG Barr regarding at least 3,062 instances of voter fraud. We expect that number to grow substantially. Thousands of individuals have been identified who appear to have violated the law by casting ballots after they moved from NV.

In another tweet, Nevada GOP stated, “Father of a 17 yo who registered & received ballot thankfully contacted county re: his ineligibility…The Radical Left dreams to lower voting age but… they can’t legally vote!”

Father of a 17 yo who registered & received ballot thankfully contacted county re: his ineligibility…

The mainstream American media keeps claiming that Trump is making allegations of Democrats trying to “steal” the Elections without any evidence. But there are enough testimonies and other materials to suggest that at least the poll process doesn’t seem to be thoroughly clean on the face of it.

Even in Michigan, it is being alleged that software used to tabulate votes in one county sent at least 6,000 Trump votes to Biden. 47 counties are said to have used the same software and if such glitches have taken place elsewhere also, then the electoral results would certainly not be very reliable.

This is big. The software used to tabulate the votes in one county sent at least 6,000 Trump votes to Biden. 47 counties used the software. Other states may have, too. Was it a glitch or a "feature"? pic.twitter.com/eeV4VebbPd

Voter fraud allegations are emerging from key States like Michigan, Pennsylvania and Nevada which can easily swing elections towards a particular side. And then, most of these States have gone Biden’s way with narrow margins. The American media might have called the Elections, but it seems that the US Supreme Court will decide who becomes the next US President.

Romania says no to Huawei, and that marks the final victory of Donald Trump over Xi Jinping