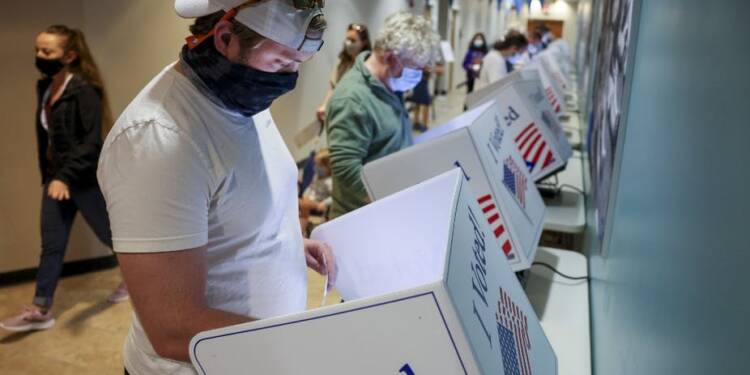 The US elections results have kept the entire globe on its tethers for over 24 hours now and with discrepancies starting to emerge in the counting process, no clear winner has emerged so far, and even if one does, the probability of the election results dragged to the Supreme Court seems extremely high. In nutshell,  the fragility of the US election system stands exposed with the world’s oldest democracy taking days and weeks to count votes. Countries like India and especially its voters are gawking in amazement at the confusing and sluggish electorate system of the US whilst simultaneously democracy taking pride in the efficiency of its very own Election Commission.

The US has a different poll-structure which decides how a President is elected. There are 538 electoral votes in the entire electoral college of the country (435 members of the House of Representatives, 100 members of the US Senate, three members of the federal capital — the District of Columbia). Each state has a specific number of electorates decided on the basis of the population of the state. For example, a densely populated California has 55 electorates whereas a sparsely populated state like Wyoming has only 3 electorates.

The Democratic and Republican parties have each developed solid bases in a series of states that are all but certain to vote for them in a presidential year. But the Electoral College winner is more often than not determined by those few swing states that are more divided politically and look like they could go either way. This year the swing states have been Michigan, Wisconsin, Arizona Pennsylvania, Georgia, and North Carolina–the first three having gone Biden’s way which Trump had turned red in 2016.

The magic figure for getting keys to the White House is 270 but this is where the confusion begins. In India, whosoever gets the most votes is deemed the winner—it’s as simple as that and it takes seconds to wrap one’s brain around this simple mathematics. However, in the US the popular votes do not always mean an outright victory.

For example, Hilary won 65.8 million popular votes in 2016, whereas Trump won 63 million. However, what played in the President’s favour was the fact that his vote share was better distributed among the states than Clinton’s, enabling him to win the Electoral College and the presidency.

Even in 2000, Al Gore won half a million more votes than George W. Bush nationwide, but Bush won the presidency after he was declared the winner in Florida by a mere 537 votes. The 2000 elections had also gone to the Courts and it seems like 20 years down the line, Biden and Trump are set to lock horns in the Supreme Court.

But delving deeper into these statistics, one can figure out that millions of votes in some of the safe states end up getting wasted. Reason being, it makes no difference whether Biden wins California by 4 million votes, 400,000 votes, or 40 votes — in any scenario, he gets its 55 electors. Same goes for Trump, say in a state like Texas.

The swing states’ dominance is a consequence of the fact that almost every state chooses to allot all its electoral votes to whoever comes in first place statewide, regardless of his or her margin of victory.

The second problem in the US election has been the counting of mail-in ballot votes. With each state having its different sets of rules and regulations as to how they count these votes that have been pouring in for months now has led to chaos at the back end of US elections.

Nearly 64 million mail-in ballots were accounted for, before the Election Day, and some battleground states, like North Carolina, have been processing ballots for weeks. Elections officials had predicted to count 97 per cent of votes by Tuesday night, but the figure till the reports came in last has only reached the 94 per cent mark.

The Trump campaign said Wednesday it would request a recount in Wisconsin, which candidates can do if they are within 1% of the winner’s total. Biden has a roughly 20,000-vote lead after the county finished counting its absentee ballots Wednesday morning.

According to media reports, ballot tally errors in two counties had put Biden ahead of Trump, but alleged discrepancies have been reported that have altered those results.

The fact that ballot votes are being counted last has cast aspersions over the transparency of the entire system with the Trump faction repeatedly calling for mail-in voter fraud. The suspicions have only grown after the results in Michigan and Wisconsin, where Joe Biden’s vote share saw a  vertical rise after the mail-in ballots opened. The fact that Trump’s vote share remained static throughout the counting of the mail-in ballots is a difficult coincidence to imagine.

Scientific rigging and Booth capturing in #USElection and they say India's voting system is flawed pic.twitter.com/6gigZogarE

With such lethargy in counting the votes, it is only imminent that tensions will likely stir up within the communities of different ideologies. There is a reason why stores and supermarkets across the US had riot-proofed their establishments as they feared civil unrest.

To put it into perspective, imagine what would have happened in India if the General Election results took days to come out, and somehow magically, Rahul Gandhi started winning his Rae Baerali seat after being down and out for over 16-17 hours.

The total number of the electorate in India’s 2019 General Election stood at 91.01 crores which practically dwarfs the US population of the electorate. And yet, the Election Commission of India was able to count the votes with such finesse and efficiency. The biggest difference between India and America’s election system is that the postal ballots are counted first here, leaving no room for any opacity.

There is no centralised election management body in the US, unlike India. All 50 states in the US, and within them, 3,141 counties and twice as many cities and townships, organise the elections according to their respective systems while the ECI in India is a single powerful body that conducts the elections in the entire country with uniform rules.

The voting system varies from direct recording electronic voting machines (like the Indian EVMs) to paper ballots (marked by pencil or pen). But scanning is invariably used to facilitate counting.

The Election Commission of India is so efficient in handling the election process that even midst the COVID pandemic if there was a general election to take place, the EC would have been confident with people appearing in large swathes for the in-person voting.

Who wins the contest is a different ball game altogether but the least 2020 elections should do is push the US towards a better and a transparent electorate process where every vote counts, not only those of swing states.

The oldest democracy can learn a lesson or two from the largest democracy instead of constantly preaching on strengthening democracy and technological innovations. US election systems are archaic and compromised and there is a need for a major overhaul.