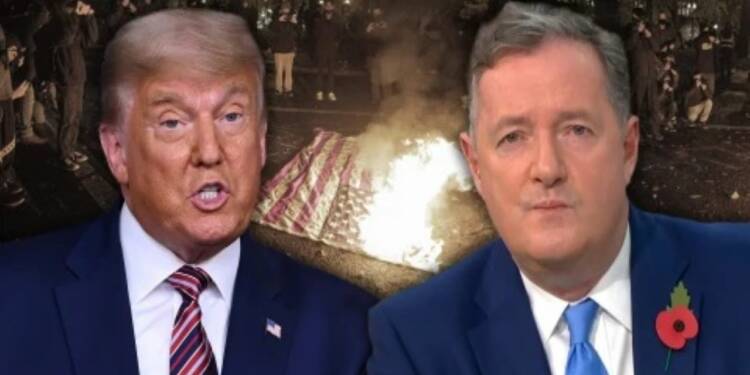 The liberal mainstream media is back with another pointless campaign to slander Trump. They are claiming that Trump’s interview with Piers Morgan, a British television personality, left the former US President embarrassed. It is being propagated that Trump stormed out of the interview mid-way because he couldn’t face ‘tough’ questions from the British television personality.

But what happened really? Well, Piers Morgan conducted one of the most shameful interviews ever. And why are we using the expression ‘shameful’? Well, we have four reasons why.

Not a great indication if the interviewee walks out

So, what happened? Trump was being interviewed by Morgan. And the viral teasers that are out on social media seem to suggest that Trump stormed out of the interview.

So, the liberal media narrative of Trump chickening out of the interview may be exaggerated.

Still worse, the teaser of the interview with a dramatic background score seems to flaunt Trump’s decision to walk out as some sort of an achievement.

And what is the idea behind the ‘Trump v. Morgan’ narrative? Is Morgan a politician? No. He isn’t even an American. So, there is no point in a face-off between the two. Remember, it wasn’t an election debate but an interview that was organized. So, making a fighting contest out of it is quite meaningless.

Morgan’s job was just to ask questions and seek Trump’s opinions. This is it. He had no job getting into a shouting match with the former President of the United States of America. And if Morgan reduced the entire issue into a debate, it is only disgraceful on his part.

Morgan’s judgment on US elections

In the interview teaser, you can hear Morgan say, “It was a free and fair election — you lost.” And you can hear, Trump reply, “Only a fool would think that.” Morgan however insists, “You think I’m a fool?” and Trump replies in the affirmative.

So, Morgan was saying that the election was free and fair, and Trump has lost. This is exactly what Democrats say and this is exactly the line that the American mainstream media too pushes. Piers Morgan seems to be echoing the same sentiment, which is why you see many Democratic Party supporters rally behind him.

However, it is worth noting that there were many serious allegations of the 2020 polls being stolen. Whether they were free and fair or not is a different matter. However, we do know that Morgan has no authority and no means to judge whether the elections were free and fair. This is out and out propaganda, and pretty shameful at that.

Bring a big man to the show, especially if a new talk show is being organized and it gives you immense popularity. You get engagement with both kinds of people- those who agree with you and those who don’t agree with you. This is however called cheap publicity and this is exactly what this interview seems to have done.

Not everyone would have known Piers Morgan till now. But with his feud with Trump, everyone seems to know him now, be it his critics or those who are in agreement with him.

Piers Morgan’s interview with Trump, therefore, goes down as one of the most shameful interviews in a long time.